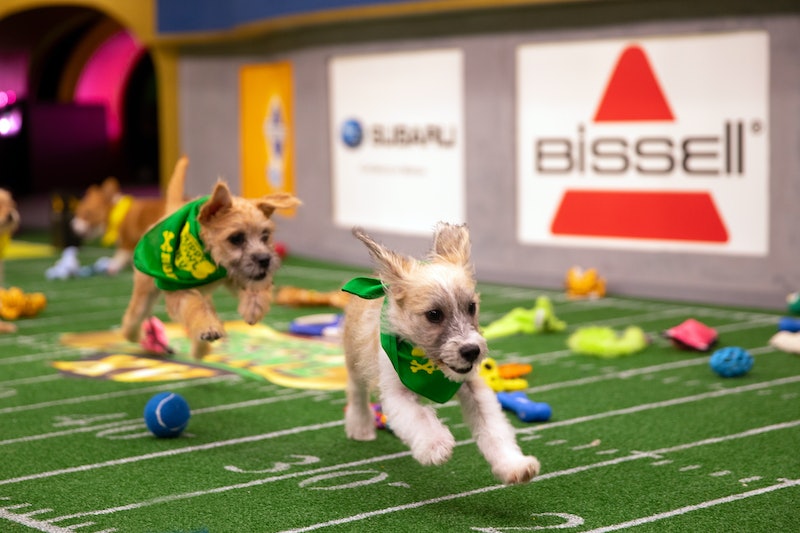 The only flaw with the Puppy Bowl, Animal Planet's adorable answer to the Super Bowl, is that it only airs once a year. The annual face-off between Team Fluff and Team Ruff for the "Lombarky Trophy" has aired on the same day as the NFL's more popular and less cuddly Super Bowl every year since 2005. This year marks the 15th iteration of the Puppy Bowl, providing hours of new footage for puppy enthusiasts to distract from the busy day — but what if you need the relief of the Puppy Bowl on a day that isn't the day of the Super Bowl? Luckily, you can rewatch the 2019 Puppy Bowl on the same platforms it airs on, so if you need a little dog energy on demand, you won't have to look far.

Animal Planet has a few versions of past Puppy Bowls available for streaming, mainly from 2018's Puppy Bowl XIV, but access to those clips requires a cable login with a subscription that already carries Animal Planet. If you're looking for some Puppy Bowl content but don't have a traditional cable, try searching any live television streaming services you do have and see if they have previous Puppy Bowl airings available on demand. Hulu Live, for example, has Puppy Bowl footage available on demand and already has a page up for future Puppy Bowl XV content to be available for streaming once it goes live. Be warned, however, that this seems to only be accessible to subscribers with Hulu Live and not for Hulu subscribers that don't have the Hulu Live add-on.

A viewer's best bet when it comes to wanting to re-watch the Puppy Bowl is to drop a view dollars and purchase the previous specials for a couple bucks. The Google Play Store, the Apple Store, and Amazon Prime Video all allow viewers to purchase previous editions of the Puppy Bowl, extending all the way back to Puppy Bowl X. Every service offers some additional Bowl-related programming connected to some of the proper Bowls, including five episodes of Puppy Bowl XIV content leading up to the game. For people who want still more old Puppy Bowl material to revisit, Amazon also carries Puppy Bowl IX, giving it an edge over other digital store. Tragically, there does not seem to be a way to stream Puppy Bowls I through VIII, meaning enthusiasts will have to hunt down DVDs of the television specials.

While there is no Puppy Bowl XV material available yet available for digital purchase, it seems almost certain that XV will follow in the footsteps of Puppy Bowl past and be available for purchase, alongside the Bowl's pre-game special and other Bowl-related material, on all major digital streaming stores. Whether you're able to watch it live and record it on cable, hoping to catch it later through a watch-on-demand service included with your live TV subscription, or planning on re-watching Puppy Bowl XV over and over again through your digital storefront of choice, there are plenty of ways that audiences can get their Puppy Bowl XV fix every day of the year.