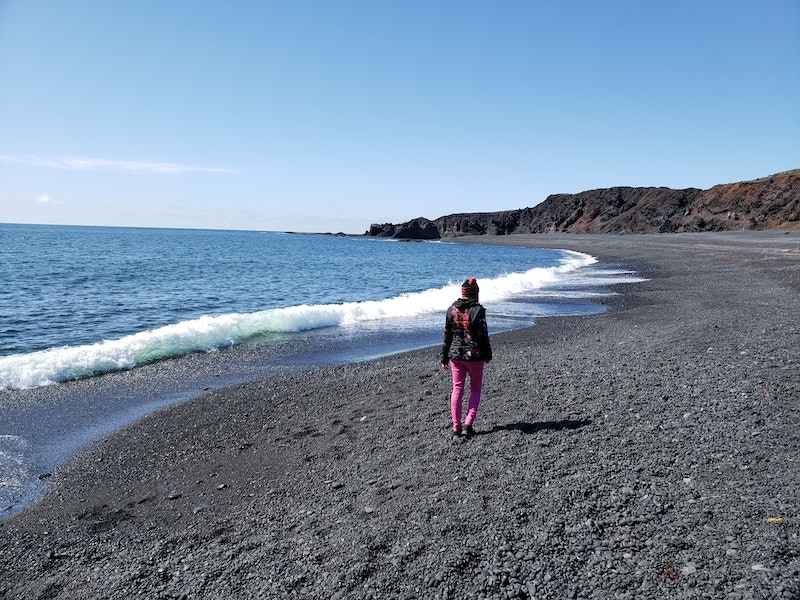 The temperature of the beach water felt like a lukewarm hot tub around my feet, far warmer than the 50-degree Fahrenheit temperature permeating the air around me. It was a comforting feeling; I never wanted to leave. Unlike many beaches in Iceland — or anywhere — where the water is freezing, this one in particular was different: it’s a geothermal one in Reykjavík, Iceland called Nauthólsvík. Here, hot water ranging from 55 to 66 degrees Fahrenheit is pumped into the beach, and entrance is free during the summer. Yep, F-R-E-E. “You can have a good day there and not pay anything,” my new Icelandic friend Inga had told me before I left L.A. Considering that Iceland's world-renowned Blue Lagoon starts at 48 Euros (about $55) per person, I was definitely interested in trying out Inga’s lower-budget suggestion — especially since I was on a quest to see Iceland on a budget.

I know. When you think about Iceland, “low-budget” is probably not one of the things that comes to mind. The country is not cheap — so not cheap, in fact, that it was recently ranked as the most expensive country in Europe. But, when you book a flight to Europe through Icelandair, you have the option of taking a “stopover” in Iceland for up to seven nights before going on to your final destination (or, on the way back from your European destination to your U.S./Canadian one), which makes the country accessible to travelers who may not have thought about visiting it before. This way, you can explore Iceland in addition to whatever European destination you have booked a ticket to — it’s like seeing two countries for the price of one. In June 2019, the airline offered to let me try out the stopover option, coupled with their new Icelandair’s Buddy Hotline program, which offers travelers insider advice from a local. Since I’m a solo low-budget traveler, I decided this be a perfect way to see if I could do Iceland on a budget, especially while the Buddy service is still available — it's only running between now and July 8.

Once I had my Iceland travel dates in place for early June, I connected with my Buddy, Inga, who Icelandair referred me to. As part of the program, one can either do a phone call or chat via Facebook Messenger — but personally, I thought a phone call would be more interactive. Since the Buddy is an Icelandair staff member and a local, they know the ins and outs of Iceland — and you can call or message the Buddy service as many times as you’d like before and during your visit.

Getting advice from a local when traveling is invaluable. According to a March 2019 survey by Icelandair, of which 2,000 respondents were from the U.S., more than two-thirds (69 percent) of Americans want advice and tips from locals. This includes everything from eating like a local (36 percent answered this) to traveling sustainably by shopping locally (43 percent said this). Plus, 82 percent said they trust reviews considerably less these days — so, getting a local’s perspective can help alleviate any anxiety a traveler has about what to do on their trip.

Although I could have asked my Buddy anything — like what types of adventure sports to do in Iceland — I chose to focus on low-budget ideas, as that was my Iceland goal. Inga and I spoke for over an hour and talking to her was fun and easy: it was like speaking to a tour guide with the casualness of a friend. She gave me ideas for things I had to do in three-and-a-half days and things I could miss. I’d been to Iceland once before — but in winter, when it was around 20 degrees Fahrenheit. This time, I would be visiting in the summer, when it would be around 50 degrees Fahrenheit — so this meant there’d be opportunities to do activities that weren’t feasible then, such as renting a car (last time, I hadn’t wanted to drive in snow and ice). Plus, I’d mainly spent time in Southern Iceland, so Inga suggested I see a new part of the country — the Western region, which would have fewer tourists than the South — as well as more of Reykjavík, the capital. By the time we hung up, I felt stress-free and confident that I’d maximize my time in Iceland — all while saving money, too.

First, I flew Alaska Airlines (who’s partnered with Icelandair) from L.A. to Seattle. After a quick layover in Seattle, I boarded my seven-hour flight from Seattle to Keflavík Airport near Reykjavík, Iceland. This flight was comfortable to say the least — spacious seats, plenty of leg room (I’m 5’9”), and the flight felt quick. For travelers, Icelandair offers a few different classes of service — three types of economy classes (Economy Light, Standard, or Flex) and two types of their first class equivalent, Saga class (Saga Premium or Saga Premium Flex). If you want to splurge, you may want to consider Saga Class — it includes perks such as more comfortable seats, two checked bags versus one, and the ability to make flight changes without a change fee.