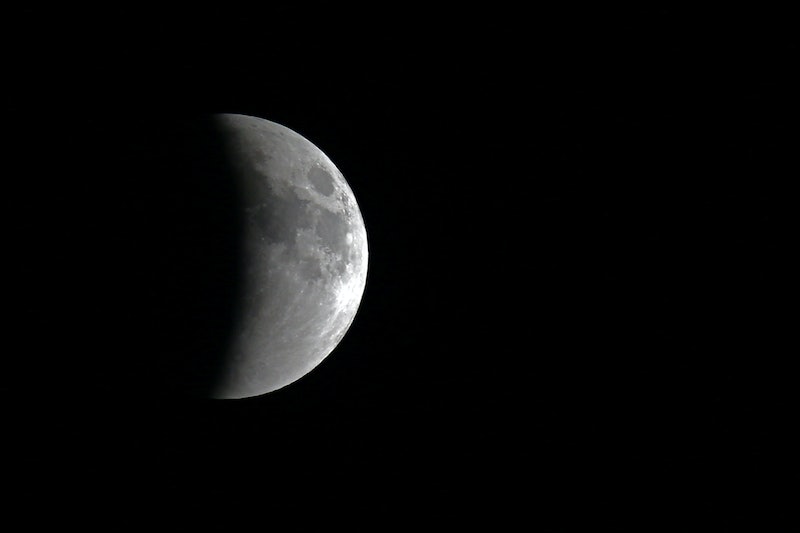 Get ready to start working for the weekend, because on Friday, Feb. 10, three simultaneous celestial events will make for some exciting stargazing. What's more, you don't need a telescope to enjoy the show — astronomy buffs wondering how to see the Snow Moon, lunar eclipse, and Comet 45P will be happy to learn that you can get the best view by following just a few simple steps.

The February's full moon will be the second of 2017, hitting its peak at 7:33 p.m. EST. Also known as the Snow Moon or Hunger Moon, this bright lunar event often coincides with some of the year's most brutal weather. The unique monikers given to February's full moon by North Eastern Native American tribes were symbolic of the heavy snowfalls, and food shortages that often plagued the month.

The penumbral eclipse that coincides with the full moon, however, will we be a touch more difficult to detect. As Bustle's Megan Grant noted during the last penumbral lunar eclipse, which occurred in September of 2016, there are three types of eclipses — partial, total, and penumbral — with "penumbra" referring to a specific part of the shadow at play here. "In the case of the penumbral lunar eclipse," wrote Grant, "the Earth blocks some of the sunlight and stops it from hitting the moon. As a result, the Earth covers part of the moon with its penumbra."

And if all that isn't enough to get you pumped for Friday, Comet 45P, which has been visible with use of a telescope or binoculars for the past two months, will be incredibly close to reaching its closest point to Earth. Also known as the New Year Comet, it will be about 7.4 million miles away from Earth on Feb. 11 — so even though it won't be quite there on Feb. 10, it'll still be pretty close at the time of the Snow Moon and the penumbral lunar eclipse. This ball of water, dust, and ice only comes around every five and a quarter years, so this alignment is extra special.

Just one of these special phenomenons would be thrilling, but all three at the same time must mean something, right? So, here are a few key pointers as to how to view the Snow Moon, penumbral lunar eclipse, and New Year Comet this weekend:

More like this
The Summer Solstice Spiritual Meaning, Explained
By Jessica Booth and Brittany Beringer
13 Summer Solstice Quotes To Celebrate The Longest Day Of The Year
By Sadie Trombetta
The 15 Best Dresses For Hot Weather
By Andrea Gale Boerem
American Girl Doll Memes Are Going Viral On Instagram & Tiktok
By Emma Carey
Get Even More From Bustle — Sign Up For The Newsletter