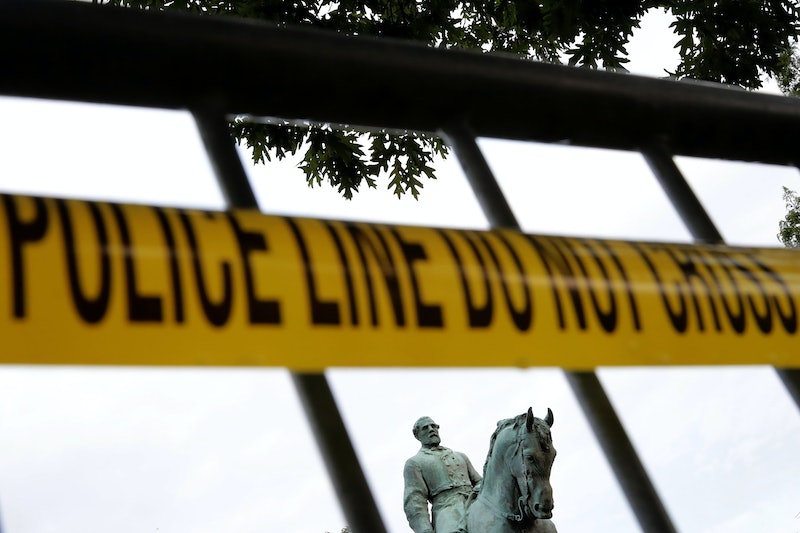 On Saturday, a car was purposely driven into a crowd of people protesting the racist, White Supremacist-led "Unite the Right" rally in Charlottesville, VA. At least 19 were injured in the crash, one woman died, and a state of emergency was declared following the chaos. On top of the deadly car strike, several skirmishes erupted throughout the day, and two state police officers died in a helicopter crash that night. In light of recent events, staying safe at a protest is an important concern for those who want to publicly exercise their right to free speech, and fight back against the hatred being spewed by Alt-right groups. There's no way to predict the future, but by preparing ahead of time and staying aware of your surroundings, it's possible to reduce the level of risk associated with protests and rallies.

Between Saturday's violence and the numerous terrorist incidents that have taken place in 2017 alone, it's natural to be concerned about safety during a protest — especially while one is attempting to carry out free speech, and fight back against hatred, bigotry, and racism. While demonstrations always carry some risks, there are ways to prepare, whether you're a first-timer or a seasoned protester.

More like this
Watch Jacinda Arden’s Devastatingly Honest Resignation Speech
By Sam Ramsden
Here’s Where The NHS Nurses’ Strike Currently Stands
By Sophie McEvoy
5 Striking Parallels Between Princess Diana & Prince Harry’s TV Interviews
By Catharina Cheung
These Artists Are Reimagining Black History Month To Create A Better Future
By Katie Mitchell
Get Even More From Bustle — Sign Up For The Newsletter
From hair trends to relationship advice, our daily newsletter has everything you need to sound like a person who’s on TikTok, even if you aren’t.