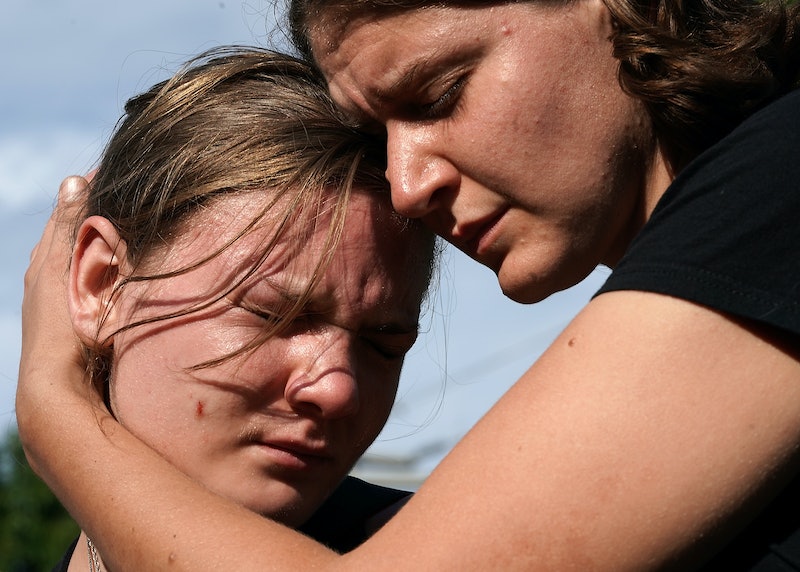 A car intentionally drove into a crowd of pedestrians and left more than two dozen people injured. Three people are dead. Charlottesville, Va., is in a state of emergency. Over the weekend, clashes between white supremacists and counter protestors erupted in violence ahead of a scheduled "Unite the Right" rally Saturday. To help the victims in Charlottesville, people have already begun collecting donations, organizing vigils, and raising awareness about the consequences of tolerating hate groups.

After seeing the weekend's events unfold, throngs of people are reaching out on social media and asking what they can do to help victims in Charlottesville. If you're one of them, there are things you can do: Places you can donate to help cover the cost of victims' medical expenses, vigils being set up in towns and cities across the country that you can attend and promote, places to donate to help strengthen the resistance, calls to be made to your representatives, and more.

What happened today is beneath any civilized nation, and President Trump's refusal to denounce the white supremacists that incited violence in Charlottesville sends a dangerous message. The Los Angeles Times reported that President Trump remarked on the “terrible events” and condemned “in the strongest possible terms, this egregious display of hatred, bigotry and violence, on many sides, on many sides."

However, there can only be bigotry on one side. There is only one side.

If you're mad AF, and you want to help, here's what you can to for the people of Charlottesville right now.

A GoFundMe campaign, started by Democratic Socialists of America member Michael Patterson of Anchorage, Ala., asked for donations for those injured in Charlottesville. The campaign has raised almost $30,000 in just a few hours. If you want to help, donate to help cover the costs of Charlottesville victims' medical expenses.

Another GoFundMe campaign, spearheaded by a group called Unity C-ville, is raising funds to contribute toward medical expenses of those who were injured in Charlottesville Aug. 12. You can donate directly on its GoFundMe page.

Vigils have already begun popping up across the country to support the victims in Charlottesville, and to stand in solidarity against white supremacy and hate. Many vigils for Charlottesville are happening this week, with more scheduled in the days to come. Search Facebook events and this map by Indivisible to find the vigil closest to you, and show your support in person if you can.

If you're feeling helpless, one thing you can always do is donate blood if you qualify. The Red Cross needs blood donors every day, no matter what's going on, and donating blood can help save someone's life.

5. Start A Dialogue In Your Community

If your parents voted for Trump, or you have family or friends who are Trump supporters, or who condone what happened in Charlottesville, it can be difficult to feel compassion for them. I'm in the same boat; I have family members I no longer speak to since the election.

If you do want to have a conversation with family or friends, Showing Up For Racial Justice has an entire website dedicated to political education. You can use the materials to host political education session with your family, or in your community, or just get some ideas about how to start a dialogue with others who don't understand why what happened in Charlottesville is dangerous.

If your representatives aren't condemning the violence in Charlottesville, and they aren't rejecting white supremacy, call them. Tell them they should be. The website Call Your Rep will let you know who your reps are if you aren't sure. You can also create call scripts so you know exactly what you'll say.

As long as racism, homophobia, and sexism persists in America, your help is needed to defeat it. Myriad organizations are working every day to defend and protect the rights of people of color, the LGBTQIA community, and women's rights. Donate to help make a positive difference.