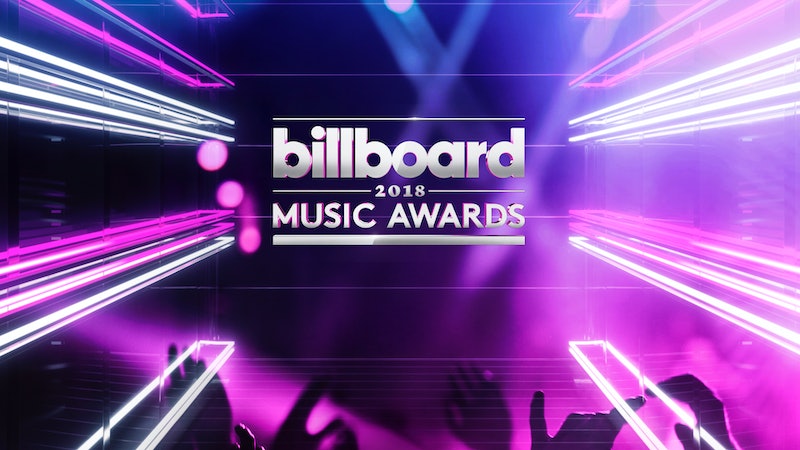 It seems like just yesterday Drake was on stage at T-Mobile Arena in Las Vegas with his purple pantsuit-donning father, accepting his record-breaking 13 Billboard Music Awards for More Life. But alas, a whole year has gone by, which means a year's worth of new music is up for being awarded the shiny gold microphone that is a Billboard Music Award. Some of the top nominated artists this year include Ed Sheeran for his album Divide, Kendrick Lamar for his Pulitzer Prize-winning album DAMN, and Cardi B for her hit bop "Bodak Yellow (Money Moves)" and her collab with Bruno Mars, "Finesse." Needless to say, there are sure to be some performances, award presentations, and acceptance speeches you won't want to miss, so make sure you know how to live stream the Billboard Music Awards before they air at 8 p.m. EDT on Sunday, May 20.

The show will be hosted by The Voice judge and pop music sensation Kelly Clarkson, who announced in a Billboard press release that she is preparing a full presentation for her act. "I already have 20 costume changes planned," Clarkson said. "I will be flying in like my girl P!nk, and calling Amy Schumer and Sarah Silverman for jokes. Well, or I’m just gonna show up and celebrate my favorite artists and get to know a few more. Yeah, maybe I’ll go with that plan."

To see it all happen live, P!nk-inspired entrance or not, you can do one of a few things. According to Billboard, this is the first year the BBMAs will be broadcasted by NBC. (ABC has broadcasted it in previous years.) The easiest way to live stream the award show is to use cable provider credentials to log onto either NBC's website or mobile app (for use on phone, tablet, or other streaming devices like Roku). This does require you to subscribe to a major cable provider and have access to the applicable login information.

You can also subscribe to a streaming provider to watch the awards. NBC live streaming is available on Hulu Live ($39.99 per month), YouTube TV ($40 per month), DirectTV Now ($35 per month), PlayStation Vue ($39.99 per month), and Sling TV ($20 per month). If you're on a budget but you refuse to miss seeing JLo perform or Janet Jackson receiving the Icon Award, you can sign up for a free trial to any of these streaming services. Just be sure to pay attention to the fine print and set a reminder on your phone to cancel your subscription before the trial's up so you're bank account isn't charged unexpectedly.

What's an award show without red carpet coverage? To make things a little trickier, if you want to watch 2018's biggest stars in music strut down the red carpet and drool over what (or who) they're wearing, you'll need to head over to E! News' website to live stream it. Or, if you can subscribe to one of the aforementioned streaming services, E! is available on all but one. If you're a Sling TV member, you'll need to purchase an additional "Lifestyle Extras" channels bundle for $5 to have access to E! and the pre-show special, "Live From the Red Carpet." E! has yet to release a start time for the show.

If none of these streaming options will work for you, thanks to social media, you can almost see the show without watching it live. As it is during all major award shows, Twitter will be flooded with updates using the hashtag #BBMAs and others. Be sure to follow the official Twitter account of the awards and E! News to receive timely and accurate updates directly from the source.

More like this
An Ultimate Guide To The Music Of 'Rap Sh!t'
By Brad Witter
All The Celebrity Relatives Revealed On 'Claim To Fame' So Far
By Brad Witter
‘Stranger Things’ Stan Megan Thee Stallion Grilled Natalia Dyer About Nancy & Steve
By Brad Witter
Ekin-Su & Davide’s Next Move Is Confirmed & Involves *A Lot* Of Travel
By El Hunt
Get Even More From Bustle — Sign Up For The Newsletter