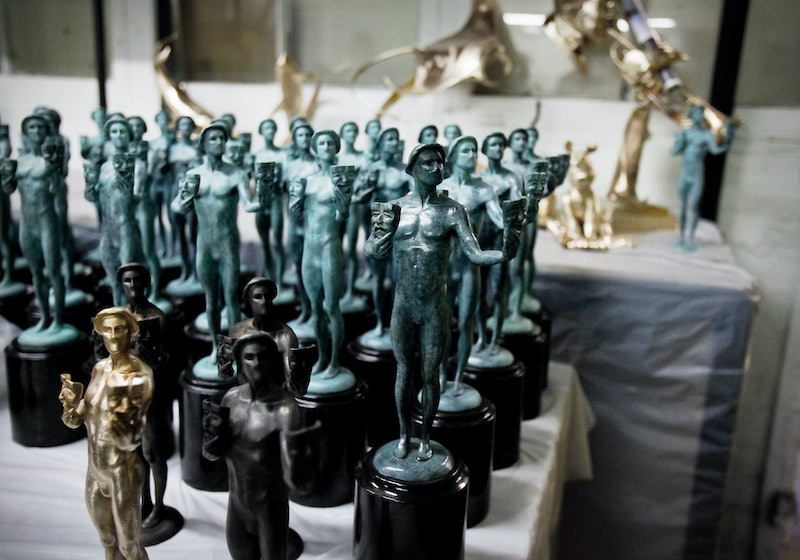 It's awards season, and that means that good movies are finally back in the theaters, Time's Up and #MeToo are getting the massive platforms they deserve, and all of Hollywood's biggest stars are regularly convening in the same place to drink and socialize and give amazing speeches. Oh, and win awards of course. But while everyone watches the Golden Globes and The Oscars, people seem to forget to tune into the Screen Actors Guild Awards, which are airing on Jan. 21 this year. But that's a mistake, especially since this year, Kristen Bell will be hosting. And let's face it, we all know millennials are killing cable, so chances are you won't be watching on the networks. So is it possible to stream the 2018 SAG Awards?

Unfortunately, it looks like there won't be any way to watch the awards without a cable subscription. The show will air simultaneously on both TBS and TNT on Sunday, Jan. 21, at 8 p.m. ET, but if you want to watch on your computer or the TBS or TNT apps, you'll need a cable login to do so. So time to make up with whoever's login you borrow for whatever fight you had last week and ask for that cable login.

It's surprising that the networks decided not to stream this year's awards for free, considering this year represents big changes for the show. The SAG Awards will have a host for the first time in the show's history, and they couldn't have picked someone more suited to the task than The Good Place star Kristen Bell. "I am honored to be part of the SAG Awards, and am a little nervous about being its first-ever host," Bell said during the announcement, per The Chicago Tribune. "I'm so glad that I'll be in the company of my fellow actors, many of whom I've worked with before, so I know they'll be warm and supportive. It's going to be an amazing night."

In keeping with the push to elevate the #MeToo and Time's Up movements on the incredible platforms that awards shows provide, Bell shared with People that this year's SAG awards will be focused on representing women. “There will still be men there obviously, but there will be a much better balance,” Bell says in the interview. “And I think that’s in direct response to these winds of change that are happening where women are having a moment [and] a lot of them who haven’t had a voice are finding their voice.” This means that viewers should expect to see a lot more women gracing the stage than usual. The Los Angeles Times reports that at the casting of the SAG statuettes, Screen Actors Guild Awards committee member Elizabeth McLaughlin shared that there would only be female presenters at this year's awards. Men will only grace the stage to introduce clips from nominated films and to accept awards.

Bell is particularly excited to be hosting the show during a period of such sweeping change, both in Hollywood and in industries throughout the nation where sexual harassment and assault are all too common. In an interview with E!, Bell shared:

"Weirdly, I think that's why I'm proud to not just be a part of it but to be hosting the awards at this particular moment, because I am a person that permanently believes in hope!" Bell exclaimed. "Even in the darkest moments I've ever had—and I've had some dark ones—there's something in my bones that believes in hope. And I think the message of moving forward—and yeah, nobody knows exactly how to do it, and people are going to watch every awards show and every movie and every TV show on the planet and say, 'well, that person did this wrong.' Yes, but a lot of these things are subjective. What we're talking about is, we might not all do it right in the beginning, but we do want to do it together, and I'm here for you."

Though E! reported that viewers shouldn't necessarily expect to see a repeat of the all-black red carpet attire that made such a statement at the Golden Globes, the SAG Awards are sure to be full of powerful women speaking out about ending sexual abuse and harassment (sans Oprah this time, unfortunately). The bar was set so high by the Globes that many are left wondering what Time's Up could have planned for the SAG Awards, or the Oscars. But whatever those plans may be, we can be sure that actors and activists reportedly attending this year's SAG Awards, such as Reese Witherspoon, Lupita Nyong'o, Tracee Ellis Ross, and Michelle Williams, will make sure the message of Time's Up doesn't get lost in the excitement over the awards themselves.

So if you can, beg someone to lend you their cable log in, or crash in front of your neighbor's TV for the night— it seems like this year's SAG Awards are going to be a night not to be missed.