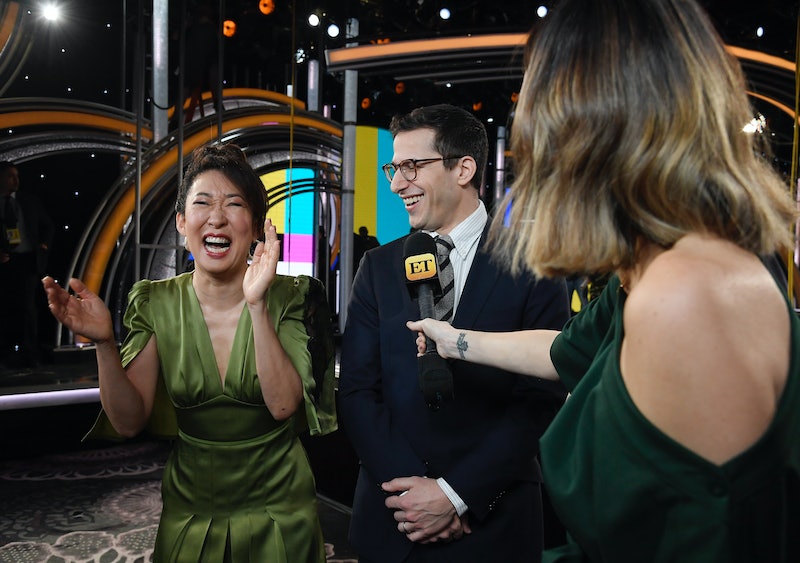 The Golden Globes return for another year on Sunday, Jan. 6, and thanks to co-hosts Andy Samberg and Sandra Oh, it's shaping up to be one of award season's most entertaining shows. So, fans without cable will want to spend some time discerning how to stream the 2019 Golden Globe ceremony. If there was ever a year to miss, it's definitely not this one.

Compared to buttoned-up affairs like the Oscars or Emmys, the Globes are generally a more relaxed, playful review of the previous year's best film and television. That laidback vibe — plus sometimes unpredictable winners and a steady stream of alcohol for the audience — means just about anything could happen, and you won't want to be the only one playing catch-up later.

Luckily, NBC has made it easier than ever to watch the ceremony. According to NBC News, the Globes will be airing on NBC (which can be streamed via platforms like Sling TV and Hulu Live), but will also be available to stream on the NBC website and the NBC app (with a cable login), as well as the NBC Facebook page. So don't stress — there are plenty of ways to stream the show this year, just as there are plenty of reasons to dedicate a Sunday evening to staying in and watching some of 2018's greatest art get recognized.

A Golden Globe award is prestigious and recognizable enough that the term "Golden Globe winner" can command a lot of respect, but the ceremony itself tends to be relatively light and frivolous. In the past, hosts and presenters have had a lot of leeway to say and do what they want — for better or for worse — resulting in serious awards being handed out in a less-than-serious manner. The unpretentious presentation usually makes for a fun viewing experience for everyone, including those who aren't necessarily interested in some of the show's more minor awards. The Globes are almost always a good time — at least when a host isn't delivering transphobic and misogynistic "jokes" — and that sense of fun can only be amplified by the promise of two major A-listers at the helm.

It's no surprise that Saturday Night Live alum Andy Samberg, a Golden Globe winner himself for Best Actor In a Television Series Musical or Comedy for Brooklyn Nine-Nine, has an impressive comedic pedigree, nor is it surprising that Sandra Oh, a former Golden Globe winner for Best Supporting Actress In a Series, Miniseries or Television Film for Grey's Anatomy, has a talent for delivering just about any line of dialogue ever written. What may have been surprising, however, was just how much chemistry they showed audiences while co-presenting an award at the 2017 Emmys. The fact that these two are getting a whole hours-long ceremony to play off of each other is reason enough that the Golden Globes are worth tuning in for, no matter how you're watching.

More like this
Here’s How Long You Can Expect The 2022 Emmys To Run
By Grace Wehniainen
What’s New On Netflix: Meet 'The Real Bling Ring'
By Arya Roshanian
Jinkx Monsoon Is About To Get Real Sketchy
By Sam Ramsden
Kenan Thompson Pointed Out A Super True Detail About 'Friends' In His Emmys Monologue
By Grace Wehniainen
Get Even More From Bustle — Sign Up For The Newsletter