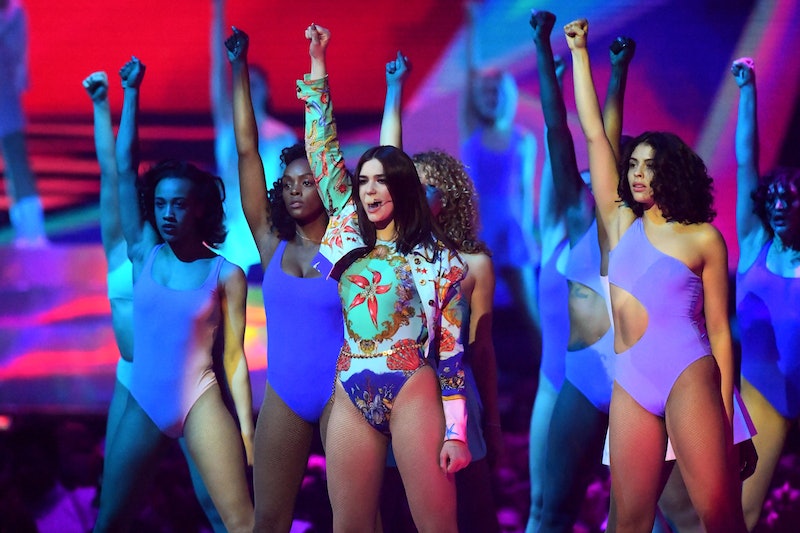 The 39th edition of the British Phonographic Industry's pop music awards, better known as the Brits, will be taking place at The O2 Arena in London this week. As the star-studded lineup of performers and nominees continues to grow, so does the anticipation of fans, many of whom can't wait to see their favourite artists take home a prestigious Brit Awards statue. As in previous years, the show will be broadcast live on television, but there are other ways to enjoy the ceremony — so here's how to stream the Brits 2019.

As reported by The Sun, the Brit Awards 2019 will be broadcast live on Wednesday Feb. 20 at 8.00 p.m. on ITV1. Don't worry if you end up missing this years ceremony, because the extravaganza will be uploaded on the channel's catch-up service, the ITV Hub, shortly after airing. Those who prefer to stream the show elsewhere are also in luck, because according to the Brit Awards official website, the entire ceremony will be streamed live on their official YouTube channel.

Due to this years impressive lineup of performers, you really won't want to miss out on a second of action, and those expected to take to the Brits stage include Calvin Harris, Sam Smith, The 1975, Little Mix, Dua Lipa, Jess Glynne and many more, reports the Mirror.

Another famous face viewers can expect to see during the 2019 broadcast is returning host, Jack Whitehall. The British actor and comedian is taking on the role once again after a successful hosting debut at last year's ceremony. According to the Brit Awards website, when speaking about being invited back as host, he said:

"I am excited to be invited back to host The BRITs for a second time, I had a great time at this year’s ceremony and look forward to another exceptional night of music and entertainment."

And Brit Awards Chairman, Jason Iley, who is also the CEO of Sony Music UK and Ireland, has also expressed his delight at Whitehall's return. He said "Jack was one of the best BRITs hosts the show has seen for many years — I’m delighted he has decided to do it again next year. He was so funny and very engaging, I can’t wait to see what he will bring to the show in 2019."

According to the Mirror, the A League Of Their Own star isn't afraid of causing a bit of controversy during his live hosting duties, and as reported by the newspaper, he previously revealed "I had a great time at this year's ceremony and look forward to another exceptional night of music and entertainment. Let's see who I can upset this year."

Fans of the annual ceremony will also be treated to a special live performance from the Greatest Showman himself, Hugh Jackman, who is expected to open the show with music from the hit 2017 movie. As reported by Heart FM, Jackman revealed the thrilling news on his Twitter account, whilst also revealing that fans will have another chance to watch him perform live on his sold out UK tour. The 2019 ceremony sounds like its going to exceed all expectations, and I for one cannot wait.