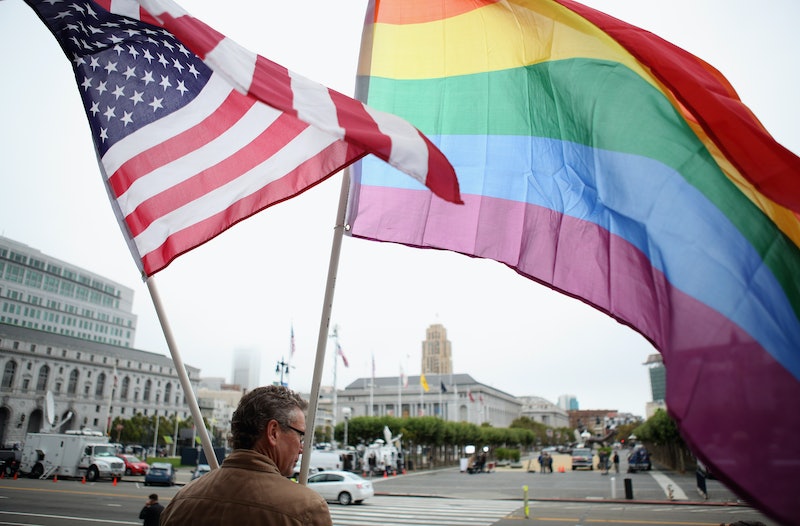 When it comes to politics, LGBTQ Americans are vastly underrepresented. While they make up nearly five percent of the United States' population, LGBTQ individuals only hold a tenth of a percent of all of its elected offices, according to the LGBTQ Victory Institute. To help address this representation gap, advocates created National Out to Win Day to encourage LGBTQ Americans to run for office. If you want to know more about how to support LGBTQ politicians on Out to Win Day and beyond, the list below can serve as your guide.

Out to Win Day is being sponsored by the LGBTQ Victory Institute, along with 18 other partners, Watermark Media reported. The organization emphasized that that there needs to be significantly more LGBTQ individuals elected to office in order to close the representation gap. “America needs to elect 22,272 more LGBTQ people to achieve equitable representation,” the LGBTQ Victory Institute said in a statement, per Watermark Media.

The president and CEO of the organization, Annise Parker, also emphasized that it's especially imperative to directly reach out to LGBTQ Americans interested in running for office, both on Out to Win Day and always. "Many barriers to entry exist for LGBTQ people considering a run for office, but among the most significant is that we need to be asked more times than white straight cisgender men before we give it serious consideration,” Parker said to Watermark Media.

On this day of advocacy, there are many steps you can take to help further equal representation and ensure that it's a priority. These tips will help you take action now to address this important issue.