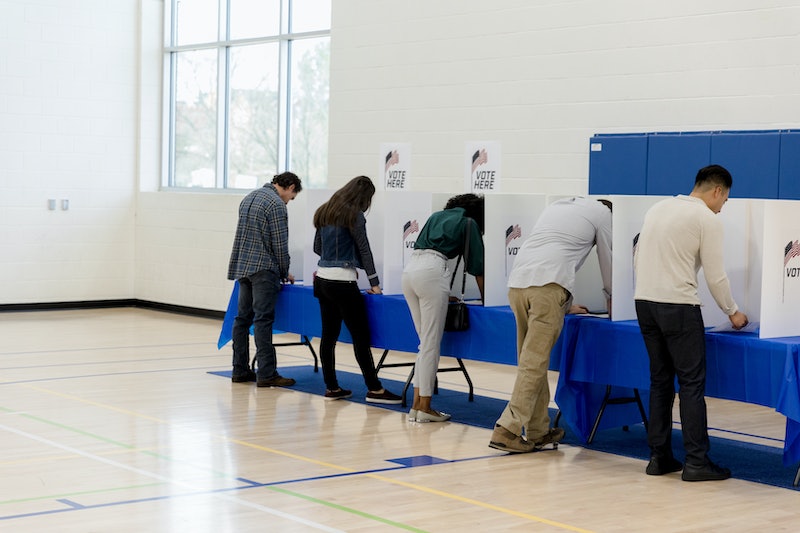 The 2018 elections made history with the highest midterm voter turnout in four decades. Voters elected the most women to Congress and also created the most diverse Congress in history. These "blue and rainbow waves" were attributed in part to President Trump's divisive policies targeting immigrants, LGBTQ people, and other marginalized groups.

Now, the 2020 election is less than 10 months away. Though that might seem like a long time, it isn't; the first two events to determine the democratic nominee, the Iowa caucuses and New Hampshire primary, take place in February. And despite the historic turnout in the 2018 midterms, many people are still disillusioned with voting or face barriers that make it difficult. So if you want to take action before the 2020 election, now is the time to start.

"Not voting is just going to keep giving more power to those who have been systematically silencing you," Jamie Margolin, co-founder of youth climate activism organization Zero Hour, tells Bustle. But voting is just one thing you can do as a concerned citizen. Voting is "not the only solution, but it's one of the many important solutions," she says.

With those solutions in mind, we spoke to activists about how you can help voter turnout reach a historic high in 2020. Below, find one action you can take each month leading up to the 2020 presidential election.

February: Find Local Groups In Your Community And Sign Up For Their Newsletters Or Listservs

Sylvia Albert, national director of voting and elections at grassroots organization Common Cause, tells Bustle that people should start by getting informed. "Look around your community and see what groups are doing the work," she says. Find out what groups are working to maximize voter turnout in your area and join their mailing lists. Those groups will let you know if there's an upcoming board of elections meeting, where officials may talk about closing certain polling locations, for example.

If you aren't registered to vote, you should definitely do that, which you can do online in 38 states and Washington D.C. In other states, you might have to register by mail. In 21 states and D.C., you can register on the same day you vote, though in North Carolina you can only do this during early voting.

Even if you are already registered, Alejandra Y. Castillo, CEO of the nonprofit women's advocacy organization YWCA, tells Bustle that you should double check your registration to make sure it's still valid.

In 2008, then-Georgia Secretary of State Brian Kemp enacted a policy called "exact match," which requires that someone's voter information perfectly match their state driver's license or social security records. If there's a typo or their registration reads "Tom" instead of "Thomas," the voter's registration is put on hold until it's corrected. In 2018, Kemp, who was running for governor, enforced the policy, placing 53,000 voter registrations on hold and purging 313,000 "inactive" voters from its rolls.

"If you believe you are registered and it's been a while since you were last at the polling booth, it's important to check that you're still registered," Castillo says. You should also make sure your name and address are accurate and match your identifying documents.

If possible, you should check this information ASAP, before the primaries. Some states have primary registration deadlines as early as February. Check yours here.

April: Fill Out The Census

For the first time in history, the U.S. Census is mostly digitized, meaning you will likely have to fill it out online. Castillo points out that the census data determines the number of seats each state has in the U.S. House of Representatives and the amount of federal funding local communities receive. If the number of kids who need reduced or free school lunches are undercounted, for example, "then your community does not receive the requisite dollars that it needs," Castillo says. The 2020 Census data will determine funding and apportionment in the House for the next 10 years, so when people are under- or uncounted, "communities get shortchanged in the money as well as the political representation for the next decade."

Here's information on how to fill out the 2020 Census.

May: Engage People On Social Media

Margolin tells Bustle that people who are active on social media can film and share a video of themselves once each month talking about why they're voting and why it matters. Then you can include a link where people can register to vote. "You just post something like that every month that keeps reminding people who follow you on social media," Margolin says. Posting more than once will help people understand that what you're saying is important, but posting only once a month will keep it from being spam-y.

June: Make Sure Your Friends Are Registered To Vote

Brianna Cayo Cotter, senior vice president of Social Impact at MTV, which has started a voter registration campaign called +1theVote, tells Bustle that making sure your friends are registered to vote is an easy way to have a big impact on the upcoming election. She notes that research shows that the more social pressure millennials feel to vote, the more likely they are to actually vote. She suggests that friends go to the polls or fill out their absentee ballots together. "The more that people can either organize or participate in things that make voting more fun and more social, will have a really big impact on turnout," she says.

Rock the Vote President Carolyn DeWitt also notes that there are elections happening at the presidential, federal, state, and local levels in addition to ballot measures and propositions in 2020. "It’s important that voters show up every time and that they educate themselves on all races and issues so they can weigh in and have a voice," she says. "Power is built from the bottom up, which means we need to make sure those we are electing at every level of government reflect our values."

Albert says that people who want to get involved in ensuring fair elections can sign up to volunteer with Election Protection, which needs lawyers to answer questions via the nonpartisan voter hotline, 866-OUR-VOTE. If you're not a lawyer, you can still volunteer with Election Protection through its nonpartisan poll monitoring program. "Volunteers commit to taking at least one Election Day shift to stand outside of assigned polling location after receiving training," Election Protection's website states. "You will distribute 'Know Your Rights' cards to voters, answer basic questions from voters at the polls, and help voters resolve any problems that occur, with the help of trained legal professionals."

Host a local voter registration drive. Here's a step-by-step guide from Rock the Vote on how to do it.

The latest report by the Election Administration Commission said that 70% of election officials said it was difficult or very difficult to find poll workers, who set up your polling place and organize voters. "Poll workers have the best of intentions, but if there are not enough of them and they haven't been trained properly and they're older and there are new machines, all these things can snowball, and it can lead to disenfranchisement," Albert says. "Being a poll worker would be an amazing gift that you would give your entire community."

All poll workers have to be paid, though the rates vary by state. In some states you can also become a poll worker at 16, while other states require all applicants be at least 18 years old.

Margolin recommends getting together with your friends and family and creating a voting plan. You can plan out when someone needs to be picked up from school or work to make sure that you all have a way to get to the polls. If you have family members who don't drive, offer to drive them. "Actually have a game plan so people will actually vote," Margolin says.

More like this
10 Thanksgiving Alternatives You Can Celebrate This Month
By Katie Mitchell
Footballer Jake Daniels Shared His Thoughts On A World Cup Boycott
By Sam Ramsden
Iran Has Issued A Death Sentence Over Mahsa Amini Protests
By Catharina Cheung, Darshita Goyal and Maxine Harrison
Joe Lycett Just Took HIs David Beckham Qatar Protest To A Whole New Level
By Sophie McEvoy
Get Even More From Bustle — Sign Up For The Newsletter