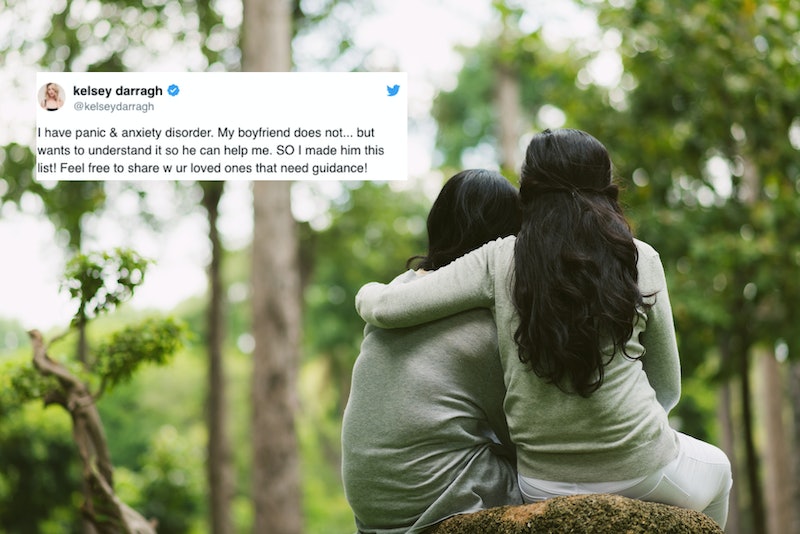 DragonImages/Fotolia
By Ayana Lage
May 18, 2018

Panic attacks can be terrifying — not only for the person experiencing them, but also for the people trying to help. Depending on someone's panic disorder symptoms, they may be hyperventilating, feeling as if they're going to die, having trouble swallowing and so much more. I have had panic attacks for 14 years, and I'll never get used to how disorienting they are. Unfortunately, I've had experiences with people who wanted to help me calm down but made me more anxious in the process. So how do you take care of someone having a panic attack? A viral tweet explains one woman's solution, and it's extremely helpful.

Comedian and podcaster Kelsey Darragh shared a tweet on Friday May 11 with a picture of a list she'd made for her boyfriend, who she says does not share her panic disorder. The list has 15 actionable tips for helping someone cope with a panic attack from someone who experiences them, and they're all things that are super relatable for anyone who deals with panic disorder or has had a panic attack. And it also has some tips about what not to do, too. Even if your instinct is to tell someone to calm down when they're having a panic attack — after all, you're pretty much the opposite of calm when you're panicking — it's a piece of advice that may cause your friend to become even more anxious. Instead, bookmark Darragh's list and learn from it.

Since Darragh posted the list, it's gone viral, with nearly 25,000 likes and 10,000 comments. Darragh also followed the list up by inviting folks to tweet their tips, too, and the replies section has plenty of other helpful suggestions for how to help a friend who's going through a panic attack.

Even if you don't think you know anyone with panic disorder, this is still important information. According to Healthline, about 10 percent of people deal with panic attacks on an occasional basis, so there's a good chance that someone you know has experienced one. They may not have panic disorder, but you don't need a diagnosis to have a panic attack. It's also extremely hard to ask for help in the middle of a panic attack, especially if you aren't sure how the people around you will react. I'd much rather go through it alone than risk someone saying something insensitive that makes it all feel significantly worse.

Some of Darragh's advice is stuff I hadn't thought of, and I've been in therapy for my anxiety for five years. No solution is one-size-fits-all, especially for mental health, but these tips are useful for anyone who wants to become better at understanding panic attack symptoms and how to mitigate their effects. For example, she emphasizes not forcing an anxious person to do anything. Instead, you can make gentle suggestions about activities that could provide a useful distraction. Other suggestions she makes are practicing empathy, doing breathing exercises together, and getting your friend to a safe space — home, if possible. You can peep all her suggestions within her tweet. But most importantly, if you aren't sure what to do if your friend is going through a panic attack, just ask them!

Again, these tips may not apply to everyone (I rarely feel nauseous when I'm panicky, so number 6 isn't super relevant for me) but it's advice that may help you when you're around someone who really needs it. As Darragh emphasizes, it's important to be patient and empathetic when you're helping someone through a panic attack. They'll thank you in the long run.