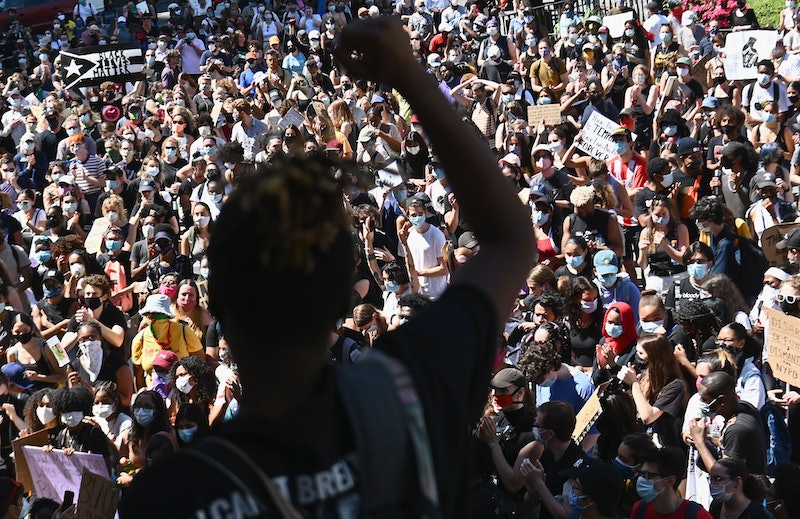 Nothing puts America’s complicated, deep-seated issues with racial inequity and anti-blackness into stark relief like a video of police killing a black man. The country saw it in August 2014 after the killing of Michael Brown in Ferguson, Michigan, and we're seeing it on an even larger scale as all 50 states erupt in protest over Minneapolis police officer Derek Chauvin kneeling on the neck of George Floyd for nearly nine minutes. People are asking: How are we here again? And what can we do?

In addition to donating money, taking to the streets, and posting on social media, one impactful action that white and non-Black people of color can take is having hard conversations about race, racism, and anti-blackness with our family members. Talking about race can be scary and intimidating if you’ve never done it before, but it's one of the best ways to effect change. It also takes the onus of education off of Black Americans. Acknowledging and unpacking your privilege is uncomfortable, but exploring that discomfort and asking questions is where the real work begins.

Jordan Pickell, MCP, RCC, a clinical counselor who focuses on the impacts of trauma, violence, and oppression, tells Bustle that while actively working through our own feelings about these conversations is hard, it's really important.

“So much of anti-racist work starts with our close relationships but, even more that, it starts with ourselves," Pickell says. "We put a lot of pressure on ourselves to say all the things, so we say nothing. It's important to find ways to say something, even if it’s imperfect.”

How you start the conversation and the approach you take is also going to vary based on who you’re talking to. So, let’s take a look at a few important relationships where you could make a difference by bringing up a conversation about race and anti-blackness.

Talking to your parents about systemic racism can be trickier than talking to a peer, because they're used to teaching you things, not the other way around. But thinking can evolve over time, and younger generations can help older generations assimilate newer information.

“There may be a sense with white, liberal parents that ‘it’s so much better than it was,’ so they’re having a hard time seeing the injustice now, when it may look different than it did when they were younger,” Pickell says. “Even though so much of it actually does look the same.”

Your parents might believe that they’ve already done the work they need to do. They may feel like you’re attacking them because — as they taught you — only “bad people” can be “racist.”

While it might feel frustrating to have to constantly affirm things that you feel are obvious, it can help to recognize that your parent is likely coming from a place where they’ve never or rarely had to acknowledge their race or systemic racism. This is a “you catch more flies with honey than vinegar” situation: Your loved ones are the flies and getting a pat on the back is the honey. If your goal is to get through to the people you love, sticking to strident “shoulds” may not be the most effective way to get through to them that what they've done in the past gives them a pass now. (Additionally, Black people should not be expected to hold our hands through these conversations.)

How To Talk To Your Parents Who Make Racist Jokes

If your parents think that it’s “OK” to make racist jokes, as long as no one the comments apply to is present, Pickell suggests setting clear boundaries from the get-go.

So many Americans define “racism” by direct actions taken by bad people, like calling someone the n-word or spitting on Black protestors or wearing KKK hoods and burning crosses. But those are racist actions, not racism. Robin DiAngelo explains in her book White Fragility that racism is a structural and systemic ideology that is woven into the fabric of society. People are socialized into a systemically racist society from birth and, which can lead to taking directly racist actions. But racism shows up in much more subtle ways. Regardless of our intent or our personal perceptions of ourselves, living in a systemically racist society means that racism lives in every single one of us.

Ashley, 34, recently took a long car trip with her dad, who is Argentine-American and a Trump supporter. When she mentioned the protests, her dad responded with comments defending the police. Her immediate response was angry and reactionary but, as they continued to talk, she noticed a shift.

“I think I was able to make my dad understand how unfair police brutality against the Black community was when I said, ‘What George Floyd ‘did,’ Dad, if I did that same exact thing, I wouldn’t be dead.’ That resonated,” Ashley tells Bustle. “I told him, me or Wilson — my white brother — could be drunk in front of cops, use counterfeit money, whatever, and in none of those circumstances would we end up dead at the hands of cops for that. That’s what resonated most with him.”

Pickell says that this an approach she takes in her own life, as a mother speaking to other mothers. She asks: How would you feel if this would your own kid?

“Then it’s not intellectual anymore; it’s something to be linked to their own experience,” Pickell says. “It’s something they can feel in their body.”

Meet people where they’re at and prioritize results over the methods used to get there.

How To Talk To Your Grandparents About Race

Grandparents can be the trickiest group of all to talk to about race and racism because they’re likely set in their ways and you may not want to feel like you're disrespecting your elders. If you want to continue to have a relationship with your grandparents who use the n-word casually, for example, Pickell suggests setting boundaries. If they say something racist, say “Please don’t say that around me,” or “I’m not comfortable with that.” If the longer conversation won’t be productive, you can leave it there.

If, on the other hand, your grandparents are willing to listen, then meet them where they’re at. Remember that their perception of what racism is and looks like was formed in a very different time. It can be hard to see past that generational blindness to understand how this issue has evolved.

Like your parents, your grandparents might react defensively at first. They’ll probably list ways they’re not racist or call back to their participation in the Civil Rights Movement. This is another great opportunity to use the “Yes, and…” conversational framework. Be respectful, acknowledge their actions and accomplishments, and then try to move the conversation (and their thinking) forward by tying their past actions to the present — and to future actions they can take.

Maybe they can’t march anymore, but can they donate? Can they call their mayors/governors/representatives and demand change? Can they talk to their own friends? Give them concrete, actionable suggestions — and offer to help. Pickell also suggests linking their experiences directly to the current moment. Read up on Barry Lawson, a Chicago man who was killed by police in the 1930s, or Corporal Roman Ducksworth, Jr., who was killed by Mississippi police in broad daylight in 1962. Draw comparisons in order to demonstrate how little has changed.

These suggestions are by no means comprehensive, nor are they only thing we need to do today. (And tomorrow. And the next day. And for the rest of our lives.) But when it comes to making an impact, there’s no better place to start than at home. Be patient — with yourself and with your family members — but be persistent.

Jordan Pickell, MCP, RCC, clinical counselor who focuses on the impacts of trauma, violence, and oppression

More like this
8 Charities To Donate To During Black History Month
By Alexis Morillo
Why We Love Investigating Friendship Breakups
By Carolyn Steber
What The UK Blocking Scotland’s Gender Recognition Bill Means
By Sam Ramsden
These Artists Are Reimagining Black History Month To Create A Better Future
By Katie Mitchell
Get Even More From Bustle — Sign Up For The Newsletter
From hair trends to relationship advice, our daily newsletter has everything you need to sound like a person who’s on TikTok, even if you aren’t.