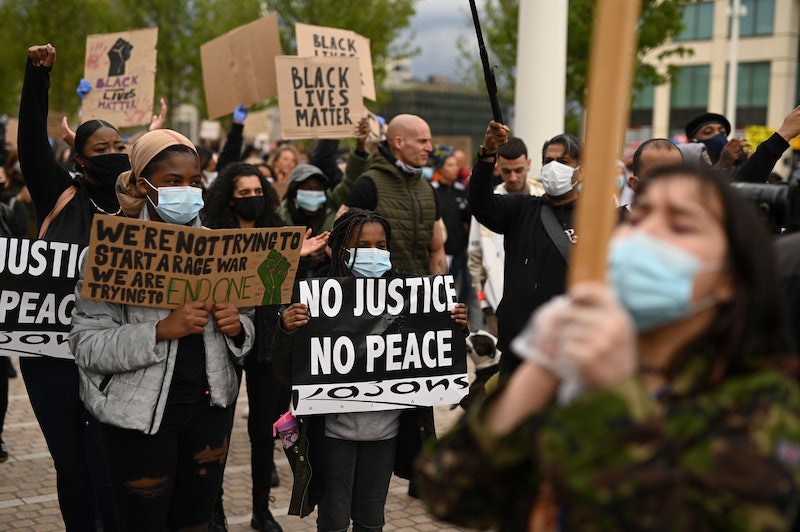 On Tuesday, June 2, you likely saw a flood of black squares filling your social feeds. Dubbed #BlackOutTuesday, the campaign was intended to be a sign of solidarity from non-Black people in the wake of the police killing of George Floyd. These #BlackOutTuesday posts were born from an initial call for a mindful pause within the music industry. Under the hashtag #TheShowMustBePaused, Jamila Thomas and Brianna Agyemang, two Black women in music marketing, began the initiative to urge people to pause their usual social content and redirect to conversations about racism and systemic injustice. However, the posts quickly shifted to an endless stream of plain black squares, often captionless or utilizing the hashtag #BlackOutTuesday, were criticized for being counterproductive, for allowing non-Black people to stay silent in a conversation that needs non-Black people to speak up.

“Optical Allyship” is a term coined by Latham Thomas, founder of Mama Glow and author of Own Your Glow. In an Instagram post from May 1, Thomas defines optical allyship as “allyship that only serves at the surface level to platform the 'ally,' it makes a statement but doesn’t go beneath the surface and is not aimed at breaking away from the systems of power that oppress.” Essentially, it is performative allyship. Instead of standing up, building trust, and doing the groundwork to disassemble white supremacy, optical allyship does the bare minimum. It’s retweeting a contextless MLK quote without learning about the depth of King’s work and his actual words on protesting. It’s using a “woke” cultural moment to build your brand while continuing practices rooted in racism. It’s relying on Black people to do the work for you.

On May 29, writer and editor Mireille Cassandra Harper shared a thread of ways to partake in non-optical allyship on Twitter that should be required reading for anyone who wants to be an effective ally. Her tips are concise, direct, and cohesive, giving non-Black people a straightforward guide to turning their performative allyship into “non-optical allyship.” You can read Harper’s full thread on Vogue or on Twitter.

Harper is one of the many Black people laying the groundwork for dismantling racism, following in the footsteps of activists like Audre Lorde, Angela Davis, and Maya Angelou. Though many non-Black people may be just joining the conversation. There are generations of Black people who have been well aware of the anti-Blackness built into our country, who have been working to fight systemic oppression long before we were filling out feeds with empty black squares. Below are three ways to shift performative allyship to non-optical allyship, to start doing the work.

In her Twitter thread, Harper includes a list of Black leaders, activists, and writers she’s learned from, encouraging non-Black people to familiarize themselves with the annals of Black activism. While many may have the instinct to ask the Black people in their life what to do, how to help, where to start, we cannot expect Black people to be our personal anti-racism guides. This is especially true if you don’t have a close, personal relationship with the person you are asking for help.

Harper lists checking in on the Black people in your life as a form of non-optical allyship. She also retweeted someone who added the importance of having “a pre-existing relationship that invites this kind of intimacy.” They added that this kind of reaching out feels like the “worst kind of [performative allyship].” However well-intentioned this line of questioning may be, it’s still asking Black people to do emotional labor for you. Black people do not owe us their time and emotional energy.

Listening is, of course, imperative to non-optical allyship. Knowing when your voice is helpful and when it is harmful, when it needs to be heard and when it is drowning out more important voices, is crucial. We can start by listening to the Black voices whose work is readily accessible with a simple Google search. Here are some good places to start:

Reposting videos of the police killing of George Floyd perpetuates a harmful cycle, one in which we continue to normalize the propagation of Black death. You should not need to share a video of someone’s killing to prove you care about their life.

Yomi Adegoke wrote about performative grief for Vogue that speaks to the detrimental consequences of sharing such videos, of hastily written captions as an effort to establish oneself on the “right side.” Adegoke writes about the “pics or it didn’t happen” approach to activism, about the danger of needing to post about something merely to prove that you care about it. “Put simply,” Adegoke writes, “the idea that silently doing the work can be negatively weaponised [sic] while empty barrels can sate themselves with the noise they make is dangerous.” This kind of virtue signaling is optical allyship embodied. It prioritizes appearances over Black lives.

3. Plan To Make A Long-Term Effort

The work does not stop after a certain amount of time has passed. It doesn’t begin and end with one post, one march, one #BlackOutTuesday. How do you plan to commit to fighting for racial justice in the long term? Are you going to educate yourself along with Rachel Cargle’s The Great Unlearn? Will you hold your employer accountable for racial justice? How will you use your time, your money, your resources, your voice to continue fighting white supremacy? “Make the effort to do something valuable over a long-term period,” Harper concludes in her guide for non-optical allyship. How will you keep the movement going?

More like this
Prince William Condemns “Unacceptable” Comments Made To A Black Guest At Buckingham Palace
By Shahed Ezaydi
Here's How To Support Jewish People Amid Rising Antisemitism
By Hannah Orenstein
The David Beckham Qatar Controversy, Explained
By Sophie McEvoy
The Indigo Girls Taught Me Queer Relationships Could Be Messy, Too
By Hannah Soyer
Get Even More From Bustle — Sign Up For The Newsletter