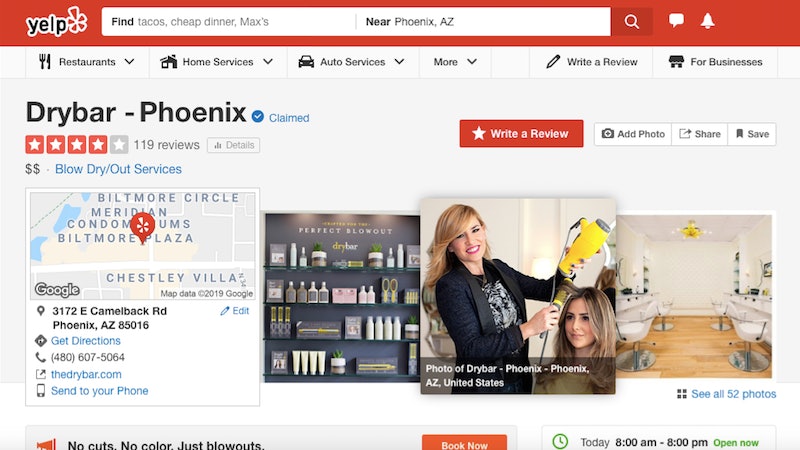 Happy Women's History month! So, one of my personal goals for the new year was to be more conscientious about where I spend my money, and because that's been at the forefront of my mind, I've noticed a lot of people around me who are striving to do the same. Thankfully, one app and website just made a major move as far as helping people make more informed decisions about where they spend their hard-earned dough goes: Yelp just rolled out a woman-owned business tag, which makes it super easy to search for local shops, restaurants, and other establishments that are owned by women, female-identifying, and non-binary business owners.

So many of us already Yelp every place we plan to go before we take the time to get there anyway, so this will be easy to implement. The freshly-implemented attribute appears under the "More Business Info" section of a business's Yelp profile, alongside other information such as whether the location takes credit cards, has gender neutral restrooms, or offers parking. You know the drill. You can also easily narrow down a business search using the woman-owned attribute, which makes it super simple to support a more diverse range of entrepreneurs, an umbrella that a Yelp spokesperson confirmed to Bustle will include women, female-identifying, and non-binary business owners who wish to mark their businesses with the new tag.

It's no coincidence that this update is taking place right now: The new feature is being rolled out now as a way to kick off Women's History Month, and help drive more customers to women-run businesses throughout March (and beyond, of course!). According to Yelp's official blog, the initiative is also launching in partnership with designer Rebecca Minkoff, creator of the Female Founder Collective (FFC) — which is a network of woman-led businesses with a mission to "enable and empower female owned and led businesses to positively impact our communities, both socially and economically" — and Yelp will "automatically list existing [FFC] business members as 'Women-Owned' on their respective Yelp pages" in order to kick things off. Check out Yelp's video below for more information.

If you would like to mark your business as woman-owned on Yelp but aren't part of FCC, not to worry — you can easily get in on the perks of this exciting new feature. According to Yelp's blog, you can change the status of your business to "woman owned" simply by logging into your Yelp business owner dashboard and marking it as a "yes." And if you'd like to request an official Yelp "Woman Owned Business" decal for your storefront, you can fill out this form by March 15, 2019.

"79% of American female entrepreneurs report feeling more empowered than they did five years ago and we’re excited to support the continued success of female business owners," wrote Yelp on its blog post announcing the new attribute. Every time we spend money, we make a little vote with our dollar — and during Women's History Month especially, we should remind ourselves take the extra time to support businesses that help them thrive. Props to a major company like Yelp for taking a step to make doing so even more convenient and accessible.

More like this
Amanda Gorman Shared A Powerful Message On Meghan Markle’s Penultimate Podcast
By Darshita Goyal
An Open Letter To The Person Who Bought Steve Jobs’ Birkenstocks For $218,000
By Ginny Hogan
8 Money Saving Experts To Follow For Accessible Advice
By Maxine Harrison
Here's How To Support Jewish People Amid Rising Antisemitism
By Hannah Orenstein
Get Even More From Bustle — Sign Up For The Newsletter