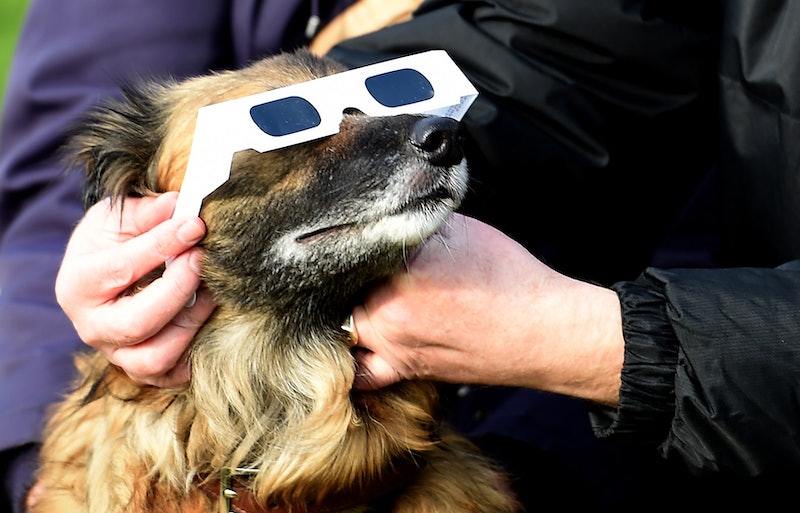 Solar eclipse excitement is sweeping the nation. If you plan to watch, you've likely loaded your phone with eclipse apps, started following eclipse-related social media accounts, bookmarked your live stream pages, and bought your eclipse glasses. But, how can you tell if your solar eclipse glasses are safe? There are tons of phony solar eclipse glasses out there, and if your glasses aren't the real deal you could seriously damage your eyes during this Aug. 21 celestial event.

While it's upsetting that some pop-up companies are allegedly using the solar eclipse as an opportunity to make a quick buck by selling you unsafe eclipse eyewear, it is indeed happening. CNET reported that the problem is so rampant that Amazon is recalling some eclipse glasses as a precaution. If you want to see if your eclipse glasses are safe, NASA recommends checking them agains the American Astronomical Society's Reputable Vendors of Solar Filters & Viewers page, which lists approved manufacturers of eclipse glasses.

"The only safe way to look directly at the un-eclipsed or partially eclipsed sun is through special-purpose solar filters, such as eclipse glasses, or hand-held solar viewers," NASA noted on its eclipse safety page. "Homemade filters or ordinary sunglasses, even very dark ones, are not safe for looking at the sun; they transmit thousands of times too much sunlight."

How To Tell If Your Eclipse Glasses Are Real

According to NASA, eclipse glasses and handheld solar viewers must be verified to be compliant with the ISO 12312-2 international safety standard for such products in order to be deemed safe. However, counterfeiters have gotten pretty savvy, and some are adding phony certifications to their glasses too.

In an article in Quartz, Elijah Wolfson asked Solar Systems owner Andrew Lunt how to identify fake eclipse eyewear. "There’s a design element that’s been generic among all of cardboard glasses for years (remember those red-and-blue lensed 3D glasses?): the part of the cardboard frame that hooks over the ears has a rounded end. APO recently changed their design to have a more squared-off earpiece."

If your eclipse glasses are real, the arm should be square like the one pictured below.

Additionally, the American Astronomical Society posted some other things you can do to check your specs. "You shouldn't be able to see anything through a safe solar filter except the sun itself or something comparably bright, such as the sun reflected in a mirror, a sun glint off shiny metal, the hot filament of an unfrosted incandescent light bulb, a bright halogen light bulb, a bright-white LED bulb (including the flashlight on your smartphone), a bare compact fluorescent (CFL) bulb, or an arc-welding torch," the American Astronomical Society explained.

"All such sources (except perhaps the welding torch) should appear quite dim through a solar viewer. If you can see shaded lamps or other common household light fixtures (not bare bulbs) of more ordinary brightness through your eclipse glasses or handheld viewer, and you're not sure the product came from a reputable vendor, it’s no good."

If you're not 100 percent sure your glasses are the real thing, don't take a chance. Lou Tomososki recounted to Today about how he damaged his eyes during a partial eclipse in 1962. "I have a little blind spot in the center of my right eye," he said.

Apparently, getting a blind spot from looking at the sun is pretty common, but during a solar eclipse it can cause permanent damage.

"Anyone who stares at the sun can get this blind spot,” Dr. Russell N. Van Gelder, a professor of ophthalmology at University of Washington School of Medicine and clinical spokesman for the American Academy of Ophthalmology, told Today. “When you know that you have a problem is if that blind spot has not gone away (the next day)."

Less than two minutes of cosmic wonder is not worth damaging your eyes for life. If your eclipse glasses do turn out to be fake, you can still view the eclipse using a pinhole projection.

"Just cross the outstretched, slightly open fingers of one hand over the outstretched, slightly open fingers of the other," the American Astronomical Society explained. "Then, with your back to the Sun, look at your hands’ shadow on the ground. The little spaces between your fingers will project a grid of small images on the ground. During the partial phases of the solar eclipse, these images will reveal the Sun's crescent shape."

And, the solar eclipse will be live streamed, and widely documented on social media. Not having eclipse glasses is no reason to let FOMO get the best of you, and leave you with permanent eye damage for two minutes of excitement. If you bought solar eclipse glasses from Amazon, and they have been recalled, you should receive an email from Amazon about the recall, CNET reported.

As long as you follow all the precautions for safely viewing the total solar eclipse, you'll be totally safe while witnessing the epic celestial magic.