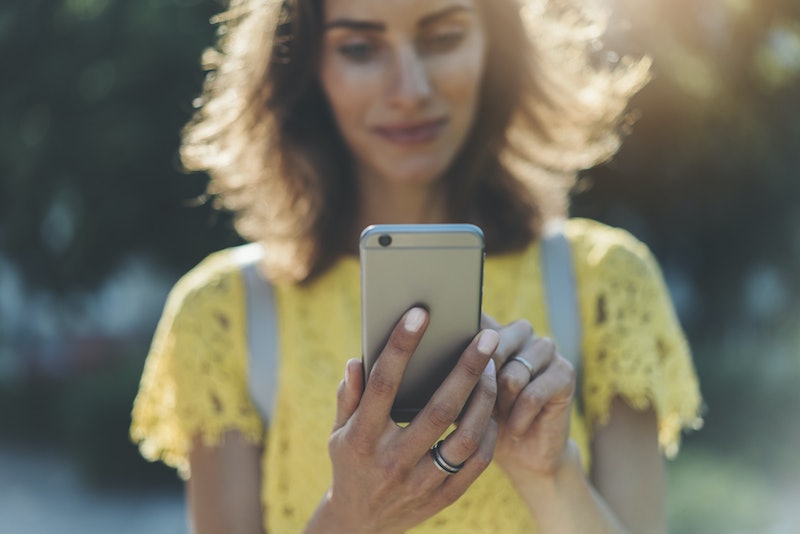 I consider myself a pretty intuitive person, and I'd like to think that I can tell when someone isn't being truthful. However, research indicates that most people can't tell when they are being lied to. The good news is that there are ways to tell when someone is lying. But, once you wade into this territory, it might feel like a full time job separating truth from tall tales because, on average, you are lied to between 10 and 200 times a day, according to the website Awareness Act. If you're thinking WTF, extremely same.

People have such a hard time identifying the difference between the truth and a lie that Certified Fraud Examiner Pamela Meyer's TED Talk, How to Spot a Liar, has been viewed more than 9 million times, according to the website Speaker Spotlight. In her 20-minute TED Talk, Meyer, the author of Liespotting: Proven Techniques to Detect Deception, advises how to spot lies on the phone, in person, and via email by reading body language and by using statement analysis (since you can't read body language on the phone or in an email).

If you've ever caught someone in a lie, then you know it can feel like a punch to the gut. How bad the punch hurts depends on who the liar is and whether the lie is small — I'm only five minutes away (when what they really mean is, I haven't even left the house yet) — or massive — I'm not sleeping with your boyfriend (Translation: I mean not right at this second, but I did last night).

Anyone who says they've never told a lie is automatically a liar, Meyer noted, because, whether it be to spare someone's feelings or talk our way out of trouble, we all bend the truth sometimes. According to Awareness Act, Meyer explained that people lie in order to avoid being punished or to avoid embarrassment; to protect another person from being punished; to exercise powers over others by controlling them; to protect themselves from the threat of physical or emotional harm; to obtain a reward that’s not otherwise easily attainable; to get out of an awkward social situation; to create a positive impression and win the admiration of others; to maintain privacy; and to gain advantage over another person or situation.

What's more, a study published in the journal Psychological Science noted that your chances of detecting a lie is about 50/50. However, this isn't because you don't actually think someone is lying. While your initial reaction might be to call out a fibber, the study found that your conscious brain overrides the unconscious part that can spot a liar, which is why most of us are likely doubt our initial instinct when we think we're being lied to. Meyer calls this a "truth bias."

"Research suggests that Americans are especially predisposed to a 'truth bias' when dealing with other Americans," Meyer told Fraud magazine. "In general, they presume good faith on the part of others, and they believe that people are innocent until proven guilty. When someone answers the phone and says, 'I was just going to call you. You read my mind,' many of us give the benefit of doubt, even if we're not entirely convinced."

How To Spot A Lie

Meyer explained that most people have a "tell" that lets others know when they're lying, and the most common tells are called micro expressions. A deviation from normal behavior, micro expressions can be anything from unusual facial expressions and overly formal language to how you hold a backpack, she told Fraud. People who are skilled in reading micro expressions can determine whether or not someone is lying with 95 percent accuracy.

In her TED Talk summary, Meyer gives some tips for how to identify some micro expressions, and some of these tells are the opposite of what you might expect. Someone might be lying to you if they either fidget more than usual, or completely freeze their upper body, look you in the eye more than they normally do or avoid eye contact altogether, exhibit a fake smile (you can tell by their eyes), or display body language that is in direct opposition with what they are saying. The example Meyer uses is "shaking [their] head while saying yes or shrugging [their] shoulders while telling a confident, good story."

On his blog, Dr. Joseph Mercola, author and physician, provides additional non-verbal cues from Susan Carnicero, a former CIA agent and author of Spy the Lie: Former CIA Officers Teach You How to Detect Deception, that can help you detect when someone is lying. These tips include unusual pauses in conversation, grooming gestures (like fidgeting or playing with their clothes), and hand-to-face movements (touching their face or hair). In the TV show Shades Of Blues, Lt. Matt Wozniak (Ray Liotta) is able to determine Det. Harlee Santos (Jennifer Lopez) is lying because her tell is pushing her hair behind her ear when she's being deceitful.

It's Harder Than You Think

Though, because she leverages their relationship to convince him she is telling the truth, Wozniak's conscious brain eventually overrides his initial unconscious instinct even though he is indeed correct. "A lot of small tells can also show deceptive [behavior] — changing blink rate, or putting physical barriers between the asker and themselves, or changing their tone of voice," TED Summaries explained. "But these can happen naturally as well, it is only when they happen in clusters that you should be suspicious. When dealing with a suspected liar, be curious and friendly, treat them with dignity, and don’t be too aggressive."

Because Santos also pushed her hair behind her ear when she was telling Wozniak the truth, he doubts his instincts that the hair pushing is one of her tells, even though it is. While being lied to feels awful, if you need reasons not to tell a lie Dr. Mercola noted that lying can actually affect your health, which is certainly the case for Santos as she tells more lies to cover her tracks with Wozniak. "People who told only the truth for five weeks had an average of seven fewer symptoms, such as sore throats, headaches, nausea and mental tension, than the control group, with researchers suggesting that lying may cause stress that dampens the immune system," Mercola cited from a study presented at the 2012 American Psychological Association's annual conference.

If you spend all of your time trying to figure out whether or not people are lying, you're likely going to drive yourself bananas, but if you suspect someone is lying to you it's helpful to be able to tell. Check out Meyer's TED Talk for more ways to tell the difference between the truth and a lie, because it's harder than you think.

More like this
How Ovulation Affects Your Sense Of Smell, Libido, & More
By JR Thorpe and Lexi Inks
An Expert Weighs In On The Viral Raw Carrot Salad Trend
By Alexis Morillo
The 3 Zodiac Signs Most Likely To Get Married Later In Life
By Kristine Fellizar
4 Zodiac Signs That Will Take Forever To Admit They Like You
By Kristine Fellizar
Get Even More From Bustle — Sign Up For The Newsletter
From hair trends to relationship advice, our daily newsletter has everything you need to sound like a person who’s on TikTok, even if you aren’t.