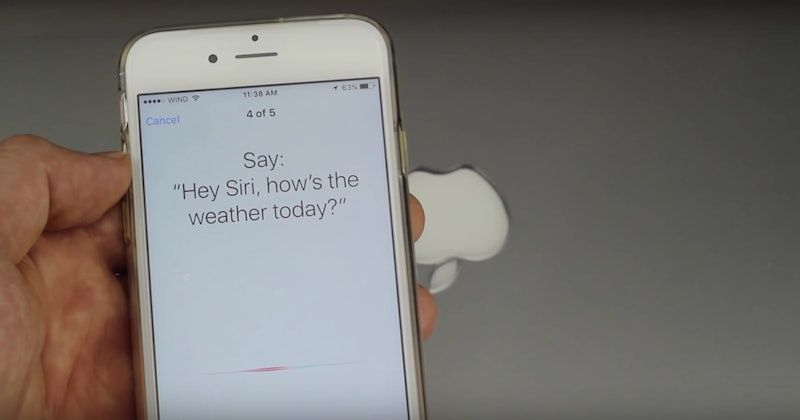 It's easier than ever to get information from our smartphones without putting in too much effort: In 2014, Apple introduced the concept of Hey Siri, a hands-free way to talk to the virtual assistant, and it's been popular since. But if the idea of your phone listening to you makes you feel worried, you might wonder how to turn off the Hey Siri feature altogether.

Much like Amazon allowing you to ask Alexa questions by saying her name, Hey Siri lets you communicate with your device without actually touching it. You might feel like you're being paranoid if you've ever considered whether your phone is eavesdropping on you, but the fear isn't exactly unfounded. In July 2019, The Guardian reported that contractors hired by Apple could listen to your conversations with Siri in the name of quality control. A whistleblower shared that they'd supposedly heard people having sex and talking about private matters — all because customers were accidentally triggering the Hey Siri feature.

We know that customers have been concerned by recent reports of people listening to audio Siri recordings as part of our Siri quality evaluation process — which we call grading. We heard their concerns, immediately suspended human grading of Siri requests and began a thorough review of our practices and policies. We’ve decided to make some changes to Siri as a result.

Along with pausing the grading program, Apple said it's not going to keep audio recordings — instead, it'll allow people to opt-in to sending audio samples to the company. Additionally, Apple employees will be the only people who listen to the conversations with Siri, and any accidental recordings will be deleted. But if you'd simply prefer to turn off the feature, it's super easy.

First, open the settings on your phone and look for "Siri & Search." Once you select it, you'll see a heading that says Ask Siri.

Under Ask Siri, you'll have an option to turn off "Listen for Hey Siri." You'll still be able to toggle Siri on using your phone's side button, but Siri won't listen for her name if the feature isn't activated.

If you want to learn more about what information Apple collects when you're using Siri, tap "About Ask Siri & Privacy" on the Siri menu. You can read Apple's privacy policy in detail and opt out of any features that make you uncomfortable.

And if you happen to be a fan of Siri, it's worth noting the latest iOS 13 software update comes with some new improvements for the feature. According to Apple, Siri now sounds more natural and makes personalized suggestions in your Podcasts, Safari, and Maps apps. Additionally, if you like listening to the radio, you can ask her to play one of the over 100,000 stations. To read more about what's new with Siri and see how the feature has changed over the years, you can visit Apple's Siri site.