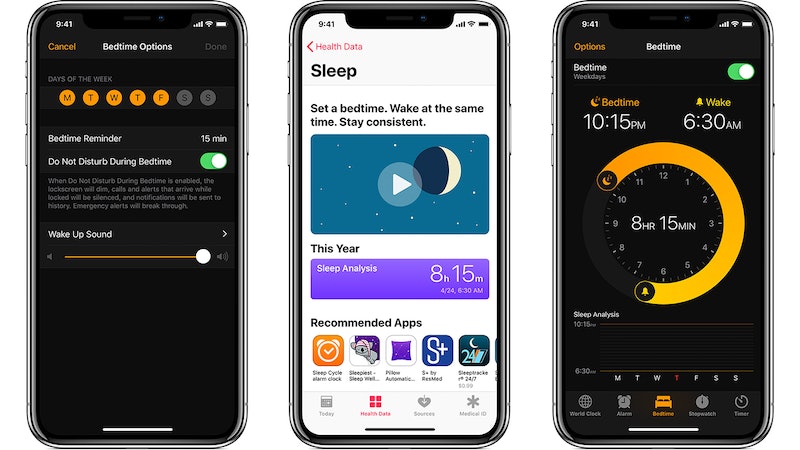 If your phone is getting in the way of your bedtime — who among us isn’t guilty of a little late-night endless scrolling? — perhaps it’s time you use your phone for good. Or at least a good night’s sleep. If you’re an Apple user, learning how to use Bedtime on your iPhone can help clean up your sleep habits instead of inhibiting them.

The Bedtime feature was first introduced back in Fall of 2016. Since then, it’s gotten a few upgrades. With Apple’s latest operating system, iOS 13, Bedtime will integrate with Sleep Mode, a feature that will enable dimmer screen brightness and muted notification at nighttime. Bedtime is essentially a way to monitor your sleep habits, giving you reminders of when it’s time to turn in for the day and tracking just how much sleep you’re getting. Enabling the feature on your iPhone is easy.

First, open the Clock app and select the Bedtime tab. You’ll see it at the bottom of the screen.

Next, select “Get Started.” Here, you’ll be prompted with a few questions. From when you want to wake up, to what days you want the alarm to go off (just in case you want the weekends off), how many hours of sleep you need, when you want a bedtime reminder, and what you want to hear as your alarm tone.

Once you start using the Bedtime feature regularly, you’ll be able to track your night-by-night progress in the Health app. The goal is to have all of your “Sleep History bars” aligned, meaning that you’re regularly getting enough rest, you’re sleeping during the same times each night, and waking up around the same time each day. You can see more in-depth sleep data by tapping the "More history" button.

If you’re hoping to outsmart your smartphone, you’ll want to think again. “If you use your iPhone when you're supposed to be in bed, you won't get credit for that time,” Apple’s website states. “Or, if you snooze the Wake alarm, the time that you stay in bed updates to match.” So, if you’re crushing candy while you should be counting sheep, your phone won’t log those as restful hours.

There are, of course, limits to what the app can track. “Bedtime in the Clock app tracks time that you spent in bed, but not how much you slept or moved,” the website continues. “Your Apple Watch also doesn't track sleep or time in bed.” However, you are able to manually enter the amount of time you slept into the Health app.

There are a lot of things you likely don’t know about your sleep health. For starters, one in three adults isn’t getting enough sleep, according to a 2016 study from the CDC. What exactly qualifies as “enough”? That depends on a few things. For example, women reportedly need more sleep than men and women, as a whole, tend to report poorer sleep quality than men. According to the CDC, adults between the ages of 18 and 60 should be getting at least 7 hours of sleep each night.

Not getting enough sleep can do more to your body than just make you groggy in the morning. “Sleeping less than seven hours per day is associated with an increased risk of developing chronic conditions,” the CDC reports, “such as obesity, diabetes, high blood pressure, heart disease, stroke, and frequent mental distress.” Additionally, staying awake too long can literally make you feel drunk. One study found that going for 17 to 19 hours without sleep lowers your performance to that of someone with a BAC of 0.05.

If you had hopes of “catching up” on sleep over the weekend, some studies suggest that won’t necessarily make up for your lack of sleep during the week. Regular lack of sleep has been linked to things like altered metabolism. So, getting a solid night of rest of a regular basis is the best way to go.