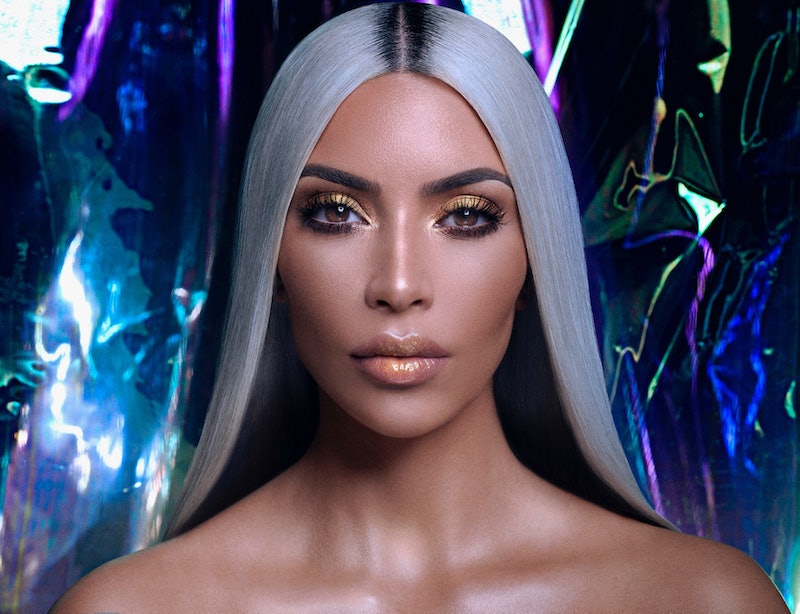 If you had any hesitation that KKW Beauty was not poised to become the next big household beauty name, the makeup mogul has got another thing coming for you, quite literally. On Dec. 1 at 12 p.m. PT, KKW Beauty will launch Ultra Light Beams Gloss and Ultra Light Beams Powder, a surprise release that Kardashian West tells Bustle she wanted to launch in time for the holiday season.

"I felt like I wanted something glitzy for the holidays and if I was going to venture off into something, I thought a glitzy lip and eye would be exactly what I would want," Kardashian West shares over the phone. "I wanted to depart from skin and contour and do something that's fun and so my personality."

If you're a fan of Kardashian West's beauty game, you know she likes to keep things Yeezy-esque minimal these days — a nude lip, some contour, highlight... and that's it. If a glittery or metallic lip and eye seems a bit unusual for her, she wants to assure you that this isn't a total departure from her ~aesthetic~ — it's just a fun way to spice things up and be festive.

"The lip glosses are pretty sheer, so they have speckles of pigment in it and like, a little bit of the glitter, so they look just like a juicy lip — they [won't make your lips look] like they have tons of full coverage," she says. In fact, when Kardashian West is hanging out at home, she tells me that you can likely find her wearing a "sheer, kind of glitzy lip."

Ultra Light Beams Duos (one gloss with one powder), $32, kkwbeauty.com

As for the highlighter powders, well, these should not come as a shock to KKW fans.

"I’ve always worn highlighters, in the inner corners of my eyes, down my nose, on my cheeks, I wear it as eyeshadow. Mario [Dedivanovic] and I are obsessed with highlighter, so we made five really beautiful colors."

Ultra Light Beams Duos (one gloss with one powder), $32, kkwbeauty.com

While she loves them all, if Kardashian West had to pick one on the spot, she'd choose Iridescent because she thinks it's "really pretty," especially with her lighter blonde hair. But her all-time favorites of the bunch would have to be Bronze and Gold, which is evidenced by the insanely epic campaign photos where her body is covered in what appears to be the glittery gold and bronze pigment.

If you plan on nabbing the new glosses and powders when they launch (on Friday, Dec. 1), here is a quick lesson on how to wear them, according to Kim herself.

"I love making the highlighters wet and then applying it — it makes it really intense," she shares. And if you're feeling extra extra, Kardashian West suggests "applying the gloss on top of the pigment" to achieve a really intense wet eye or as she calls it, a "richer glitz."

While most of Kardashian West's products have been restocked after selling out, this holiday collection seems like it could potentially be limited-edition, so word to the wise: If you're a KKW Beauty fan, you're going to want to scoop up all the shimmery goodness while you can.