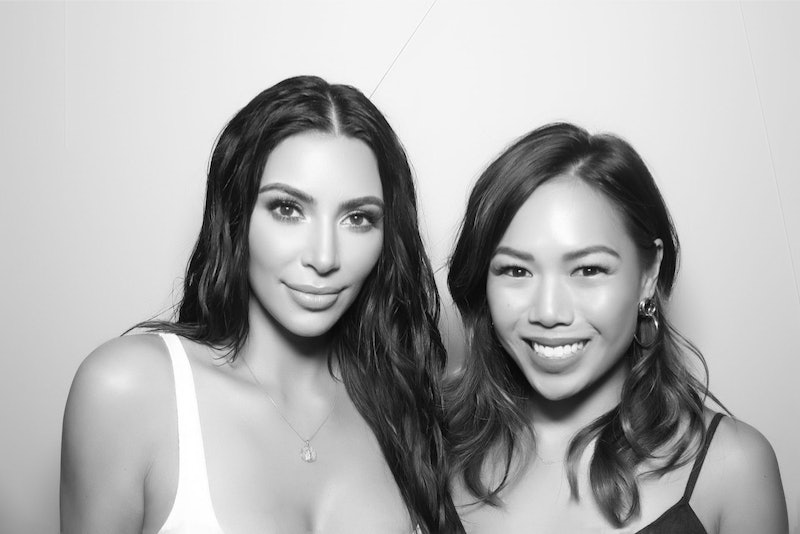 Kim Kardashian West is the kind of beautiful and famous that'll quiet a crowd of people with her mere presence. Case in point: When the beauty icon-turned-mogul walked into a room full of chattering journalists, it went completely silent. To celebrate the launch of KKW Beauty, Kardashian West invited editors to her home — yes, the actual home she shares with husband Kanye and their children, North and Saint — to preview her new Creme Contour & Highlight Kits. I was one of the speechless guests sitting in her living room when she arrived.

I found it rather shocking that Kardashian West chose to host her launch party at her home given everything she's gone through over the last year, but if there's anything I've learned from my years of binge-watching Keeping Up With the Kardashians, it's that she is a total homebody. And while this was no ordinary house party, the vibe was definitely (surprisingly) relaxed, or as much as it could be for being hosted at the Bel Air mansion of one of the most famous couples in the history of modern time.

Their minimalist home had been converted into a temporary exhibit of sorts to showcase her new makeup goods. In lieu of their usual furniture (including the piano North is obsessed with, Kardashian West tells me), there were Yeezy-esque pale pink cubes for seats facing a giant wall embossed with the the brand's logo.

Around the corner was a small room made of mirrors with fresh pale pink roses dangling from the ceiling (perfect for selfies, of course.) Down the hallway was the foyer, which was also decorated with mirrors, along with her newly-launched kits on display in glass cases, as though they were works of art that were not meant to be touched. But that could be further from her intention — Kardashian West can't wait for people to get their hands on the cream-based contour and highlighter sticks.

"It feels so exciting, just to know when you’ve worked so hard on something and to see it all come to life," she tells me, her dewy, bronzed face glistening in the afternoon sunlight. "And just to think that we announced it a week ago. We definitely wanted to keep it quiet until right before it was happening... and now that time is happening! We were all upstairs, like 'I can’t believe it!' Freaking out."

This sales model — waiting until right before the launch day to announce a product — should be very familiar to beauty fans, especially those who have shopped her sister's Kylie Cosmetics products. I was a bit skeptical it'd have the same "break the internet" effect as Jenner's Lip Kits, but I was wrong. Only a few hours after the products hit the internet, the Creme Contour & Highlight Kits completely sold out. According to Time, approximately 300,000 kits were sold, totaling a $14.4 million payday for Kardashian West. Of course, she's not stopping there.

"I have the most amazing concealer kit coming out, which I’m so excited about. It’s not coming out right away, but it’s coming out soon," she tells me. "I feel like I’ve perfected this whole system. I used to, like, whiteout my entire under eye and it was just so crazy... I still have dark circles under my eyes, just being Armenian, and having to figure that out has been challenging. It’s taken years, but I got the system down so I’m making it into a kit for you guys."

If you're wondering what the difference between KKW Beauty and Kylie Cosmetics is, here's the long and short of it: Jenner is 19 years old, and Kardashian West is a 36-year-old mother of two. While Kylie Cosmetics will continue to reign supreme in the lips and eyeshadows market for younger women, KKW Beauty will focus more on cosmetics that can do a lot in a short amount of time with anti-aging and skin care elements for women who are a little older. This is crucial for Kardashian West.

"I am always looking for that youthful magic mirror, serum — anything you can find, anything that can help," she says to me, almost sighing. "If we have to wear makeup, it should be doing something. At least that’s how I think now, you know, being 36 years old and wanting just anything that I could to try and help out a little bit."

I want to scoff after she shares this with me. The woman's skin is impressive, to say the least, for being an almost-40-year-old mom. I have to remind myself that it helps to be a very successful (read: rich) celebrity with access to the best of the best facialists, dermatologists, and skin care products. Still, I needed to know how one should apply their contour kit to recreate her enviable Kim K glow.

"Obviously, [first] make sure your face is really clean. I love moisturizer — it kind of gets the product to slide a little bit. And then I would just start with a bit of foundation all over your face, so your skin tone is even. Then I would do the contour over, blend it, and then set it with a powder, like a light powder so it’s just not too heavy."

Kardashian West is quick to answer this question, as though she's a professional MUA herself. It's in large part thanks to her longtime makeup artist and dear friend, Mario Dedivanovic, who she's worked with for a decade and who has not only taught her the tricks of the trade, but also helped her face become one of the most sought-after in the business. When it came time to launch her own beauty brand, Kardashian West didn't turn to Kourtney or Khloé or even Kris for advice — she only confided in Dedivanovic.

"For this one, it was just me and Mario. Everyone is so busy in the family, and you know, sometimes too many opinions can get in the way and confuse you, so I just have to stick with what I love," she tells me. "Mario’s opinion is very valid to me and he totally knows what he’s doing so I feel like we’re such a good team and we know what each other wants so well that we just have to trust each other."

Kardashian West says that she and Dedivanovic are constantly talking makeup, sharing different looks they see on other people, including ones that they are tagged in. "I get inspired by everyone else. I love to see everyone else's looks — we're even copying some of [them]," she says.

While this might sound far-fetched — a mega star scrolling through strangers' Instagram feeds — I have to believe it. The entire time I've been sitting with her, I've gotten nothing but genuine and sincerely sweet vibes. (Also, her phone is never more than a few inches from her hands.) Kardashian West is kind, gracious, smart, and eloquent — descriptors I didn't originally expect to use when I walked through the doors of her house. But life is funny that way — one day you're writing about Kim Kardashian's newly-dyed blonde hair behind a laptop, and the next, you're sitting in her living room, having a genuinely nice conversation with her about makeup and Moscato.

More like this
Beetles Gel Polish Is The Secret To At-Home Manicures That Last
By Olivia Rose Ferreiro
E.l.f. Cosmetics’ Halo Glow Liquid Filter Is My New Dewy Skin Essential
By Olivia Rose Ferreiro
July’s 13 Best Beauty Launches, According To Our Editors
By Bustle Editors
All M.A.C. Cosmetics Lipsticks Are Buy One, Get One Free Right Now
By Audrey Noble
Get Even More From Bustle — Sign Up For The Newsletter