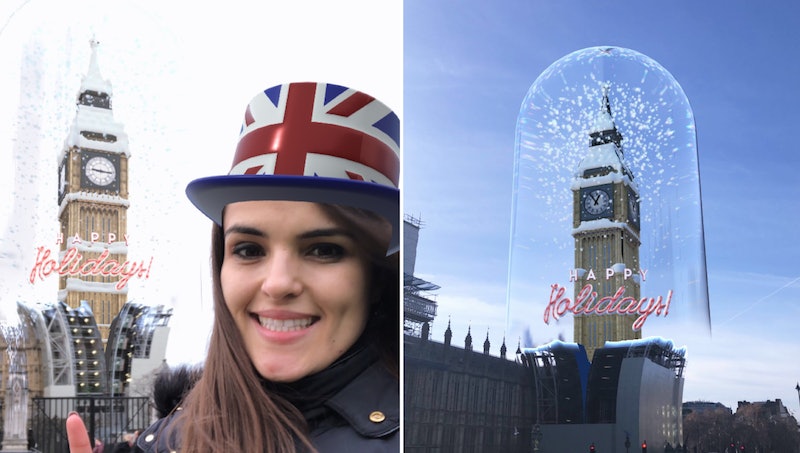 From bunny ears to the golden sunlight filter that makes everyone look glowy AF, is there anything a Snapchat filter can’t fix? Whilst it is doing the most for your selfies, it is also giving one of London’s most iconic tourist attractions a helping hand during this festive period. There is no denying that Big Ben doesn’t look its best right now and may not be the prettiest in the back of your pictures if you are heading to Westminster over Christmas. However, there may be a way to save your festive snaps. Here's how to use Snapchat's Big Ben filter, which will bring the clock back to life — ish.

In a statement sent to Bustle, Snapchat revealed it is launching one of the first large-scale, 3D mapping Augmented Reality technologies on the app, thus allowing users to snap the clock tower without the scaffolding surrounding it. It sounds complicated and is seriously impressive but also incredibly easy to use.

Whilst Big Ben goes under reconstruction to restore it to its former glory Snapchat are helping you get into the festive spirit by developing a lens which will show the clock tower in a snow globe with the words “Happy Holidays” written underneath. I can’t think of any other ways Big Ben could be more Christmassy. The Snapchat Lens will even reflect the correct time on the clock face and replicate Big Bens bongs which we haven’t heard in so long.

If you like the sound of this Christmassy lens and want to try it for yourself it couldn’t be easier — providing, that is, you're in London. You simply need to be within 300 meters of Big Ben with location permission enabled on Snapchat. You need the latest version of the app installed to your phone and an iPhone 6 or upwards or a mid-range Android. To find the Lens (and not give Big Ben some bunny ears) you simply need to tap the camera screen to bring up the Lens carousel and it will be the first one available. All that is left to do then is get snapping.

“We are thrilled to unwrap Big Ben for our Snapchat community in London. This holiday, we wanted to showcase the imaginative power of Snap’s Augmented Reality experiences by deconstructing the scaffolding around Big Ben — at least for a few special moments.”

It seems almost too good to believe it could be done.

Work on Big Ben began in May 2017, and was silenced on August 2017 until 2021. The repair work is urgent and there is currently 98 meter scaffolding surrounding the clock tower which isn’t predicted to be taken down until May 2018. For many people Big Ben is crucial to the central London skyline over Christmas and New Year. With this new technology from Snapchat you can snap away to your hearts content, replicating Big Ben looking its best. Even if it is just for a moment through your phone. And as the filter will be available for a number of months, the lens will adapt to the season.

Pilipski said: “We believe that every great AR experience reveals new possibilities. Our goal was to bring together the most cutting edge mapping and imaging technologies to create the kind of unique, location-specific experience that only Snap — and perhaps Father Christmas — can deliver.” Well this truly is a festive gift for snappers heading to London this Christmas.