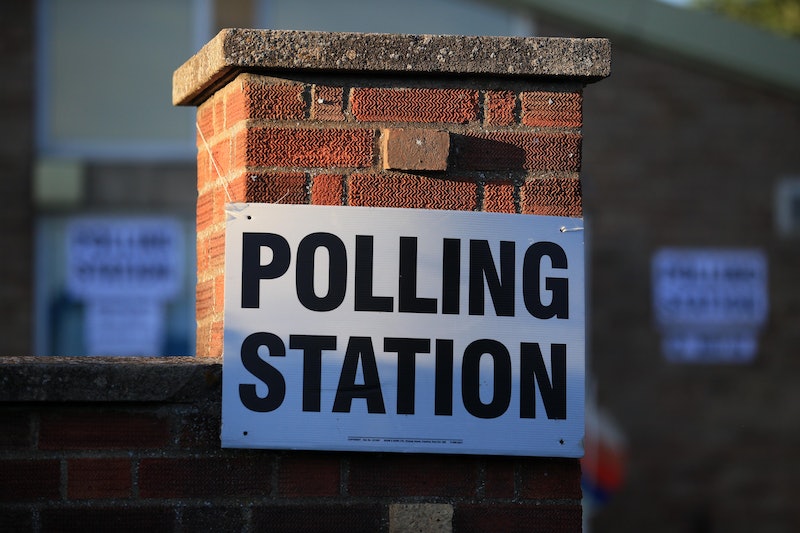 It’s really happening. After years of uncertainty with Brexit, on Dec. 12, 2019, the UK will hold a general election. We all know why it’s so critical to vote, but knowing how to register to vote, if you’re eligible to do so, and how to cast your ballot is important, especially for first timers. So here's what you need to know about voting in UK general elections.

First and foremost, to take part in the December 2019 vote, you have to be registered by Nov. 25, 2019. In order to register, you have to be 18 or over and be a UK, Irish, EU, or Commonwealth citizen with a permanent UK address. If you are a British citizen living abroad, you can register to vote if you left the UK within the last 15 years and were previously registered at an address in England, Scotland, or Wales.

The easiest way to register is online, but you can also do it via a paper form — though there are two different forms: one for those living in England, Scotland, or Wales and one for those living in Northern Ireland. Remember: you only need to register once, not for every election. During the process of registration, you’ll be asked for your National Insurance number, but you can still register if you don't have one.

There are three ways to vote: in person, by post, and by proxy (the latter being when someone votes on your behalf).

If you live in England, Wales, or Scotland, you won't need to bring anything with you to the polling stations. You just need to give your name and address to the staff working there when you arrive.

If you live in Northern Ireland, you will need to bring photo ID with you in order to vote (that can be your passport, driving licence, Electoral Identity Card, or certain kinds of Translink Smartpass).

So, how does the voting system work? In a general election, you get one vote for a candidate in your constituency (your voting district), the candidate with the most votes becomes your MP. Most of the candidates are from a political party (but not all). After the election, the leader of the party with the most MPs becomes the Prime Minister.

With all the uncertainty occurring in this country, there’s never been a more critical time to vote. Sometimes as individuals it’s easy to feel powerless, but voting in the December general election could really change things in the UK. Your vote matters.

More like this
What The UK Blocking Scotland’s Gender Recognition Bill Means
By Sam Ramsden
Ben & Jerry’s New Sundae Flavours Are A Chocoholic’s Dream
By Sophie McEvoy
90 Epic Truth Or Drink Questions To Play 'Say It Or Shot It' With
By Bustle UK
Gen Z Are Twice As Likely To Identify As Queer, According To New Data
By Sam Ramsden
Get The Very Best Of Bustle/UK
Sign up for Bustle UK's twice-weekly newsletter, featuring the latest must-watch TV, moving personal stories, and expert advice on the hottest viral buys.