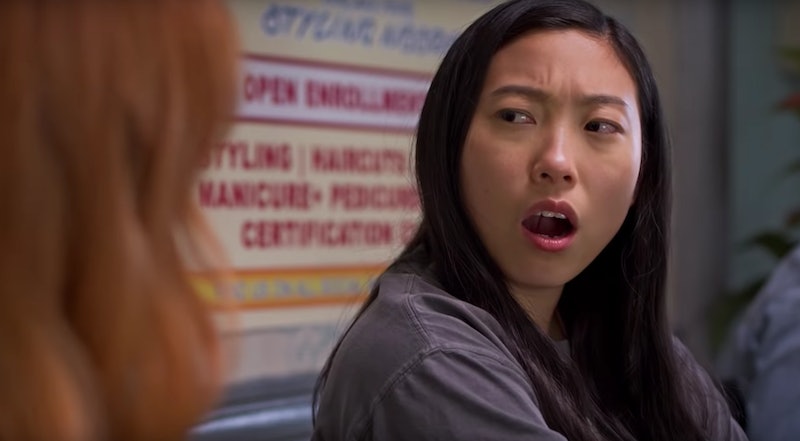 Awkwafina has been slaying the film industry with her roles in Crazy Rich Asians, Ocean Eights, and The Farewell, and now she’s taking her immense talent back into the TV sphere. Playing a fictionalised version of herself in her twenties, Nora From Queens is inspired by her real-life growing in the New York neighbourhood, as Deadline reports. By now you’re probably wondering how to watch Nora From Queens in the UK, and, tbh, same.

Sadly, the series only seems to be airing in the U.S. right now. It premieres this Wednesday (Jan. 22) on Comedy Central, but there’s no listing for the series on the UK’s channel. I’ve reached out to Comedy Central UK to see whether Nora From Queens will eventually air here and have yet to hear back, but I’ll keep this post updated.

There’s a pretty big chance it will though, seeing as its already been renewed for a second series and it hasn’t even aired yet. “We are in awe of Awkwafina’s creative genius on every level and we could not be more excited to embark on season two with the entire Lin family in [Nora From Queens],” co-heads of original content Sarah Babineau and Jonas Larsen said in a press statement.

Hopefully Nora From Queens does make its way across the Atlantic in due course, but thankfully there’s plenty of Awkafina content to enjoy in the meantime. If you’ve not yet watched the masterpiece that is The Farewell, on Feb. 12 you’ll be able to stream it on Amazon Prime. Sadly The Farewell was snubbed when it came to 2020 Oscar nominations, but Awkwafina has said she appreciated the journey nonetheless. As the Daily Mail reports, the actor “acknowledged what people felt as a lack of diversity among nominees,” but felt that there was a definite increase in cultural representation last year. “I think there’s always more work to be done, of course, and I think I’ve had a pretty exciting ride,” she said at the 2020 Winter TCA Press Tour. “I can’t be more grateful to do what I love to do and to be recognised at least a little bit for that is enough. It’s great.”