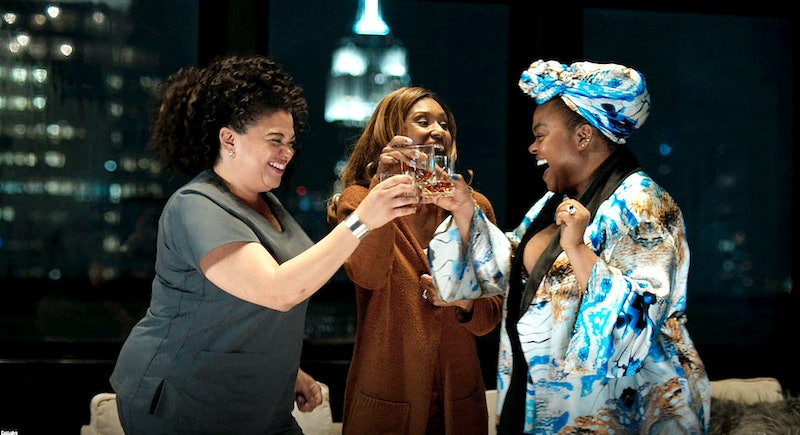 It has certainly been a year for movie to TV adaptations. The likes of What We Do In The Shadows, for example, have been an absolute hit. And what more would you expect really? There's a beautiful safety in watching something when you already know the general gist of the story. What's even better is when a format you know and love is turned on its head with a more contemporary twist. Like for example the new TV show based on First Wives Club. You'll be dying to know how to watch First Wives Club in the UK.

The brand new TV series is being shown on US channel BET's new streaming service BET+. I reached out to a representative of the broadcaster for any information on a potential airing in the UK and they told me: "As BET+ continues to grow, so will its offerings. While the service is currently not available in the UK, more updates to international access are coming soon. We are just getting started!"

So it looks like it won't be airing on BET UK just yet. Which is super frustrating as this show looks like it's absolutely lit. And just the tonic for your winter blues. It's already proved a hit thus far with fans on BET+.

Like I said before, the show is a reboot of the classic 1996 film which is honestly one of the best films of all time IMO. If you haven't seen it you absolutely must. It's a story of three best friends, played by Bette Midler, Diane Keaton, and Goldie Hawn, reuniting after the tragic death of another friend of theirs. All of them are battling through divorces and trying to get to grips with life as the first wife. It's all the ups and downs of divorce, of feeling left behind, and of course of getting your power back after it all. Basically super emotional and all kinds of LOL.

According to Oprah Magazine, the new edition is more of the same and then some with a brand spanking new cast. It's the story of three successful women in New York City who suddenly find themselves forgotten by their partners. Despite all of the love, support and partnership they've shared throughout the years.

Hazel, played by Jill Scott is based on Hawn's character and is the mega successful R&B star whose record label boss husband treats her badly. With not only wandering eyes but also zero respect for her whatsoever.

Bree, played by Michelle Buteau is a hardworking surgeon who's devastated to learn that her stay-at-home dad husband has been cheating on her with another parent.

And last but not least Ari, played by Ryan Michelle Bathe, is the wife of a politician. Who, despite being unhappily married, is somewhat in denial about the whole situation.

The show is absolutely the tonic for anybody who needs a bit of LOL in their life and an excellent display of how together, women are stronger.