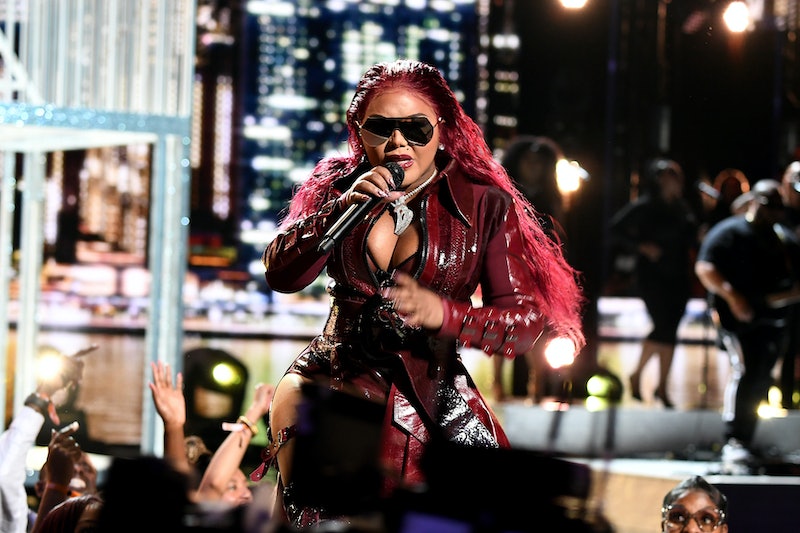 What happens when you put a 90s hip hop legend, one third of TLC, and a noughties R&B singer on a cruise ship around the picturesque Caribbean? You get the new American reality travel show Girls Cruise on VH1. The docuseries sees Lil' Kim and her famous friends, including Waterfalls singer Chilli and Grammy Award Winner Mýa, travelling around the Caribbean to find themselves and connect with each other. Expect friendship and adventure on the high seas. Here's how to watch 'Girls Cruise' In the UK.

According to VH1's Facebook page, the new docuseries started airing on VH1 on Monday 15 July 2019, and some of the best bits can be found on VH1's YouTube channel. However, looking at VH1's UK schedule, there doesn't seem to be any mention of Girls Cruise. I have reached out to a rep to find out more, and will let you know of and when I hear back.

As Vogue reports, VH1 has promised there's lots in store for audiences: "As they travel through the Caribbean, the crew hits the high seas on an epic journey filled with hilarious adventures, emotional breakthroughs, and spicy romances as they cultivate bonds and unapologetically live their best lives."

The show has the same vibe as women-focused comedies such as 2011 Bridesmaids and the more recent Wine Country. Most notably, Girls Cruise seems to bea riff on the 2017 hit film Girl's Trip, in which four old friends (played by Regina Hall, Queen Latifah, Jada Pinkett Smith, and Tiffany Haddish) take time away from their busy schedules and catch up by going on a hilarious holiday to New Orleans.

Along with Mýa and Chilli, Girls Cruise will see a few more famous faces cruising along side executive producer Lil' Kim. Pretty Vee and B. Simone, comedians from Wild ’N Out, Tiffany Panhilason, an actor who has appeared in shows like Jane The Virgin and Two And A Half Men, and Charly “Char” Defrancesco, the only man on the cruise and a former model, will all be hitting the high seas. The group will island hop from Barbados to Trinidad and Tobago, ending up at the world famous Carnival, according to Essence.

And this type of trip is a first for some of the women on Girls Cruise. Speaking to Essence magazine, Mýam who has released seven studio albums, explained that she was stepping out of her comfort zone by taking to the sea, something she has never done for such a long period of time:

"With Kim, it’s always over the top and fabulous. But I didn’t know about a cruise. I have a fear of water, and being in the deep sea. I have a major phobia. And I had reservations being in a group setting with people I didn’t know, and also I didn’t know because anything can happen on vacation — safety wise, adventure wise, or even party-pooper wise."

Mýa and Lil' Kim have previously worked together, most memorably for the 2001 rendition of the 1975 hit Lady Marmalade for the Baz Luhrmann's Moulin Rouge. They appeared alongside stars such as Pink and Christina Aguilera.

The new reality show is set to be hilarious. Audiences will witness music royalty as they live the glamorous life, visit beautiful Caribbean beaches, talk all things nautical, and, of course, catch up on some serious bonding time between old friends and new ones.