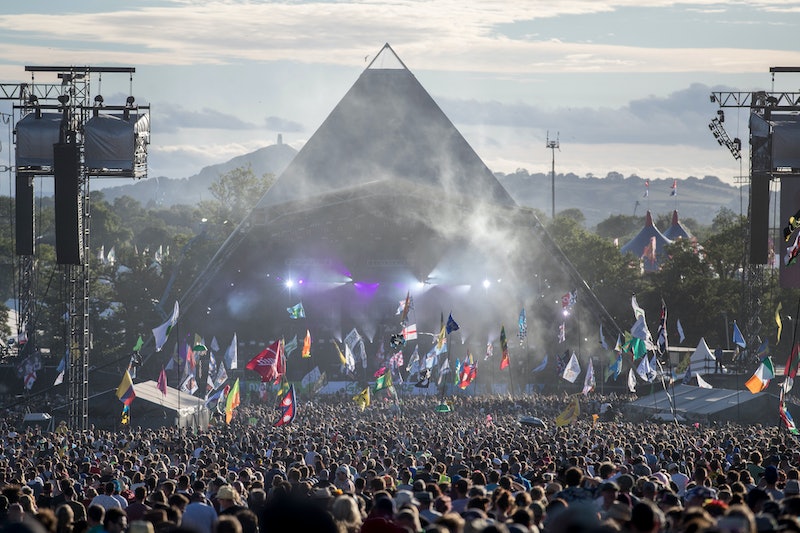 Here's the upside. Unlike your friends who did manage to get tickets, you're not fretting about the possibility of rain, and watching Janet Jackson in a thunderstorm with mud in your hair. Instead, you're thinking about what takeaway to order while you get stuck into The Cure from the comfort of your sofa, well away from any rain. So, although you won't be getting the full experience, you will be getting the best parts of it, as the best festival in the world comes to your screen. Here's how to watch Glastonbury 2019 on TV.

Taking place between Thursday, June 26 and Sunday, June 30 at Worthy Farm in Somerset, Glastonbury 2019 can also be found inside your TV screen, as this year, the BBC are more devoted to their Glasto coverage than ever. As well as transmitting 30 hours of festival coverage to your rainless sitting room, the BBC will also be launching BBC Radio Glastonbury. So, while you flick through the usual Glasto suspects — BBC1, BBC2, and BBC4, as the Radio Times reports — you can also have the festival on the go when you're away from a screen.

BBC Radio Glastonbury goes on air from Thursday, June 24, and if you want to get planning already, then you're in luck, as the BBC has the radio's schedule up already on its official site. According to a statement from the BBC, the station will cease airing on Monday, July 1, just after the festival's wrapped up.

For those who'd rather just stick to the telly, then you might want to take note of those undoubtedly epic headliner sets. According to the Radio Times, you can catch all three headlining acts on BBC Two, and from the looks of The Guardian's stage times, Stormzy's set should be due to air on Friday night at 10.15 p.m., with The Killers' on at 9.45 p.m. on Saturday night, and The Cure rounding things off on Sunday night at 9.30 p.m.

But I imagine that you won't just want to see the headliner sets. Glastonbury is chock full of both legendary acts and exciting up and comers, and you can see how to watch the ones on your list with the help of the BBC's full radio and TV schedule. While most of the major sets will air on BBC TWO, make sure to keep your finger near that red button, as you won't want to miss Kylie's set on BBC1 at 6 p.m. on Sunday, June 30, and the likes of Billie Eilish and Jeff Goldblum (no, they're not playing together, I'm afraid), who'll have their sets aired on BBC Four.

So, don't feel too envious of anyone who managed to get tickets. While they'll have to traverse a huge, and what's likely to be a very muddy field, in order to see their favourite acts, all you'll have to do is turn on the radio or press a red button. So, who really pulled the short straw here?