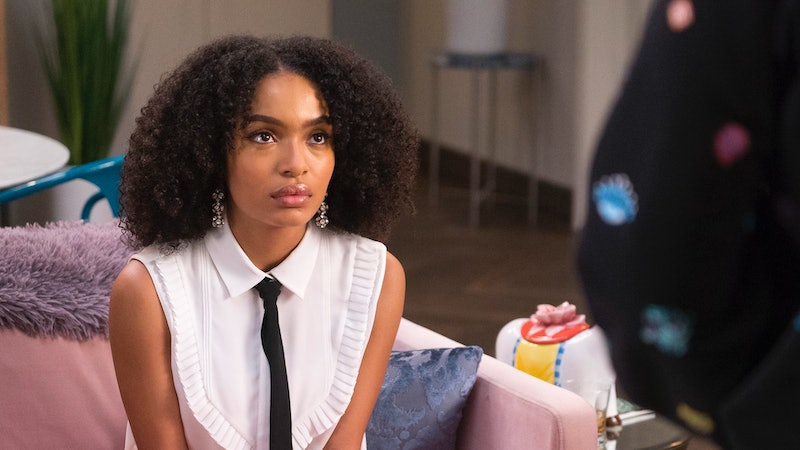 The U.S. sitcom Grown-ish premiered back in 2018 as a spin-off of the multi-award winning series, Black-ish. The sitcom centres around the Johnson family's eldest daughter Zoey as she goes to college, and begins her journey into adulthood. Grown-ish is currently airing its second season over in the U.S., and was recently confirmed to be returning for a third. So, you might be wondering how to watch Grown-ish in the UK.

Sadly, Grown-ish is not currently airing in the UK, and according to Digital Spy, the series isn't available to watch on UK streaming platforms either. There has been no word as to when British viewers can expect to enjoy the American sitcom, however it took the show's parent series, Black-ish, more than two years to arrive in the UK after its initial U.S. premiere date — so we could be waiting quite a while.

Grown-ish currently airs on Freeform over in the states, and according to the channel's official website, the spin-off series follows Zoey Johnson as she moves on to college and "tries to navigate the messy world of campus life." Zara is played by actor Yara Shahidi, and she is joined in the cast by Trevor Jackson, Jordan Buhat, Emily Arlook, Chloe and Halle Bailey, Francia Raisa, Luka Sabbat, Deon Cole, Chris Parnell, and more.

According to Variety, the series tells stories from a millennial perspective, and explores the political, relationship, and social issues students might face in higher education. President of Freeform, Tom Ascheim, previously discussed how the series, along with their catalogue of other shows, aims to encourage the younger generation to feel empowered. He said, "At Freeform, our shows are uncompromising and bullish on what’s possible when young adults are empowered to be themselves and share their voice about the things that define them and their generation."

Details about Grown-ish series 2 lie ahead, so be sure to look away now if you don't want any spoilers.

As mentioned previously, Grown-ish is currently in the midst of its second series in the U.S., and according to Deadline, the sitcom will continue to portray Zoey's transition into adult independence.

Speaking about her character's development in the current series, Shahidi told Deadline, "This is the first time that Zoey is generally out of her bubble because she’s always had that socioeconomic status to fall back on. Even in those moments where she is connected to the world around her, there’s that layer of the class system and the fact that she has been raised in this wealthier lifestyle... so her being cut off is such a shift… I appreciate the journey the character goes on."

And it seems as if both viewers and critics are thoroughly enjoying Johnson's college shenanigans, because the show's first outing currently holds an impressive 94 percent approval rating on Rotten Tomatoes.

So, although Grown-ish is (rather annoyingly) not yet available to watch in the UK, it sounds like us Brits have a lot to look forward to. And I cannot wait to get stuck into this brilliant U.S. sitcom.