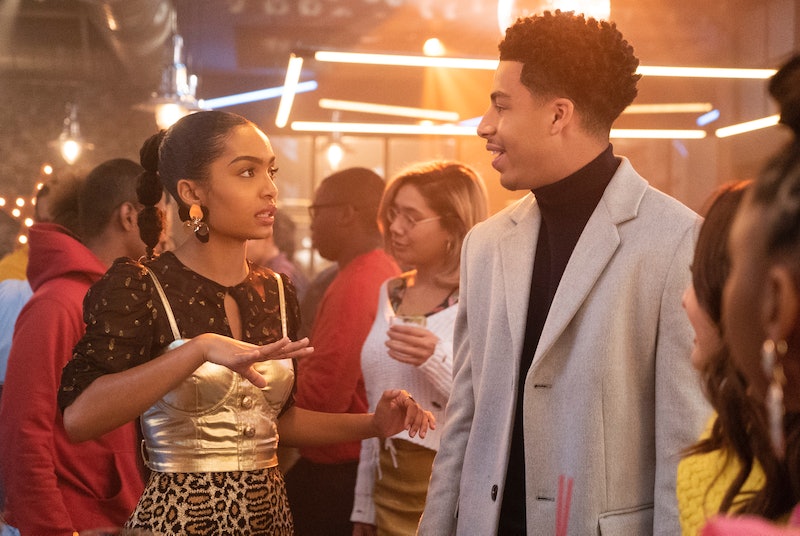 Spoilers ahead for grown-ish Season 2. Every now and then, the voice of reason you need comes from the most unexpected places. This week, it was Junior's advice to Zoey during grown-ish's June 12 episode, "You Decide," that ended up being exactly the tough love to help her turn around her several quickly crumbling relationships. As these things tend to go, however, Zoey, first had to sift through some not-so-great guidance — some tips more misguided than others. After all — as was the case with Zoey and Ana's recent feud — there were plenty of disparate opinions to go around in this week's installment of Freeform's beloved teen series.

So when you're getting all these different takes on how to apologize (or if you should try to make amends at all), whose guidance takes precedence exactly? How do you really decide? Let's break down Zoey's saga, as an example/cautionary tale.

Although her sad rift with Ana is heavily looming following last episode's stone cold ending, Zoey's focus is firmly on mending fences with boyfriend Luca. True to form, she's, first, gotta make a few missteps all on her own. Sure, she may have not have talked to Luca for a solid week, but, if she shows up at his door with a simple "I'm sorry," that'll suffice, right? Wrong.

"In an age of fast beefs and even faster makeups, have we become so desensitized to other people's hurt feelings that we don't even realize when that simple "I'm sorry" isn't enough?" Zoey wonders in her fourth wall-breaking commentary.

In the case of her and Luca, she seems to be right on point — as Luca was not here for her "half-assed apology," as he called it, also repeatedly referring to Zoey as "Chief." He also reminds his girlfriend that "the world doesn't start and stop with Zoey Johnson." (This seemed like a novel idea to the protagonist.)

Now officially "curved" by Luca, Zoey clearly wasn't successful in going this one on her own and had to call in the reinforcements for further guidance. Before viewers get to hear Junior's sage wisdom — and some much-needed hilarity, too, of course — Zoey first turns to celebs' strategies for squashing beefs: IG posts, Twitter apologies, joint mix tapes... OK, so none of those really seem to apply, so moving on...

Who can one trust most in these matters? Their girlfriends, right? Enter Jazz, Sky, and Nomi — each with a very different perspective. While Sky claimed the quickest path to forgiveness from a man involves wearing a "puff coat with nothing underneath it but a candy necklace and a pair of red Cortez," Jazz recommends not apologizing at all and ignoring Luca completely.

"Playing games gets you the power," Jazz asserts. "If you want the upper hand, you've gotta show these dudes zero love."

Then there was Nomi's take, which was shaped, of course, by a string of texts from her professor and one-time love interest, with whom she'd recently had a volatile encounter. "I mean, you can't just like play with people's emotions and then suddenly expect them to forgive you. Why don't people understand that?" While she was mostly referring to her own situation, Nomi's was the only assessment that didn't involve playing some sort of "ridiculous" game play.

Even so, Zoey decided to follow Jazz's technique, assuming that "savagery plus power equals forgiveness." Wrong again. Her couldn't-care-less attitude towards Luca resulted in him telling Zoey, "Good luck to you, bro. I am off this," before exiting Titanium.

In the end, however, it was Junior (AKA Andre Johnson, Jr.) — rolling up to Titanium as Zoey's wingman — who dropped the truth bomb Zoey needed to hear. (This was, of course, after he hilariously told her something she really didn't want to her: that he needed condoms "preferably magnums" for a hookup with Sky.)

Junior's advice? After proving his point that Zoey's apologies tend to be "pretty empty," he suggested that she get out of her feelings, stop being defensive, and "try to apologize for someone else's benefit," instead of just her own.

As much as she hated to admit that her little bro was right, Zoey's big lesson was that she'd been so caught up in her own emotions that she didn't realize she was hurting everyone else in the process. (Junior for the win.)

Cue the Zoey Johnson apology tour, which began with Ana — and let's be honest, she owed her one. At the top of the episode, Zoey was super petty, purposely drinking almost all of the milk her former BFF was about to pour on her cereal, leaving her with only a couple drops — and giving her an intense stare-down in the process. The savagery only continued later on.

After finally making amends with Luca, it seems that Zoey is finally beginning to get her life back on track. As she summed up, "As improbable as it seemed, my little brother was right: To get the forgiveness I was seeking, I had to forgive first."

So when it comes down to it, maybe it is your flesh and blood that will always have your best interest at heart. Either way, with Junior's help, it seems that, for now at least, all's well that ends well at Cal U.