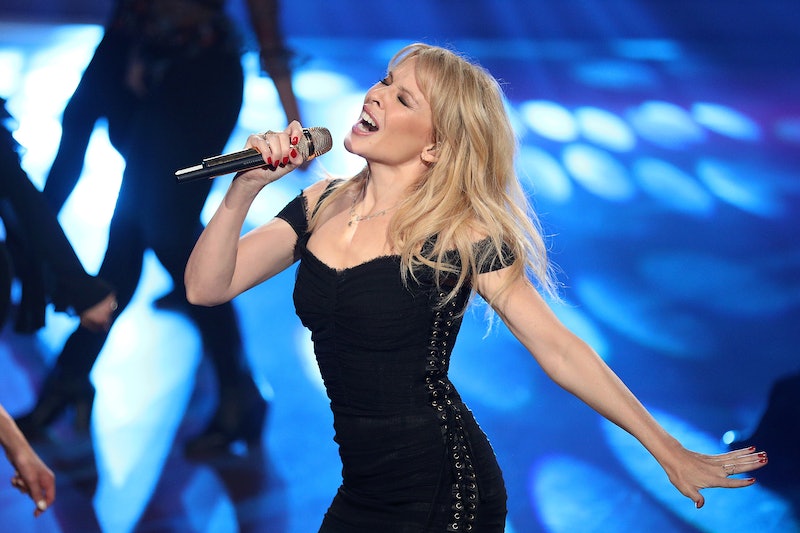 For a lucky few, watching Kylie Minogue at Glastonbury will be as easy as figuring out how the hell to get to the Pyramid stage. However, for most people that pleasure will be enjoyed from the comfort of their own homes. Whether that's a blessed relief or you're completely gutted: fact is you're not getting in babe. Anyhow, just because your festival experience isn't actually on Worthy Farm who says you can't have your own little party? Finding out how to watch Kylie Minogue at Glastonbury will make the whole process a lot easier to organise.

I mean nearly everything is easier than organising getting to actual Glastonbury itself.

OK so as always, the mothership will be broadcasting the event. Yes, the BBC. So get that flatscreen hooked up and that TV license on fleek, am I right?

So according to the Times the headline performances will be broadcast across BBC Two and BBC One. Minogue's sure-to-be show-stopping performance will be broadcast at 6 p.m., Sunday, June on BBC One. Meaning you have plenty of time to re-learn her complete back catalogue and muse on potential cameos. Because goodness gracious, this woman has had some really great collaborations in her time.

We all know one of the best bits about the headliners of the festival each year is speculating about potential appearances on stage. I mean, come on it's all about that buzz. And Minogue is not about to disappoint. If you look at all of the amazing collaborations she has done over the years, there is no way it won't be good. Yes, it has been illustrious AF thus far. Nick Cave, Robbie Williams, The Scissor Sisters, Jason Donavan, Jack Savoretti. Guys the list is too long to contemplate you might get over excited.

Minogue's headlining performance is going to be some serious entertainment and an emotional experience. Not only for fans, but for the Aussie pop sensation. She previously had to pull out of performing at Glastonbury 14 years ago owing to receiving treatment for breast cancer.

Speaking to Sunday Times Style she revealed she absolutely won't be able to keep the tears at bay.

"I'm bound to cry – it's going to happen. When I was meant to be there, I watched from Australia. I was dealing with much bigger things back then, but when I'm there it will take me back to when I wasn’t there. But I’ll work through that."

Fans are excited to see her fully recovered and back where she belongs, up on that stage. And excited for a line up that includes Janelle Monae, Stormzy, Lauryn Hill, Miley Cyrus, and Christine & The Queens.

Although not as potentially excited as festival goers are for what is anticipated to be a nice hot Glastonbury. I know right, mud bath be gone because the Met Office are saying to expect an actual heatwave for the duration of the festival. Which is blessed relief for a festival which is notoriously one of the muddiest around.

Watch Kylie Minogue's performance at Glastonbury on Sunday June 29 on BBC One.