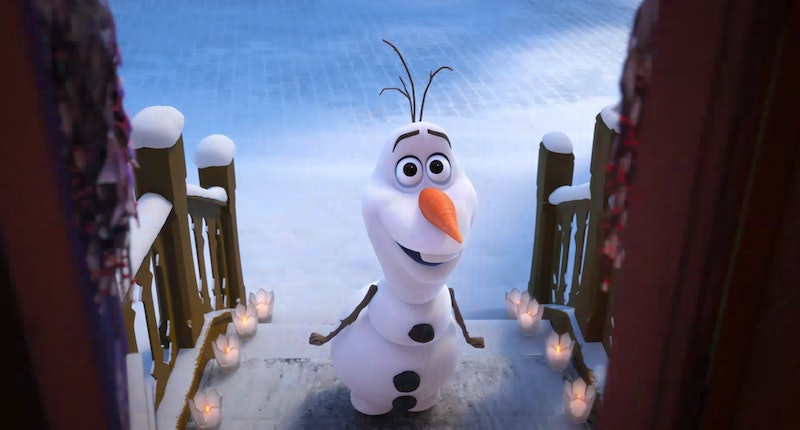 It's Christmas, and you know every word off the Frozen soundtrack by heart, so of course you want to know how to watch the Olaf's Frozen Adventure short. Normally, it wouldn't be so tricky. After all, the 21 minute short comes just before the Disney movie Coco, so watching it would just mean heading to your nearest theater and snapping up a ticket. But, according to Mashable, the Frozen short is being removed from Coco in the wake of viewers complaining that the overly long adventure was shoehorned onto the beginning of another movie. (Bustle has reached out to Disney for comment, but did not receive an immediate response.)

Thus, you reportedly have until Dec. 8 to buy that ticket to Coco, because, from that date onwards, the movie will screen Olaf-free. Of course, according to Entertainment Weekly, Olaf's Frozen Adventure was always meant to have a limited run in theaters, regardless of audience reaction, making the Mashable report somewhat of a dramatic take on what was always planned to happen. As such, presumably the bright sparks behind the short always had a Plan B in place to allow Frozen fans to catch the mini-movie — the most obvious option being for this to be included in ABC's Christmas programming.

After all, according to Vox, Olaf's Frozen Adventure was initially meant to be a holiday television special for ABC (which also explains what they refer to as the "distinct lulls in the action — precisely where the commercial breaks would be placed" ). As such, it's worth following ABC on Twitter or wherever you consume your social media so you'll be the first to know if it's dropping on the channel this festive season. Besides which, there's always the possibility that it might be included on a DVD release of Coco in the extras. So, if you're not able to make it to the cinema over the next few days, fingers crossed you'll be able to view it (and Coco) on DVD from March 2018, which is when dvdreleasedates.com estimates it will drop.

But the limited run is maybe for the best. Judging by the reactions of people on Twitter, few cinema-goers were happy about the move to add what felt like a mini-movie following Olaf on a journey to uncover seasonal traditions from Arendelle onto the front of a full-length feature. Complaints included how confusing this was (with one woman leaving the theater to check she was in the right movie), anger about this being a potential marketing decision "to sell more Olaf toys for Christmas," and concern that Olaf's presence suggested Disney's lack of faith in Coco as a stand-alone movie, describing it as "unnecessary and offensive."

Presumably, people are also mad because the 21 minute duration of the short means it's much longer than the usual Pixar tradition Vox describes of including a short before their movies. According to the Los Angeles Times, Lava, the short which dropped before Inside Out lasted seven minutes, Geri's Game (which dropped before A Bug's Life) is four and half minutes long while Day and Night (which was shown before Toy Story 3) was almost six minutes.

All the same, despite its longer duration, it's still worth watching Olaf's adventure, which Indiewire reports is intended to act as a bridge to the 2018 Frozen film. Kevin Deters, one of the directors of the short, suggested it showcased some important character development, saying, "Olaf is maturing and becoming more self aware and just being a kid at Christmas time, the spectacle of it all helped ground him and realize that he has no traditions or knowledge of what’s going on."

So if you're all about Frozen, it might be worth rearranging your schedule to make that trip to the cinema over the next few days possible. Or to keep an extra-close eye on ABC's festive programming. Yes, it's long — but if you're obsessed with Arendelle, Olaf's Frozen Adventure totally worth watching.