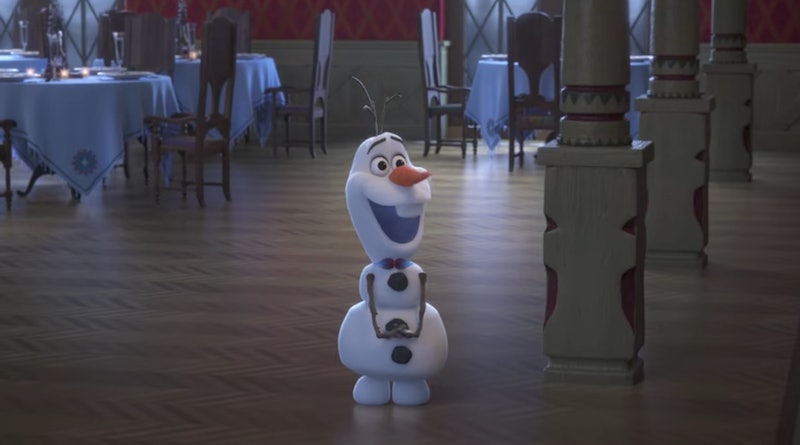 Olaf is back, and he's here to help Elsa and Anna find their holiday tradition in the new Frozen holiday special, Olaf’s Frozen Adventure. The 21-minute special has Olaf reuniting with his favorite sisters for a wintery adventure that will warm our hearts for sure. Elsa and Anna are gearing up to hold their first holiday celebration since they've opened the castle gates to the rest of Arendelle, but they need help figuring out how exactly the two of them celebrate the holidays. Yes, this is Elsa and Anna's first Christmas and they want to do it right.

Good thing they have a snowman like Olaf to help them get in the holiday mood. Not to mention we'll be getting four new songs, which means you can finally let "Let It Go," well, go already. John Lasseter, chief creative officer for Disney and Pixar animation, told Entertainment Weekly that the goal with this Frozen short was to "create a new Christmas standard" with one of these songs, and he thinks the film's songwriters Kate Anderson and Elyssa Samsel did just that. "The song that’s actually in the trailer is ‘When We’re Together,’" Lasseter said. "And it just brings tears to your eyes. It has such great meaning for frankly anybody coming together for the holiday season.”

In the trailer for Olaf's Frozen Adventure it's clear that Elsa feels it's her fault that they don't have any traditions, but Olaf thinks he can find the holiday celebrations that would be the perfect fit for Elsa and Anna. With a little help from Sven, he's on the hunt for holiday fun that may or may not include fruit cakes, homemade candy canes, and decorated trees, which Olaf has an interesting way of describing. "You cut down a tree and then you dress its corpse with candles?" he asks. Yeah, something like that, actually.

The Frozen short, which has Jonathan Groff, returning as Kristoff, will air before Pixar's new feature film, Coco, out in theaters Nov. 22, 2017. Coco, which features an all-Latinx cast, is set in Mexico during the annual Día de Muertos festival and focuses on a 12-year-old boy and aspiring musician named Miguel whose family is not so happy with his musical ambitions.

Unfortunately, fans will have to wait a little longer to see the Frozen sequel, which is slated to hit theaters November 27, 2019. But, it should be worth it, since the movie's producer Peter Del Vecho told Entertainment Weekly back in March that Frozen 2 will change how you think about the first movie. Basically, be prepared to have your minds blown and to definitely learn a little something.

More like this
UK Audiences Will Soon Be Able To Watch 'The Bear'
By Frances Stewart
Twitter Is Overjoyed With 'The Great British Bake Off's Return
By Maxine Harrison
Paul Mescal, Man Of Mystery
By Samantha Leach and Heather Hazzan
12 ’90s Movie References You Missed In 'Do Revenge'
By Radhika Menon
Get Even More From Bustle — Sign Up For The Newsletter