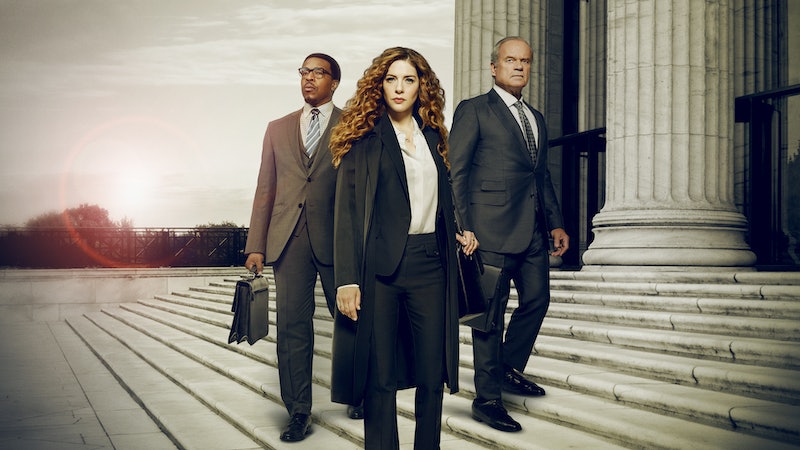 Proven Innocent puts a bit of a righteous spin on the legal dramas you're so used to seeing on TV. It's only just recently premiered on Fox but it's already scored quite a few fans, as it tells the emotional story of a woman trying to get wrongfully convicted people free. You'll be watching it with your heart in your throat — that is, if you do get to watch it at all — since it's not yet made it over here. However, if you were wondering how to watch Proven Innocent in the UK, then you're in some luck.

UK TV news sit, TV Wise, confirmed that Proven Innocent has been acquired by Universal TV, and that a premiere is expected sometime in March. But you might have to try and avoid spoilers for a little while as an exact date is yet to be confirmed. It's a pretty big acquisition and it's reportedly part of a bigger deal between Universal TV's parent company NBCUniversal International Networks and 20th Century Fox Television Distribution, which also handed out rights to the show in Africa.

“We’re delighted that Proven Innocent will be on Universal TV in the UK and Africa,” said David Smyth, Senior Vice President of Sales and UK Managing Director for Twentieth Century, in a press statement. “Viewers are certain to be captivated by this unique new courtroom drama with a standout cast, led by Rachel Lefevre and Kelsey Grammer.”

"Universal TV viewers will be instantly gripped by the strong characters played by Rachelle Lefevre, cast in the role of hero and victim, standing boldly up against hard-as-nails attorney played by award-winning Kelsey Grammer. The subject matter is intriguing and will make exciting TV to watch," added Content Officer for NBCUniversal International, Lee Raftery.

UK viewers might know Kelsey Grammer, who plays the lead role in Proven Innocent, best for playing the titular role in Frasier, a role that was then reprised for Cheers in a spin off episode. Oddly enough, he also provided the voice for classic Simpsons villain Sideshow Bob, and you'll see more of that villainy in action when he comes face to face with Proven Innocent's main lawyer, Madeline Scott.

She's played by Rachelle Lefevre, who you might remember as Victoria from the Twilight saga. She also appeared in Lifetime's Mary Kills People, and before that she played Julia Shumway in the Stephen King TV adaption Under The Dome, and I reckon that her and Grammer really are the dream team.

If you can't wait until March to watch them in action, then you're in luck, as Amazon Prime is currently streaming the series. You can watch individual episodes for $2.99, and if you get really hooked, then you can pay to watch the whole series for the sum of $19.99. I reckon after one episode, you'll be parting with that cash. This courtroom based drama comes with a huge heart, and it's also super gripping. You won't be proven guilty for wanting to stream the whole lot in one go.