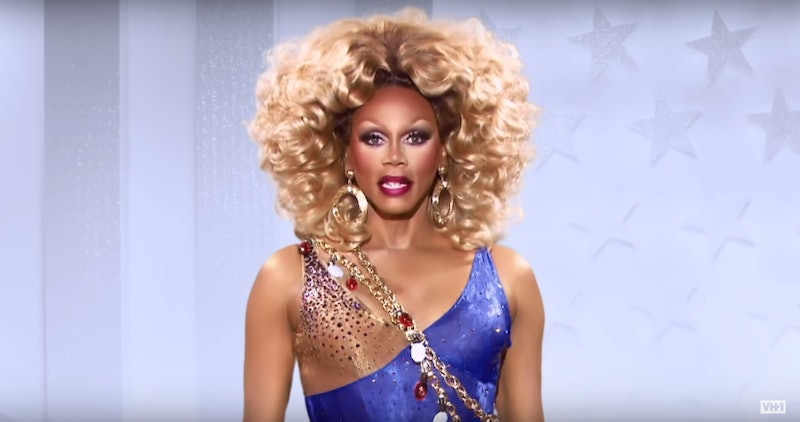 The dust has barely begun to settle on the first ever series of RuPaul's Drag Race UK, however, it's time to start your engines yet again, because the U.S. version of the hit franchise is back for a 12th run. Yes, Mother Ru is returning with a fresh batch of fierce stateside queens, each of whom are set to battle it out in a bid to be crowned America's next drag superstar. So, if you're as thrilled as I am to welcome back the reality TV phenomenon, here's how to watch RuPaul's Drag Race season 12 in the UK.

As the Radio Times reports, the 12th edition of Drag Race will arrive on Friday, Feb. 28 over in the States, and thankfully, fans on this side of the pond won't have to miss out on a second, as brand new episodes will be available to stream on Netflix here in the UK — just one day after the show's original U.S. broadcast.

Fans were previously treated to a first glimpse of the entire RuPaul's Drag Race season 12 cast during a spectacular social media RuVeal. The 13 new queens were introduced in a clip fronted by reigning champ Yvie Oddly, who dramatically announced, "thirteen new candidates await the chance to become America's next Drag Superstar."

Drag Race series 12 also looks set to continue a long tradition of A-list guest stars, which includes the likes of Lady Gaga, Miley Cyrus, and many more. As the Metro reports, rap superstar Nicki Minaj will be the first major name to appear in the new season, and sitting beside Mother Ru herself, will take on the coveted role of special guest judge.

Details of what viewers can expect from the upcoming string of episodes are, as usual, being kept tightly under-wraps. However, veteran RuPaul's Drag Race panelist Ross Matthews revealed to Digital Spy that the show's 12th outing might just be his "favourite season yet." So, it sounds like we're on course for yet another dazzling series, and I can't wait to see what this year's queens bring to the runway.

More like this
5 Biggest Takeaways From Channel 4's 'Untold: Life After Love Island'
By Sophie McEvoy
We’ve Got A Text! Another 'Love Island' Series Is On The Way
By Darshita Goyal
Twitter Can’t Get Enough Of The Romance In 'Ekin-Su & Davide: Homecomings'
By Sophie McEvoy
Meet Jungle Runner-Up Owen Warner's Equally Handsome Brothers
By Sam Ramsden
Get The Very Best Of Bustle/UK

This article was originally published on Jan. 24, 2020