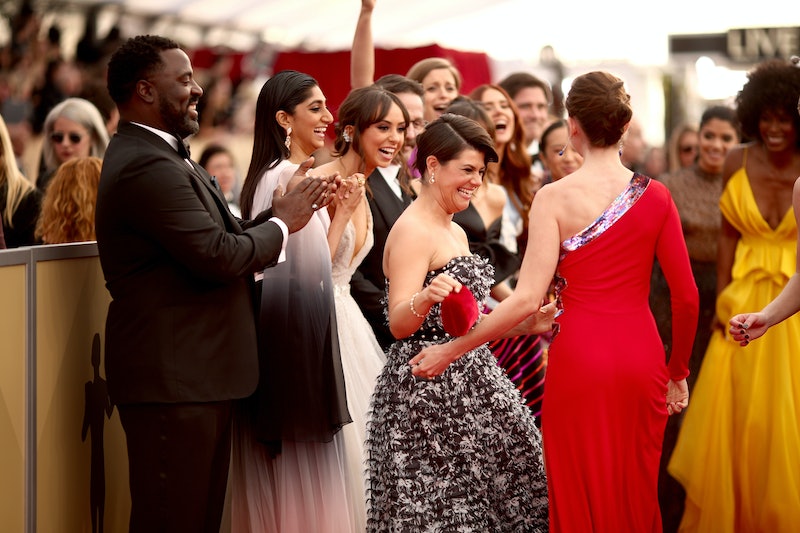 Awards season is coming up, and with it comes a fashion parade down the red carpet. If you're interested in seeing some of your favorite actors clad in designer pieces and dripping in diamonds, then the Screen Actors Guild Awards are next and should be on your calendar. But how can you watch the SAG Awards red carpet? There are plenty of options available on how to catch the event, whether that's through TV or streaming.

We are just a few mere days away from the 25 annual awards ceremony, where the event will take place on Sunday, Jan. 27 at the Shrine Auditorium and Expo Hall in Los Angeles. The awards will air live on both TBS and TNT beginning at 8 p.m. ET/5 p.m. PT., and the official red carpet pre-show will be hosted by People, Entertainment Weekly and TNT, beginning at 5:30 p.m. ET / 2:30 p.m. PT. While it's exciting to see which actors have earned accolades for their powerful performances, it's just as interesting to see what designers have come up with to dress the red carpet.

The first option is to watch it on PeopleTV, which is the free streaming network from People and Entertainment Weekly that lets you watch unlimited, full-length episodes across streaming devices. You can also catch the red carpet on sagawards.org, going straight to the event's website to catch Hollywood's stars mingling before the awards ceremony.

Another place you can catch the SAG Awards pre-show is on tntdrama.com/sag-awards, seeing how TNT is one of the networks that will be airing the awards ceremony. You can also catch the live stream on both PEOPLE.com and EW.com.

If those aren't enough options for you, you can also catch red carpet live streams across multiple social media platforms. For example, you will be able to watch it live on PeopleTV's YouTube channel, allowing you to catch every beauty statement and fashion trend that swans down the red carpet. In addition to that, you will be able to watch live streams on a few different Twitter accounts, including PEOPLE, EW, PeopleTV, TNT, and TBS.

If Facebook is more your thing, you can watch coverage directly on InStyle's Facebook page, or on the Facebook page of PEOPLE, EW, PeopleTV, TNT or TBS.

Celebrating actors' achievements in both film and television, the SAG Awards will be hosted by Will and Grace star Megan Mullally this year, taking over that honor from Kristen Bell, who was the show's first-ever host in 2018.

In addition to that, stars will be walking down a carpet that isn't actually red this year. Sponsored by Reynolds Wrap Aluminum Foil in honor of the show’s 25 anniversary, there will be a special “silver carpet” this time around. Tune in to those streaming options in order to catch all of these exciting moments!