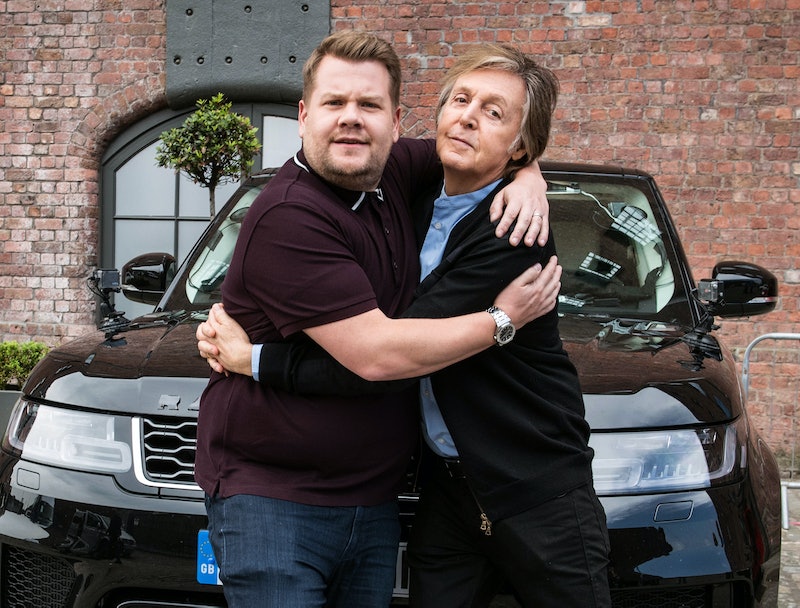 Following on from the success of last year’s UK specials, James Corden is bringing his hit American talk show back to good old Great Britannia. And of course, he's got a star-studded roster of guests lined-up (this guys is friends with everyone and anyone that's famous). Excited? Yep, me too. But if you’re wondering how to watch the Late Late Show With James Corden when it airs, you are not alone. It's not a British show after all, so what channel will get to air it? Have no fear, you've come to the right place if you need answers.

Just like last year, there will be four special episodes which Corden has filmed in London. The first episode will air on Sky1 on Tuesday June 19 at 10pm. The rest of the specials will then continue to air every night this week on Sky1 at the same time. So if you’ve got Sky, rest assured. All you’ll have to do is make sure you switch over to Sky1 when Love Island finishes on ITV2. In other words, make sure you have no social commitments this week.

However, for those who don’t have Sky and simply make do with Freeview channels, the best way to watch the show is to sign up to NOW TV. There, not only can you watch the upcoming UK specials, but all episodes of The Late Late Show’s second and third seasons. It’ll set you back £7.99 a month but there’s a 14 day free trial for those who haven’t set up an account before.

Talking about his decision to bring the show to the UK, Corden told Canoe.com: "It’s a huge amount of effort to take the show to London for a week and try to mount this whole production in Central Hall. I also think that it’s a massive undertaking on a (post-midnight) budget, and we always want to be ambitious and just make the best show for our audience."

He continued: "We have a Crosswalk the Musical shot in London, we’ve got sketches and taped bits. And of course the venue will be vastly different because it’s a 1,000-seat old church. It will look different and sound different, but at the core of it will be the show as we know it."

Earlier this month, Corden released a teaser clip from an upcoming Carpool Karaoke segment starring none other than Sir Paul McCartney — yes, really. And judging by the trailer (in which, by the way, they sing Drive My Car by The Beatles, of course) it might just be the most epic episode of Carpool Karaoke yet. I mean, it's Paul McCartney for crying out loud. And I'm not the only one fangirling — Corden seemed pretty chuffed to have secured The Beatles' front man for his show.

"Here is one where, no matter how hard I try to pinch myself, I can’t quite believe that it’s something we’ve managed to do," Corden told IndieWire. “But manage we have.”

So, how exactly do you go about booking someone like McCartney? Apparently, they had to put their request in five months in advance. "Really it came down to Paul and myself getting on the phone together and me telling him how I envisioned it would do, how we could make it bespoke to him and God bless him, he said, 'Yeah, this is what I’d love to do.' It was a day I’ll never ever forget," Corden added.

Throughout the week, the show will also feature Cher, Cate Blanchett, Orlando Bloom, Foo Fighters, and One Direction star Niall Horan, who will also be performing. Sounds like a right party to me.

It's fair to say that Corden has come a very long way since his days on Gavin & Stacey. From hosting his very own American talk show, to breaking into Hollywood with movies like Peter Rabbit (in which he stars as Peter), Into The Woods, and even the all new star-studded Ocean's 8. Is there anything he can't do?