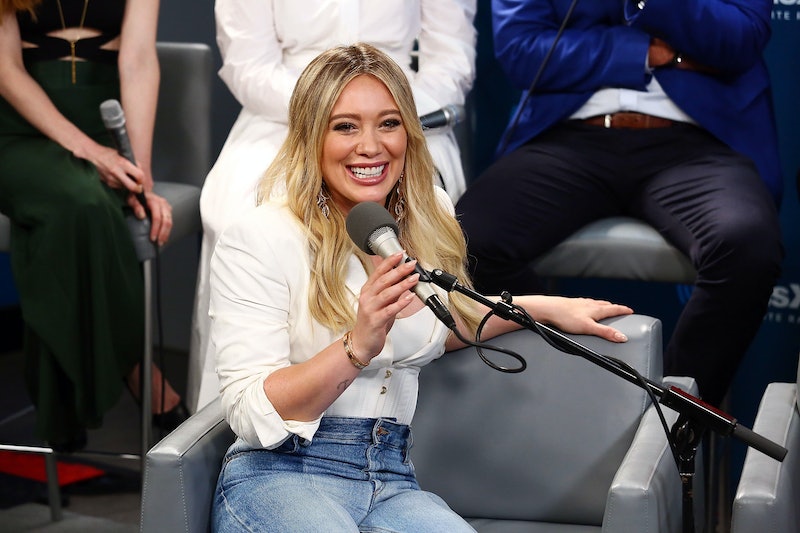 Hey now, Lizzie McGuire is officially getting a reboot, and this announcement is what dreams are made of (see what I did there?). The classic teen sitcom was a major part of many of our childhoods, and thanks to the arrival of Disney's upcoming streaming platform, Hilary Duff will be bringing the iconic character back into our lives. So, if this thrilling announcement has answered your inner-noughties kid prayers, here's how to watch the Lizzie McGuire reboot in the UK.

As reported by The Sun, the Lizzie McGuire reboot will be made available on the forthcoming streaming service, Disney+. However, according to the Express, the Disney streaming platform is yet to receive a UK launch date, so we could have to wait a little while longer before Lizzie McGuire arrives in the UK. I have reached out for comment regarding the Disney+ UK launch date, and will update with any new information once it becomes available.

Delays surrounding the UK release of Disney+ are reportedly linked to licensing issues and programme distribution, however, Disney have confirmed the brand new streaming platform will launch in the U.S., Canada, Netherlands and Australia on November 12 — so, with a bit of luck, Disney+ will be available in the UK later this year.

News of the long-awaited Lizzie McGuire reboot first arrived after Hilary Duff, who famously played the show's lead character, revealed the exciting news on social media. Speaking on Instagram, the actor said, "SURPRISE!!! I’ve been trying to contain this excitement for a loooong time while this has been in the works! I am beyond excited to be home again, back with my girl ...and into her 30’s."

As reported by the Metro, the upcoming revival will focus on the now 30 year-old Lizzie McGuire as she navigates though life as a millennial in New York City. Whilst speaking at the D23 expo convention in Los Angeles, Duff commented on the intimidating experience of bringing the much-loved character back to life. She said, "I’m not gonna lie, I’m a little intimidated. I’m like, 'Where is she in there?' She is in there, she is me. When I was 13, it was such a big part of me…I just have to tap into that and be very authentic to that. Our lives are very different. She’s not a mother, I am already a mother."

The Lizzie McGuire star also revealed that plans for a reboot have been on the back burner for "a couple of years," and said she believes now is "the right time" for the series to make its grand return. During an interview with People Magazine, she said, "The conversations have gone on for a couple of years and the timing just didn’t seem right and now Lizzie is turning 30. For me, she was everybody’s best friend and she was there for us…entering your 30s is a really big deal."

Although no official release date has been confirmed, fans of the original series have a lot to look forward to, and I cannot wait for Lizzie McGuire's epic revival.

More like this
At 28, Lesley Manville Was Acting, Picketing, & Singing Kate Bush Songs
By Olivia-Anne Cleary
Naomi Osaka & Emma Raducanu’s Experiences Have Inspired A New Amazon Show
By El Hunt
A Political Thriller Inspired By The Munich Massacre Is Coming Soon
By Darshita Goyal
Sean Bean’s Wife Starred In Your Favourite Childhood Show
By Sophie McEvoy
Get The Very Best Of Bustle/UK