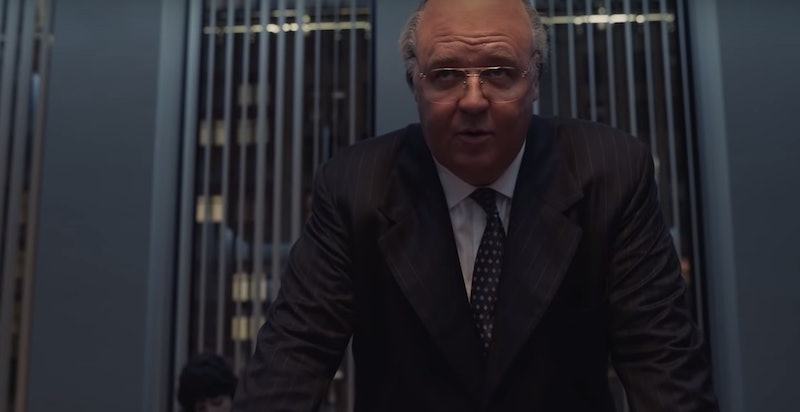 The Loudest Voice is the latest drama to emerge from across the pond, and it tells the story of the influential American television executive, Roger Ailes. Based on a book by author Gabriel Sherman, the series follows Ailes as he builds Fox News from the ground up — a network widely considered to be heavily responsible for the rise of Trump-era politics. The drama also boasts an impressive cast that includes the likes of Russell Crowe, Sienna Miller, and Seth MacFarlane. So, if you're wondering how to watch The Loudest Voice in the UK, here's all the information you need.

Update: Having spoken to representatives at both Showtime and Sky, I have discovered that The Loudest Voice will air on Sky Atlantic in the UK, but a release date is yet to be confirmed.

Previously: According to the Guardian, the series premiered on Showtime in the U.S. on June 30, and a UK air date is yet to be announced. Bustle has reached out to a contact at Showtime to find out if there are any details we can share about a UK release date, and I'll keep you updated if we hear anything back.

The series is based on the bestselling book The Loudest Voice In The Room, reports Variety, and depicts the rise and fall of the Fox News mastermind Roger Ailes. According to Cosmopolitan, actor Naomi Watts stars in the series as the former Fox News host Gretchen Carlson — the woman who accused Ailes of sexual harassment and misconduct following her dismissal from the network, and ultimately brought an end to Ailes' 20-year reign.

During an interview with Variety, Watts opened up about her portrayal of the former Fox News employee, and touched upon Ailes' alleged misuse of power during his time at one of America's largest news outlets. "He was good at…agitating audiences and creating fear," she told the magazine. "His power just went to him. It corrupted that power in a way that he was able to misuse his power, mistreat women, and keep everyone on a certain level of control. And I think there’s just no tolerance for that now. And a large part due to the fact that Gretchen Carlson said, 'No, I’ve had enough,' and had to fight back. She went into that self-preservation mode and was really responsible inadvertently for creating the Me Too movement…When you see one person break the mold it makes it much easier. She created that space."

Due to the inclusion of various real-life figures, the news that Showtime are now facing legal action following the debut of The Loudest Voice shouldn't come as too much of a surprise. As reported by Deadline, the U.S. network is being accused of including "false, misleading and defamatory statements and innuendos and present them as fact in their miniseries." So, it seems the drama is already ruffling a few feathers over in the States, and I cannot wait for its arrival on UK television.