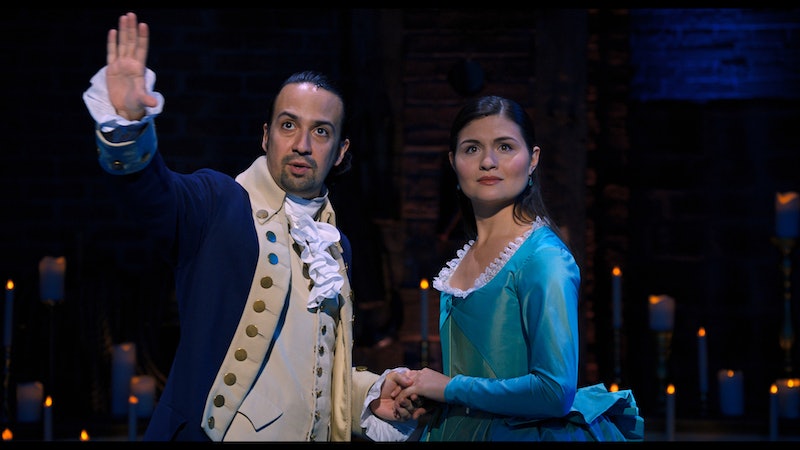 Just in time for Fourth of July weekend, the original Broadway production of Lin-Manuel Miranda's groundbreaking musical Hamilton is coming to Disney+ in its entirety. How lucky we are to be alive right now!

Back in 2016, it was the hottest ticket on Broadway and tickets were nearly impossible to snag. It swept the awards categories that year, as an 11-time-Tony Award®-, GRAMMY Award®-, Olivier Award-, and Pulitzer Prize-winning musical. With Disney+, you can enjoy the best angles of the entire goose bump-inducing musical phenomenon from the comfort of your couch. Just sign up for $6.99/month or $69.99/year and enjoy Hamilton along with tons of other content that spans Disney, Marvel, Star Wars, National Geographic, and so much more.

ICYMI, Hamilton tells the story of Alexander Hamilton, an immigrant and orphan who grew up to be one of America's most accomplished and instrumental founding fathers. The score blends hip-hop, jazz, pop, and R&B in catchy Broadway fashion, putting Lin-Manuel Miranda on the map as one of our generation's greatest musical theater talents. Recorded in 2016 at the legendary Richard Rodgers Theatre in New York, you can see it exactly as it was meant to be seen on Disney+.

In addition to Miranda playing the role of Hamilton, so many members of the standout original cast are in this stage version. Some names you might recognize are: Leslie Odom Jr. as Aaron Burr, Anthony Ramos as John Laurens/Philip Hamilton, Daveed Diggs as Marquis de Lafayette/Thomas Jefferson, Jonathan Groff as King George, Phillipa Soo as Eliza Hamilton, and so many more.

Don't mind me, I'll just be watching this trailer on loop until July 3, when Hamilton hits Disney+.

More like this
Every Disney Fan Must Watch ‘High School Musical: The Musical: The Series’ Season 3
By BDG Studios
Disney+ Has a Nature Docuseries Narrated By Michael B. Jordan
By BDG Studios
All The Sneaky Lindsay Lohan Movie Easter Eggs In Her New Ad, Explained
By Stephanie Topacio Long
The 'Hocus Pocus' Sequel Finally Has A Release Date & It Makes Total Sense
By Shannon Barbour and Radhika Menon
Get Even More From Bustle — Sign Up For The Newsletter