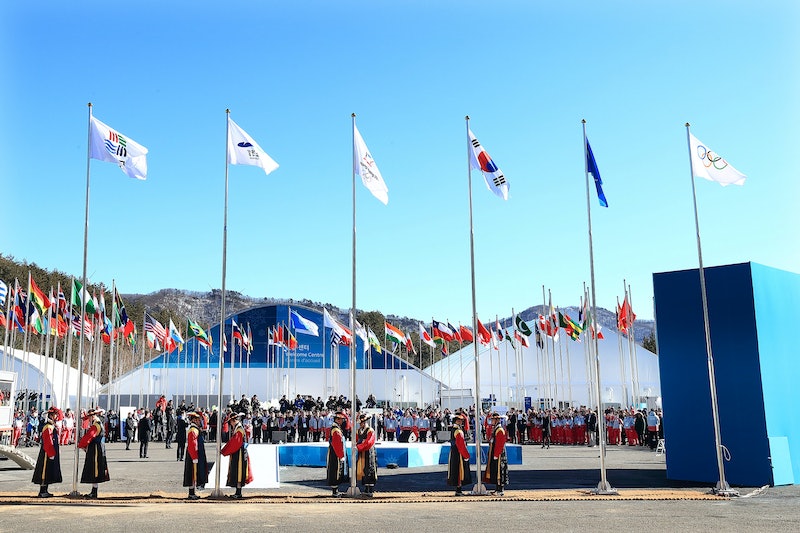 Though most of us have already come down from the hype of the winter Olympics that ended on Feb. 25, it's time to gear up and get excited for the 2018 winter Paralympics in PyeongChang — the international sports competition that brings together and highlights some of the best athletes with disabilities from across the globe. You won't want to miss seeing the 2018 Paralympics, so here is a breakdown on how to watch the Paralympics.

According to the International Paralympic Committee's (IPC) website, the idea of sport competitions for disabled athletes has existed since at least 1888, where a sports club for Deaf people was created in Berlin, but one of the first modern Paralympic competitions was held at the 1948 Olympic games in London. The Paralympics became its own international sporting event just over a decade later, in 1960, when the first official games were held in Rome. Since 1988, the Paralympic games have been held in concurrence with the Olympic games every four years.

Like the Olympics, the upcoming Paralympic games will be held in PyeonChang, and will run from March 9 until March 18. While this past year's winter Olympics featured fifteen different sports, the Paralympics only has six sports — including para ice hockey, para alpine skiing, pare snowboarding, para cross-country skiing, para biathlon, and wheelchair curling. Not to mention, in addition to featuring hardworking athletes competing for gold, the 2018 Paralympics mascot — Bandabi, an Asiatic black bear meant to represent courage and strength — is cute as heck.

As reported by the official website for the PyeongChang 2018 Paralympic Winter Games, there will be 670 athletes from 42 countries competing in this year's games, which is a 24 percent increase in participation than the 2014 Paralympic games held in Sochi, Russia. Not only is overall participation up, but the IPC reported that the 2018 Paralympics will see a 44 percent increase in women athletes competing, which is cool AF. If you needed even more reason to watch into the Paralympics, the organization has strived for gender equity in the games — from improving female participation, to allowing mixed-gender teams to compete.

According to the IPC, an additional 156 hours of the games will be available through streaming. So, if you don't have access to a television, but have a cable or live streaming package that includes NBC, you can watch the Paralympics in real time on your computer at NBC Sports Live. Or, you can even watch live events on your phone through the NBC Sports App.

If you do not have access to NBC's live coverage, or if you are unsure if you'll be able to catch the Paralympics as they're happening, there are other ways to watch the winter games. The Paralympic Games Youtube channel will keep you up-to-date on the latest sporting events, and there are already videos uploaded explaining the six sport competitions. Moreover, the PyeongChang 2018 Paralympic Winter Games's site has a "Watch Paralympics" tab to follow the games in Korea.

Even if you can't watch the winter games live, you can find ways to keep up with the gold medalists online, or on your phone. The 2018 Paralympics will be epic, so don't miss out.