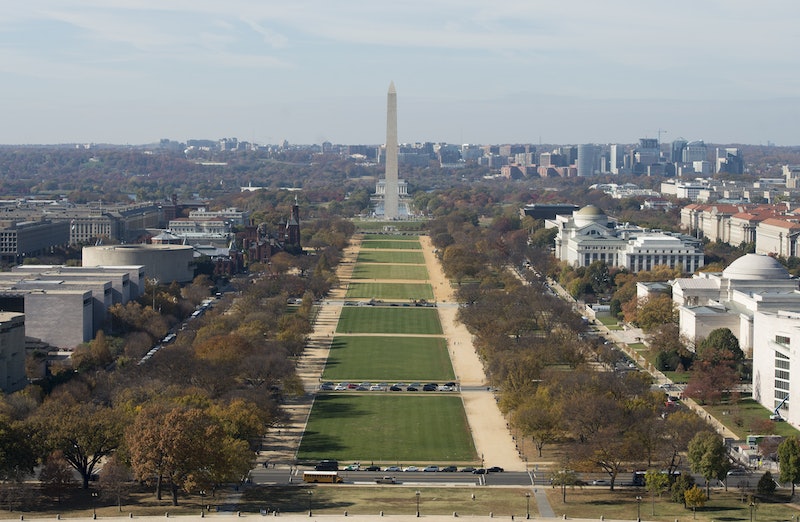 As many know, on Jan. 21, the day after President-elect Donald Trump's inauguration, thousands of people plan to march in Washington D.C. in support of women's rights and inclusivity. If you aren't participating in person, you have a few options to watch the Women's March on Washington from home.

The idea for the Women's March initially stemmed from a Facebook event for a women's advocacy march in response to Trump's election and the views he espoused about women and minorities throughout his campaign. Since then, the initial concept has expanded and changed.

The march now has four official co-chairs as well as local organizers in each state. In the past few weeks, it also partnered with several well-known individuals and organizations in order to further the event's profile and associated expertise. Some of the march's partners include Planned Parenthood, Gloria Steinem, and Harry Belafonte. The event seeks to promote women's rights in solidarity with and alongside all of the intersecting and sometimes oppressed identities shared by individuals.

There are several ways in which you can become involved with and watch the March on Washington, which, according to its Facebook event invitation, currently has 210,000 people indicating they plan on going. On top of that, another 255,000 have indicated that they are interesting in attending.

First, of course, you can plan to watch the event in person in Washington, D.C. It is scheduled to start at 10 a.m. EST on Saturday, Jan. 21 at the intersection of Independence Avenue and Third Street SW, which is near the U.S. Capitol building. A rally featuring "nationally recognized advocates, artists, entertainers, entrepreneurs, and thought leaders," will open the event and continue until 1:15 p.m. EST. Following the rally's conclusion, attendees will begin marching toward The Ellipse, near the Washington Monument.

If you are not located in the District but would like to attend the march, you can of course organize your own transportation or use sites like Ride Vu to organize ride shares and carpools from your city or state. For bus transport, you can use the bus finder on the official Women's March website, or directly seek out private bus services.

Several bus services, like Rally, are selling tickets for buses headed to the march. Bus services, companies, and availability seems to differ from state-to-state though. If you are interested in using this option, your best bet is probably to google "Bus tickets to Women's march on Washington from (insert your state or city here)."

If if neither of those options work, you can also post on the website MarchMarch, which seeks to connect people interested in attending the march with rides and housing.

If you are not able to attend the Women's March on Washington in person, you can also likely still participate in a similar, coinciding march in your state on Jan. 21. There are already marches scheduled in dozens of states, and the national Women's March website updates its list of sister marches regularly.

Finally, if you are unable to go to the Women's March on Washington in person or attend its simultaneous sister marches, the event looks like it is going to be widely covered on mainstream and social media. For example, DemocracyNow! will be conducting a live stream of the march from its website, which you can follow on your computer or mobile device. Furthermore, the march's official website indicated that people interested in live streaming the event should check their website for further details as the march date gets closer.

Of course, you can also find photos and videos from the March as it is occurring on Twitter via the official handle @womensmarch and through using several hashtags, including #WomensMarch, #WhyIMarch, and #IMarchFor. Regardless of whether you attend in person or not, you can also get more directly involved in the conversation about the march by sharing your reactions on your own social media account in real time.

Overall, whichever way you choose to watch the Women's March, you can be sure that you will be witnessing history.