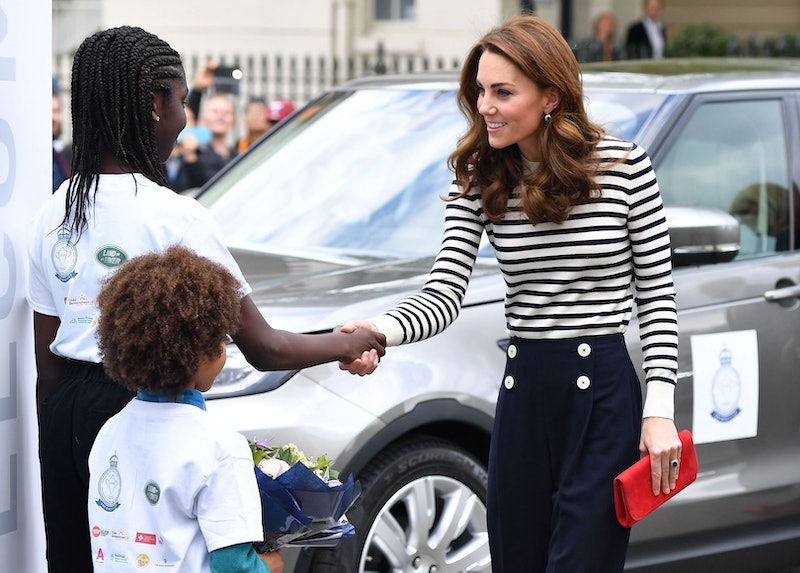 Kate Middleton is a British style icon to a T. Over the years, fans of the Duchess of Cambridge have become obsessed with her chic ensembles, including everything from her casual-wear, to what she puts on for a more formal occasion or royal engagement. And one thing she does particularly well is Breton stripes. She has managed to get so much wear out of the popular pattern, whether it’s with a blazer for a more dressed up feel, or casually with jeans. Here’s how to wear Breton stripes like Kate Middleton.

The Breton stripe was first really 'discovered' by Coco Chanel, who brought the style into the fashion mainstream after incorporating blue and white stripes into her 1917 nautical collection. Her main inspiration? Sailors’ uniforms she saw during a trip to the French Coast. The French Navy had been wearing the style since 1858.

The Breton stripe has since been a staple of many women’s wardrobes, and it suits pretty much every occasion and style. It’s now easier than ever to buy a Breton, and you can get your hands on all sorts of colour combinations, widths, and sleeve lengths to suit your taste.

Kate Middleton has always done Breton stripes well, so I thought I’d take a deep dive into her outfit archives for some inspo on how to style the look.

Breton stripes, while great for casual attire, are easily dressed up for more formal occasions, too. Kate often reaches for a Breton when she wants to go smart-casual. Here she's paired the top with some navy wide leg trousers and a pair of block heel court shoes.

Wondering what to wear today around the house or to pop out for a walk? A Breton tee is easy to throw on, and looks good on everyone. Pair it with some blue skinny jeans like Kate.

Paired with a blazer

Another way to formalise a Breton stripe, The Duchess loves to pair hers with a smart blazer. The jacket really adds a more dressed up feel to an otherwise casual look. She likes to wear this ensemble with espadrille wedges for an extra edge, too.

Breton tops are usually blue and white, but you don't always have to opt for a deep, moody blue hue. Kate proves a pale blue piece looks just as cool, particularly for Spring or Summer time.

Mix up the colours

Breton tops usually come in navy blue and white, but don't be fooled; you can totally mix up the colours and stripe widths to do something a little different. Kate is a big fan of a white, blue, and red mix.