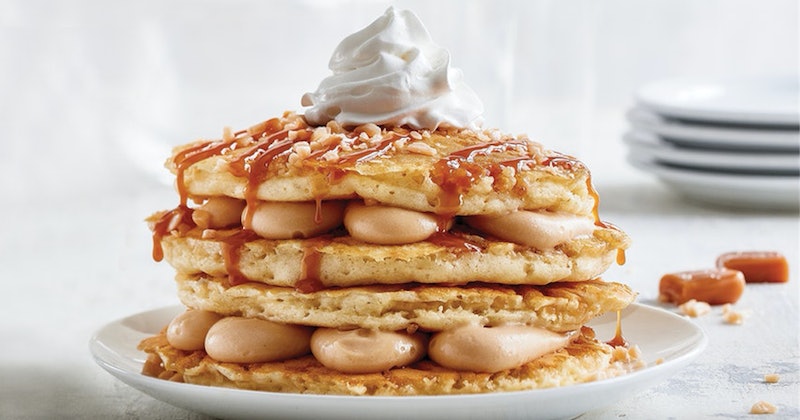 Pancakes are love. Pancakes are life. And if you’ve been pondering exactly how you can win free IHOP for a year, good news: The IHOP International Passport Challenge is here to make that dream come true. Praise be to the mighty pantheon of breakfast deities!

The International Passport Challenge was created to celebrate IHOP’s 60th anniversary. The very first restaurant opened as the International House of Pancakes in Toluca Lake, Calif. — a suburb of Los Angeles — in 1958; franchising came along in 1960, and in 1973, the acronym “IHOP” was put into use. And now, in honor of its 60 years in operation, the chain has given us the opportunity to win whole bunch of free pancakes. To enter, all you have to do is… eat some pancakes between now and June 10, 2018.

Those who wish to undertake the International Passport Challenge in order to enter for the chance to win free breakfast for a year will have to fill up a "pancake passport" in the IHOP mobile app with three new pancake types that have been introduced to the menu in honor of the chain’s 60th birthday. Dubbed the “International Pancake” menu, the trio consists of Mexican Tres Leches Pancakes, Belgian Dark Chocolate Mousse Pancakes, and English Sticky Toffee Pancakes. The Mexican Tres Leches option consists of four buttermilk pancakes layered with vanilla sauce, then topped with more vanilla sauce and a drizzle of dulce de leche; the Belgian Dark Chocolate Mousse Pancakes are chocolate through and through, with four chocolate pancakes getting filled with chocolate chips, layered with Belgian dark chocolate mousse, and then topped with more mousse and more chocolate chips; and the English Sticky Toffee option fills four buttermilk pancakes with English toffee, layers them with salted toffee mousse, and tops them with salted caramel sauce and more toffee.

And, as it turns out, there are actually two kinds of prizes that will be awarded throughout the contest. The grand prize, of course, is the whole “free breakfast for a year” thing; that one is delivered in the form of 78 gift cards to IHOP worth $50 each for an approximate retail value of $3,900. IHOP’s fancy pancakes (the ones beyond a standard full or short stack — I’m talking about the ones with names like “Cupcake Pancakes” and “Double Blueberry Pancakes” here) are about $8 a pop, so the grand prize is enough to buy around 487 orders of pancakes. That’s literally more than one pancake order per day for 365 days, so, I mean, hey, if you win, you’ll be able to treat your favorite people to breakfast every so often, too!

The second prize is a bit less spectacular than $3,900 worth of breakfast; however, there are multiple chances to win it, so at least there’s that: Once a week between now and the middle of June, one entrant will be randomly chosen to win a $25 IHOP gift card. There are 13 of these suckers up for grabs — and it’s still enough to buy three orders of $8 pancakes, to boot. That, as they say, is not nothin’.

The winners of the 13 weekly drawings will be announced according to the schedule laid out here; the grand prize winner, meanwhile, will be announced sometime on or around June 14, 2018. If you win, you’ll be notified by email, mail, and/or telephone — but know that there’s only one entry allowed per person, so don’t try to game the system.

The full rules to the sweepstakes can be found here. For the curious, here’s how to throw your proverbial hat in the syrup-soaked ring:

More like this
Starbucks Released New Menu Items For The Summer
By Emma Garza
A Beginner's Guide To Drinking Whiskey
By Alexis Morillo
How To Make The Watermelon, Feta, & Mint Salad Trending On TikTok
By Emma Garza
How to Delete (or Pause) Your Hinge Account
By Emma Carey
Get Even More From Bustle — Sign Up For The Newsletter