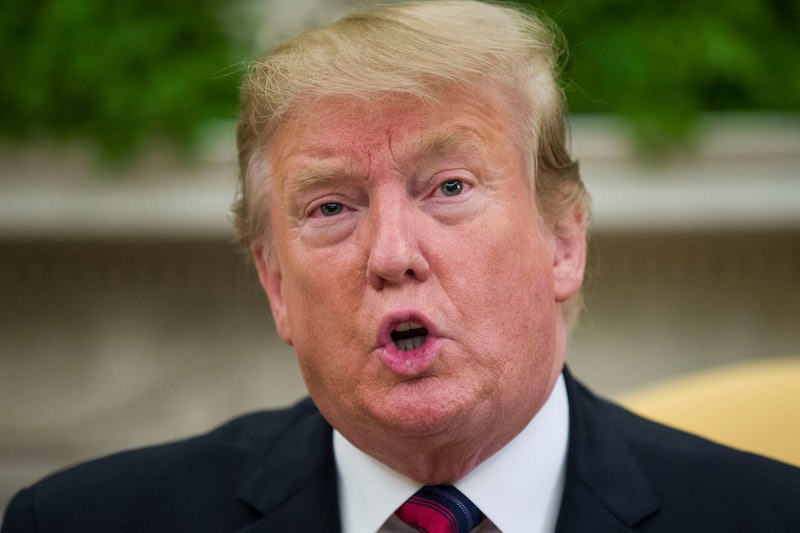 Alex Brandon/AP/Shutterstock
By Monica Busch
May 28, 2019

As the president's trade war with China escalates, reports indicate that Americans may suffer some serious consequences. Earlier this month, the Trump administration announced it was banning the sale of products made by Huawei Technologies Co. Ltd, the largest telecommunications equipment maker in the world. But Trump's Huawei ban could cut cell service in rural areas, or in some cases eliminate it altogether, NBC News reports, leaving hundreds of thousands of people without a way to connect.

The Trump administration has said the ban stems from national security concerns, and has accused Huawei of acting on behalf of the Chinese government, according to The New York Times. In order to do business with Huawei in the United States, companies will need to seek approval from the Commerce Department's Bureau of Industry and Security.

"This will prevent American technology from being used by foreign owned entities in ways that potentially undermine U.S. national security or foreign policy interests,” Commerce Secretary Wilbur Ross said in a statement, according to NBC News.

The Times reports that many rural cell service providers rely on Huawei equipment, though, since it's sold at a significantly cheaper rate compared to its competitors. Alternative equipment providers based in Europe sell their products at much higher prices. The China-based company maintains that banning it from U.S. markets will only serve to hurt Americans.

“Restricting Huawei from doing business in the U.S. will not make the U.S. more secure or stronger,” Huawei said in a statement provided to the Times. “Instead, this will only serve to limit the U.S. to inferior yet more expensive alternatives.”

It should go without saying that rural service providers are incredibly important. They fill coverage gaps in places where larger telecom companies don't operate, and service hundreds of thousands of Americans who live there. Replacing their Huawei equipment with technology made by approved companies could be debilitatingly expensive for those local companies, according to NBC News.

The Rural Wireless Association, a trade association representing carriers with fewer than 100,000 subscribers, told the news outlet that it could cost upward of $1 billion to foot the changeover cost for a dozen companies. There is a bill in the Senate that would provide about $700 million in relief for affected companies, according to NBC News.

"We believe that it is important that networks are secure not just in urban areas, but in rural areas as well,” the Federal Communications Commission (FCC) said in a statement provided to the Times. “There are currently many rural broadband providers that use equipment that does not pose a national security risk.”

Mike Kilgore, the chief executive of Nemont, a small telecom company in Montana, told the Times that if he is forced to spend an estimated $50 million replacing his equipment in order to comply with the Trump administration's ban, he may have to close up shop (Kilgore is also the president of the the Rural Wireless Association). If Nemont does shut down, the Times reports, that could leave all of the company's customers without service.

"If they can't use Huawei equipment, it's going to cost even more without a significant infusion — and $700 million ain't the answer," Gigi Sohn, who worked as a counselor to the FCC chairman under President Obama, told NBC News. "These rural areas are going to not get served, and it puzzles me why these senators, many of whom are from states that are almost entirely rural, don't see the problem here."