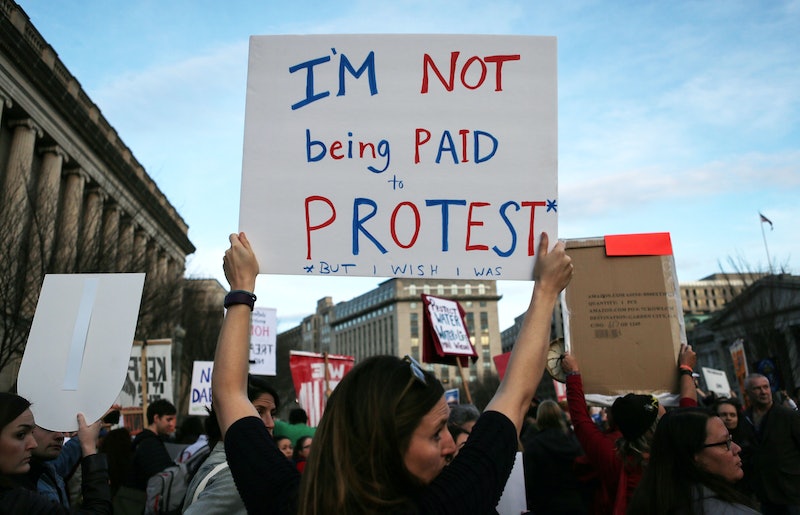 Since his inauguration just under three weeks ago, Donald Trump has faced unprecedented protests and public outcry in the form of marches and demonstrations around the country. But of course, just showing up and making noise isn't enough to change policy when the Republican Party joins Trump in controlling not only the presidency, but both houses of Congress. Marching in public squares won't be enough to change the country by itself.

On Wednesday night, we saw the beginning of a kind of action that can make the implementation of Trump's agenda a little more difficult. In Phoenix, Arizona, protesters showed up and tried to block the deportation of an undocumented woman who had lived in the United States for 21 years — an actual physical action being taken due to a Trump administration executive order. They were unsuccessful in halting it, but by displaying the difficulty that will come with some of Trump's most controversial actions, Wednesday night shows the sharp tip of the thorn in Trump's side.

Guadalupe Garcia de Royas came to America from Mexico when she was just 14 years old and has lived here since. She has two children, both born and raised in the United States. She did not fit into the definition of a criminal alien that the Obama administration used to prioritize deportation — she had been arrested in a raid in 2008 for using a fake social security number to work without authorization, but had not been involved in serious criminal activity. She was forced to check in periodically at Immigration and Customs Enforcement offices. When she checked in Wednesday, she was detained, in accordance with President Trump's executive order which broadened the meaning of "criminal" aliens.

Residents of Phoenix showed up to make her deportation as difficult as possible:

Protesters couldn't stop Garcia's deportation. By Thursday morning, Garcia had been sent to Mexico, a country she hadn't been to in decades. But the actions of protesters in Phoenix show how difficult mass deportation of illegal immigrants will be.

Nonviolent resistance requires more than simple protests, or even boycotts, to have an impact. With undocumented immigrants most in danger of being harmed by Trump policies, it will fall to those not threatened to put themselves on the line.

It is likely impossible for these activists to stop ICE from functioning completely. But this kind of action makes the cost of complying with Trump's deportation orders that much higher. If every deportation of a non-criminal alien faces these kinds of roadblocks, it will make Trump's "deportation force" a nearly impossible proposition.

Protests and marches are a great way for resistance movements to show their force and get organized, but the real change doesn't come from visuals of resistance. Rather, it comes from real, concrete steps that impede Trump's actions. Last week, Erica Chenoweth, an expert in nonviolent movements explained the power of nonviolent resistance to me:

It's not really about making Trump change his mind about things. It's about other people — whether they're Congresspeople, civil servants, economic elites, or others who are required to cooperate. It's making them not cooperate.

If Trump's opponents want to stop him from implementing an agenda they hate, they have to find ways to really stop its implementation. If people want to stop deportations, they need to not only raise awareness of the issue, but make the actual act of deportation too difficult to continue.