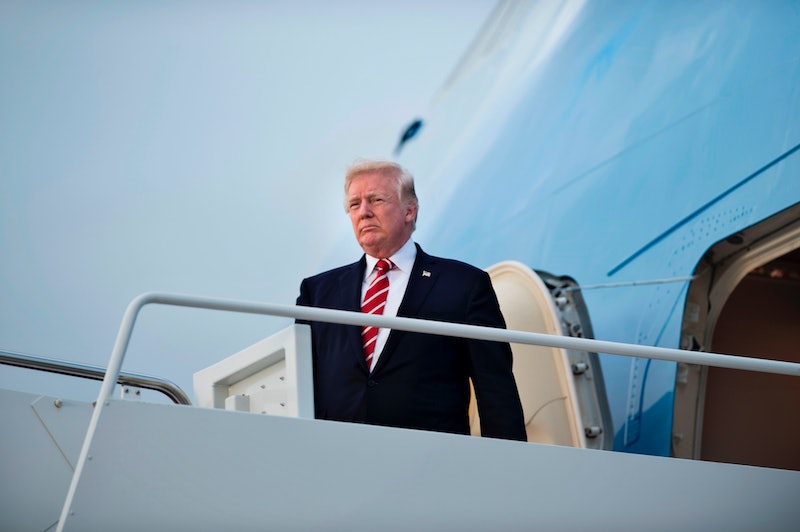 The controversy surrounding Columbus Day is nothing new. With the number of places now choosing to recognize Indigenous People's Day either alongside or instead of Columbus Day, it seems difficult to imagine that anyone could view Columbus Day as a holiday without an asterisk. However, Trump's Columbus Day pronouncement hearkens back to a time before Columbus' legacy was at all in question, to a time when Columbus was unquestioningly viewed as a hero.

In doing that, he also attempts to silence or gloss over all of the voices asking for recognition that Columbus' legacy didn't only begin a new era for Europe — it also effectively marked the beginning of the end of the flourishing societies that already existed in the New World before Europeans arrived. Columbus and the proceeding waves of Europeans who came over, of course, didn't only come over to explore a previously undiscovered land; they came to plunder, bringing back riches and slaves and unknowingly seeding the land with diseases that would wipe out many millions of people.

"The permanent arrival of Europeans to the Americas was a transformative event that undeniably and fundamentally changed the course of human history and set the stage for the development of our great Nation," the pronouncement says, and there's little to argue with here. The voyage did alter the course of history, and without it the U.S. would not exist in the form that we know — that is, a nation founded by immigrants from Europe.

"Therefore, on Columbus Day," the statement goes on, "We honor the skilled navigator and man of faith, whose courageous feat brought together continents and has inspired countless others to pursue their dreams and convictions." Again, there's nothing here to directly contradict, but the problem is what it leaves out. The result of bringing the two continents together was a whole new phase of development and expansion for the European countries, which began claiming colonies left and right and enriching themselves mightily in the process. At the same time, of course, it was literally world-ending for the diverse peoples who already lived in the areas that would become those colonies.

That second thing — and the consequences of it that are still constantly reverberating through American society for the people of color who are fighting for equality — is what Indigenous Peoples Day brings up, and it's been getting more and more recognition every year. It's a difficult history to reckon with, of course, but the world is littered with contested histories. Trump isn't only avoiding delving into contested history with this, however. He's throwing a bone to the people who feel that Columbus' part in history doesn't have a dark side at all. The hashtag "NeverApologize" is trending on Twitter, with user after user stating their beliefs that European Americans are the ones who built the nation, and that this heritage doesn't require any apologies to be made for the people pushed aside during the nation's foundation.

These people appreciate Trump's statement, and many of them are echoing the words of the white supremacists about European heritage and the place of white people in America. Trump, let's remember, wouldn't initially explicitly condemn white supremacy after the violent rally in August, and then even after he did, he made another statement blaming the violence on both sides. This went over well in the white supremacist sphere, which thinks that Trump is a president who represents their own ideals. A statement like this, on a holiday that has been so fraught in recent years and after he didn't condemn another white supremacist rally in Charlottesville, offers yet more proof of this position.

It would have been an easy thing to insert some language recognizing the consequences of Columbus' arrival for indigenous people, which President Obama did in his previous Columbus Day statements. Similarly, it would have been easy to condemn the latest white supremacist rally in no uncertain terms — but Trump didn't do either of those things. Whether or not he and his team mean it explicitly endorse the wave of outward racism that the country is now dealing with, the people behind that wave are going to understand it as such.