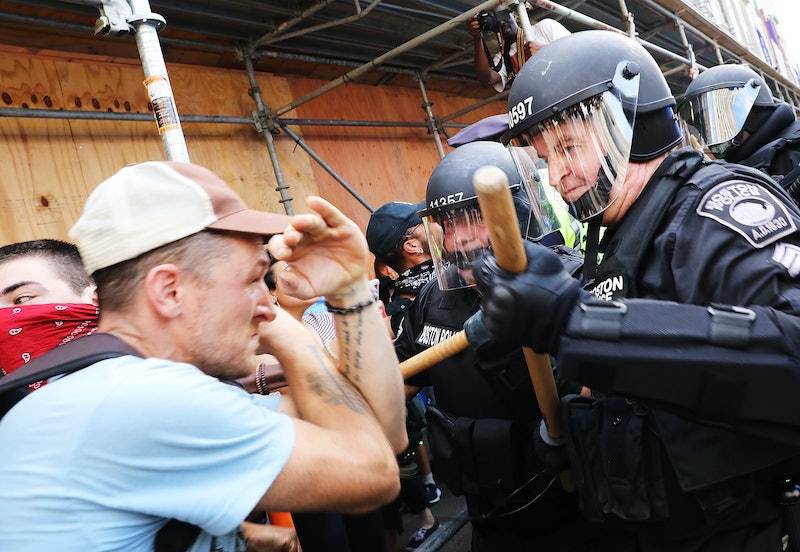 On Saturday, white supremacists returned to Charlottesville, VA for a second "Unite The Right" rally — less than two months after the first gathering resulted in the death of 32-year-old counter-protestor Heather Heyer in August. Although the latest rally was brief, and by all accounts non-violent, the white nationalists who attended joined in various anti-Semitic chants and promised to "keep coming back." Still, in the hours since the rally ended, President Trump has not yet condemned the Charlottesville alt-right rally, even though he has taken the time to criticize a Republican Senator on Twitter.

In a morning tweetstorm, Trump lambasted Senator Bob Corker for being a "negative voice" after the Tennessee Republican criticized the President earlier this week.

"Senator Bob Corker "begged" me to endorse him for re-election in Tennessee. I said "NO" and he dropped out (said he could not win without)," Trump said about the Senator, who announced last month that he will not seek re-election in 2018. Trump added that Corker "didn't have the guts to run!"

These comments come as the Charlottesville community is still recovering from the second major white nationalist rally held in the small college town in the past three months. Dozens of protestors, led by notable white supremacist Richard Spencer, marched with tiki torches near the site of a covered statue of Confederate general Robert E. Lee while chanting, "The South will rise again," and "“You will not replace us."

Spencer also warned that the country is "going to have to get used to white identity," suggesting that more alt-right rallies will take place in the coming months.

Given that the first Unite the Right rally, held on Aug. 11, turned deadly when a white supremacist rammed his car into a crowd of peaceful counter-protestors, killing one woman and injuring dozens more, it's understandable that Spencer's comments could be seen by many as an attempt to incite more violence. Trump, however, has not yet expressed concern, and unfortunately, his silence does not differ from his delayed response to the first Unite the Right rally.

In August, Trump waited a full day to comment on the initial alt-right rally in Charlottesville, even as local legislators prepared to declare a state of emergency due to reports of violence and aggression. After Heyer was killed during the second day of protests, Trump faced widespread backlash for failing to name white supremacists as the reason for her death, instead suggesting that "many sides" were to blame.

Trump's refusal to condemn white supremacists following Heyer's death caused many to be concerned that Trump might be emboldening other neo-Nazi groups to plan similar rallies, and as a result, similar acts of violence. Former KKK Grand Wizard David Duke even thanked the President for the "honesty and courage" of his response.

Still, even after having a second opportunity to condemn racism and white supremacy, Trump has clearly not found it necessary to do so, and has not yet provided a response to yet another white nationalist rally in Virginia as of Saturday afternoon.

Given the amount of backlash and negative press Trump received — from both sides of the aisle — after his first botched Charlottesville response in August, it's pretty safe to assume that he'll eventually have to speak up about Saturday's alt-right rally — even if he'd rather be dueling with an outgoing U.S. Senator.