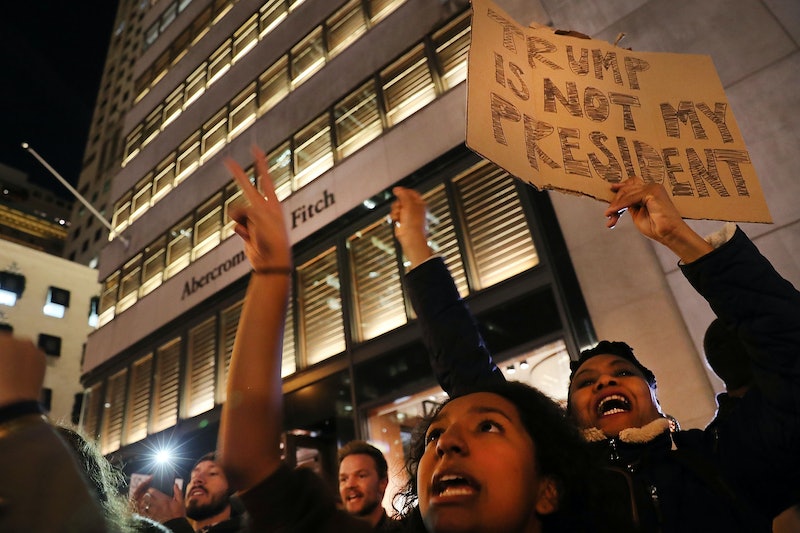 Life for college students typically involves some level of stress, but a recent report revealed that U.S. politics may be significantly contributing to it. Indeed, a new study looked at how Trump's election affected college students and found some pretty shocking results. It turns out that some students experienced post-traumatic stress-like symptoms following the 2016 race.

Melissa Hagan, a psychology professor at San Francisco State University, conducted the study along with a team of researchers and published it in the Journal of American College Health on Oct. 22. As Science Daily reported, Hagan said her study centered around the research question, "Did the election for some people constitute a traumatic experience?"

Hagan's research was conducted in January and February 2017 and involved surveying 769 students in psychology classes at Arizona State University. Hagan said via Science Daily that students were given surveys that "gauge the extent to which individuals have been impacted by an event [the 2016 election] in such a way that it might lead to diagnosable post-traumatic stress disorder." After examining the results, Hagan found that one in four of the students surveyed had "clinically significant" levels of stress. The study also noted that, when measured, this level of stress was similar to that of mass shooting witnesses seven months after a shooting.

Hagan's study also revealed that some people were more strongly affected by the election than others. For example, as Newsweek described, minority students had higher stress scores than did white college students. Women also scored 45 percent higher on the stress assessment than men. Democrats and non-Christians scored higher than Republicans and Christians, respectively.

Science Daily noted that the stressful nature of the election was likely due to the divisive rhetoric of the campaign along with the relative surprise of Trump being elected president over Hillary Clinton. "There was a lot of discourse around race, identity and what makes a valuable American. I think that really heightened stress for a lot of people," Hagan said via the outlet.

Lindsay Till Hoyt, a professor who co-authored a different study on young adults' reactions to the election, told CNN that she found Hagan's findings unsurprising and echoed similar sentiments about divisiveness:

I think so much of the social media and news about the election really felt personal and aimed at specific groups like Mexican Americans and women. ... Because there was literal name-calling going on in the election cycle, even with students less politically engaged, that strong language and the harsher crassness of the rhetoric may have had a more broad effect on these students.

While the study offered some eye-opening findings, it also had several limitations. As CNN described, it only examined reactions to the 2016 presidential election and thus did not allow for comparison among elections. The study also could not control for other potential environmental stressors on students. Moreover, since the students only took the survey once, the study did not offer a long-term examination of how the election impacted students' psychological health.

Despite these limitations, the study's researchers indicated that they hope their findings will improve the mental health care that college students receive, as CNN noted. Science Daily explained this means that those who counsel college students should consider that the political environment may be impacting stress levels, along with other elements of college life.