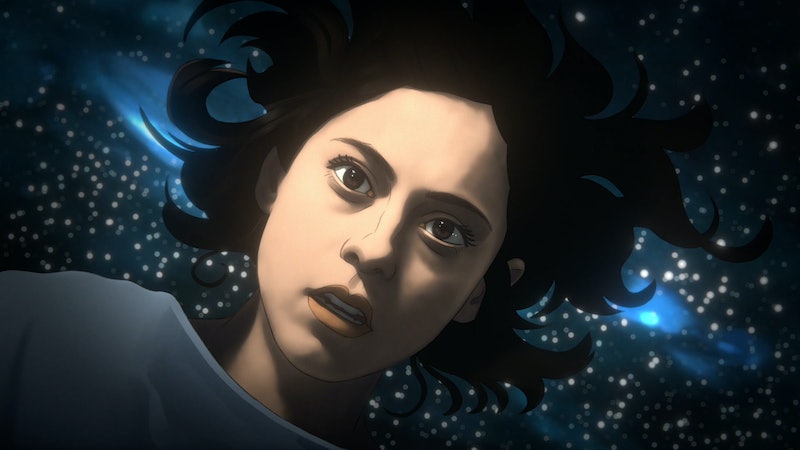 The first time Undone creator Kate Purdy got a glimpse of her own brain ventricles was in college, in a CAT scan for viral meningitis. They were enlarged, the doctor explained, but it wasn't a big deal: Some people have big noses, and others have big brain ventricles. It wasn't until she read an article about a study that linked large brain ventricles to schizophrenia that she began to worry. Schizophrenia was in her family; her grandmother Geraldine had it. The article said that if women don’t develop it by the time they’re 30, they usually won’t. She started counting down the days until her 30th birthday, hoping that she'd cross the threshold and be in the clear. Could she really lose her mind, and if so, what would that actually feel like?

A few years later, she experienced a mental break and found out. "I didn't know what was happening to me, I didn't know how to move out of it or what to do," Purdy recalls to Bustle of being in the throes of serious depression and anxiety. When we meet the protagonist of her new Amazon TV series Undone, she's in a similar position, though her experience is perhaps a bit more cinematic. Alma, played by Alita: Battle Angel's Rosa Salazar, has big brain ventricles, too, as her father Jacob (Bob Odenkirk) tells her in one of her many PTSD-induced hallucinations. After enduring severe head trauma from a car crash, her dead dad keeps popping up everywhere, imploring her to solve the mystery of his death.

His offer is enticing: What if there are multiple realities, and Alma can travel back in time to save him from his death? What if this is the purpose that has been missing from her normal, uninspiring life? Or, what if her family history of schizophrenia — her grandmother Geraldine (sound familiar?) had the disorder — means that this is all a hyper-real figment of her imagination, the result of those large ventricles going haywire?

Alma is far from the first protagonist to question the nature of her reality (see: The Matrix, Split, Legion, etc.), something that Purdy and her Undone co-creator Raphael Bob-Waksberg (BoJack Horseman) acknowledge. But Undone offers a tweak to that common trope of superpowers masquerading to the outside world as mental illness by treating Alma's anguish as she questions what's happening to her with an impartial pathos for her situation.

"Usually there’s a very quick journey from, Hey, everything you thought about the way the world works is wrong and all of your lived experience is not true and you can’t trust anything anybody’s ever said before, [to] OK, well, guess I’m a superhero now," Bob-Waksberg says. "I just felt like, if this were to happen in the real world, that you were visited by somebody or given some sort of power or perceived the world in a brand new way, I think your first reaction for a very long time would be to question it, and be like, This goes against everything I thought I understood about how the world works, I’m not just gonna jump on board and be like, OK, I guess this is it now."

"Yes, it’s a mental break and mental illness, but you can also call it incredible healing, or the potential for healing."

It's never clear if Alma really does have powers propelling her toward completing an extraordinary mission, or if this visually dazzling animated series is simply the manifestation of symptoms of her mental illness. Perhaps, Undone seems to posit, it depends on which way you choose to look at it. The point is that you're right there in the moment with Alma, figuring it out. The result is a mind-bending series that's part mystery, part heady existential drama, with a sprinkling of comedy on top ("What's sexier than big pockets of fluid?" Alma smirks upon learning about those big ventricles).

Undone's hybrid of narrative styles is elevated by its eye-popping animation, which is the result of rotoscoping, a technique in which artists draw over footage shot with real actors. Rather than use a combination of live-action and CGI to constantly bend the real world to the whims of Alma's visions, Purdy says she and Bob-Waksberg were looking for a way to convey "a continuum of reality," and trippy effects would blend more seamlessly into scenes already stylized by the rotoscoping. By animating actors' real performances, Purdy and Bob-Waksberg could preserve both the uncanny aesthetic feel of the animation and the chemistry between real people acting in a room together.

It makes for an engrossing viewing experience that's at turns pulse-pounding and moving, and sometimes both at once. And for Purdy, exploring the nature of reality through the conduit of Alma has allowed her a space to re-contextualize how viewers think about mental illness.

"Yes, it’s a mental break and mental illness, but you can also call it incredible healing, or the potential for healing," she says. Purdy eventually found healing for herself through a combination of psychiatry and Ayurveda, a traditional healing practice from India, and she notes as Odenkirk's Jacob does in the series that plenty of shamanistic and indigenous traditions view mental health differently than we do traditionally in the West. In some cultures, for example, hallucinations are considered powerful and valuable visions, not signs of life-threatening madness.

Viewed that way, perhaps Alma's visions of her dead father aren't disturbing signs of a woman losing her mind, but "an ancestor reaching through to shake you out of your reality," Purdy explains, "so that you make choices that are better for you, and better for the people you love." It's impossible to know for sure, but the beauty of the world of Undone is that the only thing we know for certain is that the answer is always going to be complicated.