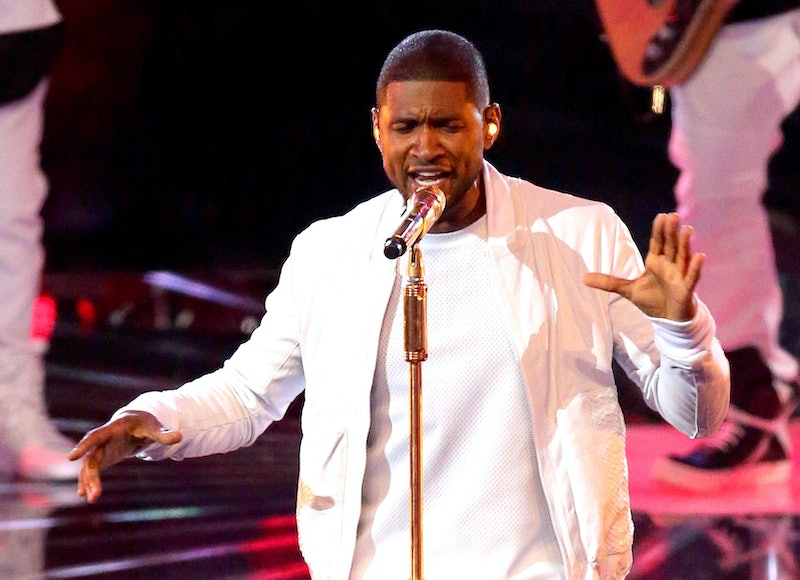 In the video for Usher’s “Confessions Pt. II”, the scandalous single from his seminal 2004 album Confessions, the singer stands half naked in front of a mirror that, seemingly out of nowhere, crumbles to shards in front of him. The song’s whimpering guitar riff bleeds through the harsh crash of the glass, as Usher’s reflection splinters before our eyes. The message is clear: forget all you think you know about him, because after this record, nothing will be the same. That may sound like hyperbole, but it actually was the truth; 15 years after the release of Confessions, it's evident that the album truly did change everything when it came to both Usher's career and many R&B hits that'd follow in the years to come.

In the time before Confessions, Usher had already established himself as a triple threat. His 1994 self-titled debut showcased his voice; he honed his dancing skills in the videos accompanying his breakthrough 1997 album, My Way; and he established himself as an actor in the years that followed, with roles on the sitcom Moesha and the '90s teen cult classic film She’s All That. He was already on a strong upward trajectory,  but Confessions was the catalyst that propelled him to superstardom. From its gossip-based marketing techniques to its tremendous commercial success to the fresh sounds of its R&B songs, the album, which was released on March 23, 2004, forever altered the music landscape. On its 15th anniversary, here's a look back at how it all went down.

This album, with its candid tales of infidelity and relationship regrets, dismantled Usher's benign, boy-next-door image and let fans see a new level of darkness from him. "Confessions Pt. II" painted Usher as a repentant cheater, remorseful after impregnating his mistress. "Burn" was a love letter to an old flame. "Throwback" was an apology note that, thanks to Usher's then-recent break-up with TLC singer Rozonda "Chilli" Thomas, seemed to ring especially true.

Chilli claimed later on that the songs were actually about producer Jermaine Dupri's life, not Usher's, but the fact that Usher sang them still had a big impact in his public image. Even though releasing these darker songs risked tearing apart his fanbase, the artist chose to step away from his former squeaky clean persona by singing about flaws. In other words, Confessions helped Usher pivot from teen idol to bad boy.

It Introduced A Brand-New Beat

As Usher switched up his image, he also revamped his sound. He enlisted a bevy of producers, from veterans like Dupri and Jimmy Jam & Terry Lewis, to hip-hop impresarios like Just Blaze and Lil' Jon, to create a fresh sonic backdrop for Confessions. In the process, birthed a fresh sound in R&B that still echoes in today’s music.

As Vibe reports, legend has it that Usher had his reservations about “Yeah!,” the crunk-infused club banger that would become the album’s lead single. At the time, Lil’ Jon’s jarring, raucous beats were becoming a mainstay in the hip-hop world, but blending Usher’s silky vocals with Jon’s high-octane sound was still a chancy move for an R&B artist. Ultimately, though, it paid off. Not only did “Yeah!” earn him the top spot on the Billboard Hot 100 for 12 straight weeks, but the song’s success was a catalyst for Crunk&B, the synthy, uptempo sub-genre that dominated clubs in the early 2000s. After Usher, countless R&B stars, from Ciara to T-Pain, would launch careers on the foundation of Crunk&B, a sound that has since evolved and mellowed into the cool, dusky sounds of trap soul seen with artists such as Bryson Tiller.

Think of trap soul as Crunk&B’s mellowed, more subdued successor. Like crunk, it’s punchy and heavily steeped in hip-hop influences. But like Usher’s take on songs like “Yeah!” and “Follow Me,” trap soul has contoured edges and smoother textures. From 6LACK’s acerbic laments on love to H.E.R.’s dark, smoky vocals, current trends in R&B can be traced back to Usher’s techniques. In this regard, Usher’s mark on R&B is indelible; he not only inspired countless artists in the early 2000s, but also charted a course for today’s stars.

It Proved That Gossip Can Help Sell Records

Not only did Confessions inspire change on a sonic level, it also revamped the way in which R&B albums are marketed. As a lead single, “Yeah!” was a formidable appetizer for fans, but the gossip frenzy that surrounded Confessions set the album on a white-hot trajectory. As People reports, there were rumors that infidelity had been the cause of Usher's breakup with Thomas, and that he had allegedly fathered a child by his mistress. While the singer denied these allegations in interviews, his music still fanned the flames. "Yeah!" was the lead single, but "Confessions Pt. II", the song that stoked infidelity rumors, helped the album creep back to the top slot two months after its release. By the end of 2004, Confessions was the highest selling album of the year with just under eight million copies sold – no easy feat in an industry that was plagued by music piracy at the time.

There was a valuable lesson in the record's success: music sells albums, but so does gossip. It's a tactic other pop stars have seemingly learned to employ. Infidelity and divorce rumors fueled Beyoncé’s visual album Lemonade, and many fans eagerly bought the album wondering what she'd say about the reports. There were relationship rumors between Janelle Monae and Tessa Thompson that cropped up around the release of Monae's album Dirty Computer, and the pair cozied up in the video for “PYNK” — adding to the hype around the album. Ariana Grande’s thank u, next, meanwhile, came on the heels of her public split with Pete Davidson, and many people likely listened to the album hoping to find lyrics that centered around the singer’s relationship woes. Thanks in part to Confessions, the relationship between the gossip pages and the album charts seems to be stronger than before.

With its cocktail of pioneering sound, innovative "good guy gone bad" themes, and commercial victories, Usher’s Confessions achieved the kind of success that is truly career-defining. And fifteen years later, its impact still endures as strongly as ever.